Euro 2020 final will ‘absolutely’ go ahead with more than 60,000 fans at Wembley, says minister 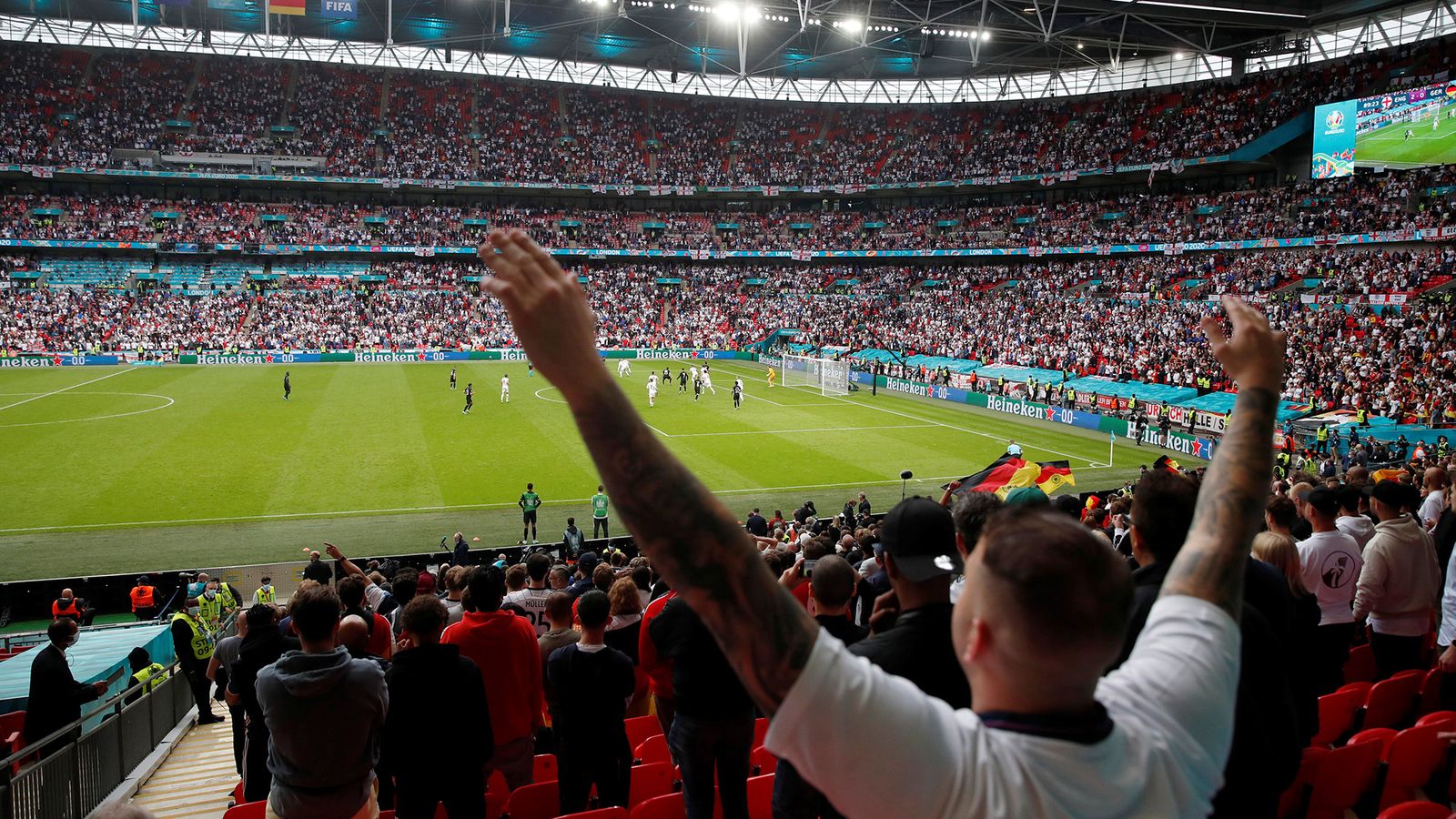 The Euro 2020 final at Wembley will go ahead with more than 60,000 fans, Kwasi Kwarteng has said, despite UEFA’s medical chief warning that COVID cases linked to tournament matches cannot be ruled out.

The business secretary told Sky News the fixture will “absolutely” take place as arranged, with the 90,000-seat stadium expected to be filled at 75% of its capacity, despite figures showing thousands of COVID incidences linked to supporters.

Image: Business Secretary Kwasi Kwarteng said plans for the Euro 2020 final to be held at Wembley will ‘absolutely’ go ahead

Of the 1,991 cases registered by Public Health Scotland (PHS), two-thirds said they had travelled to London to watch England v Scotland on 18 June.

A total of 397 of these were fans at the game at Wembley Stadium.

And UEFA’s medical chief has admitted it “cannot be excluded” that there will be instances linked to matches at Euro 2020 but said the same applies to any number of gatherings now permitted as restrictions ease across the continent.

But despite the warning and the outbreak linked to the previous tournament fixture, Mr Kwarteng said he is sure that at least 60,000 fans will be able to attend the final on Sunday 11 July due to the protection COVID vaccines offer.

Asked if the proposal will go ahead as planned, he told Sky News: “Absolutely. The key to the outbreak, the key to dealing with the coronavirus is the vaccination.

“So I’d urge anyone who hasn’t been vaccinated to get their first dose – anyone over 18 – and people should be encouraged to get the second dose.

Image: Over 60,000 fans are expected to attend the competition’s final on 11 July

“That is what is giving us the protection we need to fight this terrible virus.”

And UEFA also ruled out any alteration to the match schedule or capacity limits for the final stages after criticism from Germany and Italy regarding the games at Wembley.

Germany’s interior minister Horst Seehofer said earlier this week it was “irresponsible” to allow almost 42,000 into Wembley for his country’s last-16 match against England, with more than 60,000 set to be permitted to attend the semi-finals and final.

UEFA said in a statement: “All the remaining matches of Euro 2020 will go ahead according to the match schedule as planned.

“The mitigation measures implemented in each of the Euro 2020 host venues are fully aligned with the regulations set out by the competent local public health authorities.

Image: Scotland drew 0-0 with England at Wembley during the group round stage of the competition

“The final decisions with regards to the number of fans attending matches and the entry requirements to any of the host countries and host stadiums fall under the responsibility of the competent local authorities, and UEFA strictly follows any such measures.”

Cases in Scotland were tagged if they attended either a Euro 2020 organised event, such as a match at Hampden or Wembley or the fanzone at Glasgow Green, or an informal gathering such as a pub or a house party to watch a match.

It comes as the government has warned England fans to watch their side’s quarter-final clash with Ukraine on Saturday safely – and not attempt to travel to the match in Rome.

Speaking to Sky News, government minister Anne-Marie Trevelyan called on England fans to “watch from home and to cheer on the team as loudly as you can”.

England will play Ukraine in Italy on Saturday evening after knocking Germany out of the competition in front of 40,000 fans at Wembley.

If the Three Lions defeat their opponents, they would play their semi-final match back on home turf in London.

Speaking in the Commons on Thursday morning, Culture Secretary Oliver Dowden said the government’s aim is “to get everything back at full capacity” from 19 July and that “good progress” is being made towards this aim.

Conservative MP Chris Green asked if the so-called “terminus day” of 19 July means “an end to social distancing, an end to compulsory mask wearing and the full return to normal – not just for the end of July – but permanently”.

Mr Dowden replied: “We are making very good progress towards the 19th and we are hopeful and indeed confident that we will be able to remove – as planned at stage four – all the remaining legal limits on social contact, reopen the remaining closed settings, and remove all limits on weddings and other life events.

“And that is very much what I am working towards.”

Euro 2020: England fans travelling to Rome for quarter-final clash against Ukraine will not be allowed in stadium, warns Italian embassy