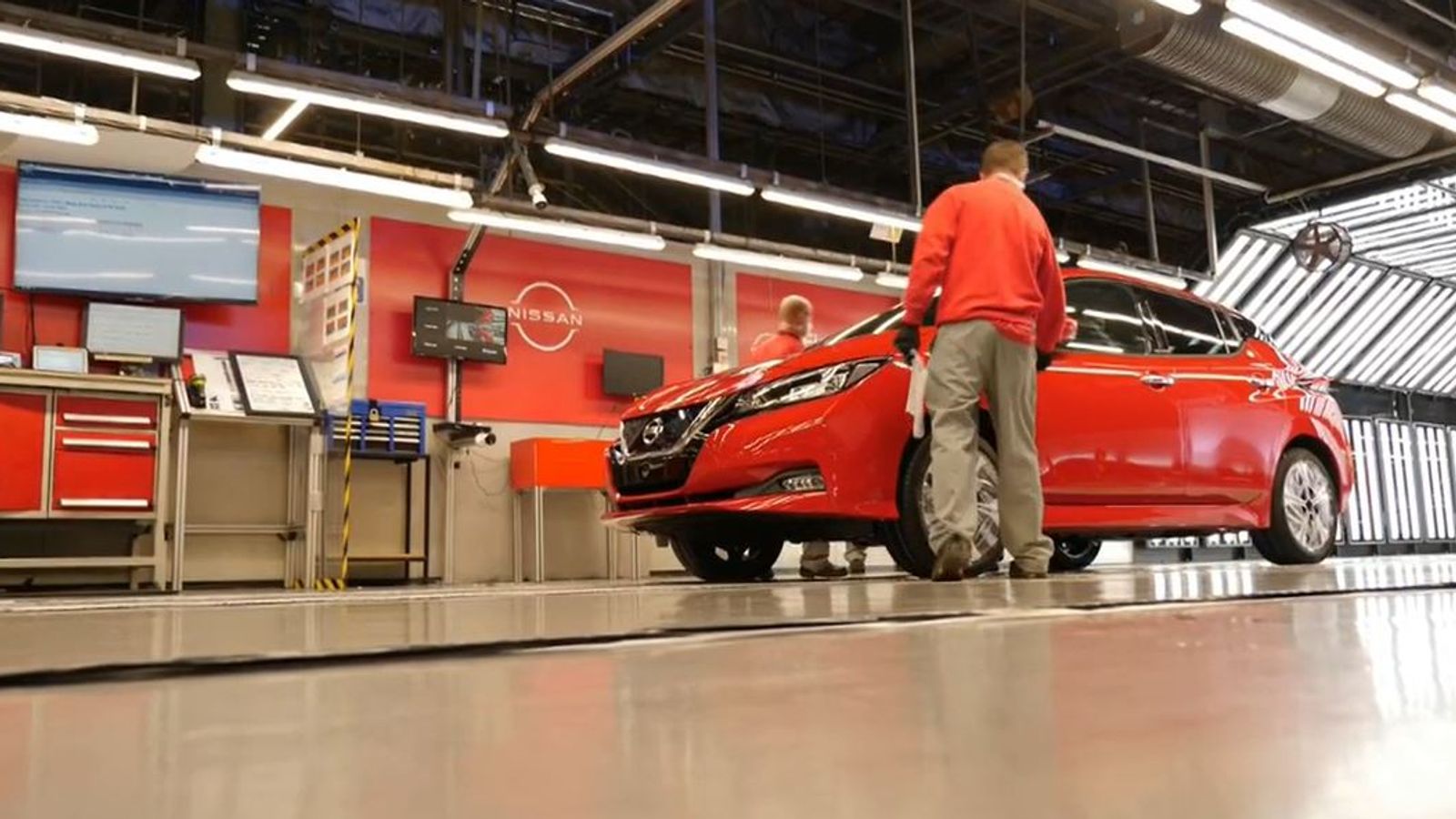 Nissan has announced details of a new battery “gigafactory” that will enable its Sunderland car plant to massively increase production of electric vehicles.

The Japanese manufacturer said the £1bn battery plant, built in partnership with Chinese manufacturer Envision, will create 900 jobs at Nissan plus 750 at Envision – and an overall 6,200 when the impact on suppliers is included.

Prime Minister Boris Johnson hailed Nissan’s investment as a “major vote of confidence in the UK” – but refused to be drawn on the extent to which it had been backed by the taxpayers.

The plant would become the largest battery “gigafactory” in the UK.

The term, coined by Tesla founder Elon Musk, comes from the unit of measurement representing billions.

The new plant will be much larger and is expected to have capacity for 9GWh, sufficient to produce batteries for up to 100,000 vehicles a year.

The announcement was welcomed by Britain’s car industry body, the Society of Motor Manufacturers and Traders – but it said more was needed for the UK to achieve net-zero goals.

Image: Workers on the production line at Nissan’s plant in Sunderland

As part of the announcement, Nissan is committing £432m to produce a new-generation all-electric vehicle in the UK which it says will build on the success of the Leaf models already produced at Sunderland.

The commitment to battery production at the UK’s largest car plant will be a fillip to manufacturing as the industry races to meet the government’s target of banning new petrol and diesel internal combustion engine vehicles by 2030.

The prime minister said: “Nissan’s announcement is a major vote of confidence in the UK and our highly-skilled workers in the North East.

“Building on over 30 years of history in the area, this is a pivotal moment in our electric vehicle revolution and securing its future for decades to come.”

Image: Nissan is also committing £432m to produce a new-generation all-electric vehicle in the UK

Asked about the extent of government support, the prime minister told reporters: “There are ongoing discussions about ways we can support people who are going to bring fantastic green technology into this country.

“Obviously they’re confidential but this is something that is a massive benefit to the UK economy.”

Nissan’s chief operating officer Ashwani Gupta, said: “This is a landmark day for Nissan, our partners, the UK and the automotive industry as a whole. Nissan EV36Zero will transform the idea of what is possible for our industry and set a roadmap for the future for all.”

UK battery production already lags well behind European competitors Germany and France with only one other gigafactory currently planned.

Britishvolt intends to build a plant on the former Blyth power station site in Northumberland promising 3,000 jobs and batteries for 300,000 vehicles a year.

Nissan believes investing in battery technology post-Brexit will give it a competitive advantage over its rivals.

PM gets stuck into factory work

Listen and subscribe to The Ian King Business Podcast here

New “rules-of-origin” requirements for vehicles set out in the Brexit deal mean that by 2027 vehicles with batteries produced outside the UK or the European Union will attract tariffs when exported to EU states.

By producing them in Sunderland, Nissan will ensure tariff-free access to European markets, as well as avoiding the financial and environmental costs of transporting batteries long distances.

Business Secretary Kwasi Kwarteng is in talks with Vauxhall owner Stellantis over securing electric vehicle manufacturing at the company’s Ellesmere Port plant when production of the current ICE Astra ends.

Stellantis says the 2030 ICE ban means making anything other than an electric vehicle at Ellesmere Port would not be viable, but it wants significant support to choose the North West over its other plants in Europe.

COVID-19: Calorie intake ‘rises in 90% of households’ during pandemic