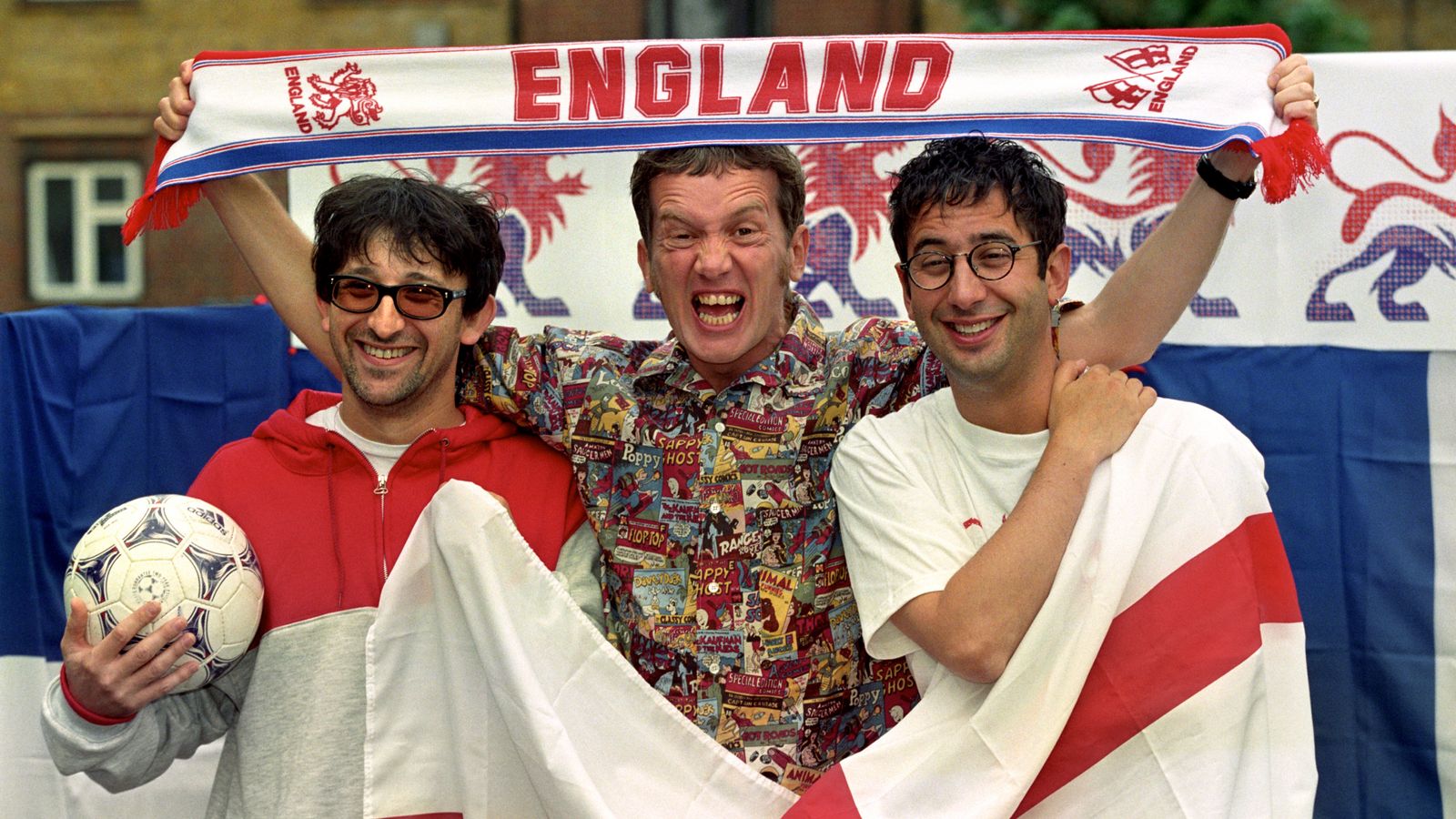 The famous tune Football’s Coming Home has been around for a quarter of a century.

“People walk past my window late at night singing it, it just makes me smile,” he said.

The Lightning Seeds frontman, who produced the iconic Three Lions song in the summer of 1996 along with comedians Frank Skinner and David Baddiel, told Sky News that he loves the fact it is still the defining track for England fans.

Gareth Southgate’s team now find themselves on the cusp of another Euros semi-final at Wembley.

Football still hasn’t yet come home but Broudie told Sky News: “There’s a certain poetic symmetry, 25 years on, same venue, there is something. You like to feel there’s a wind blowing on your side.

“One of the great things about ’96 and about now, even people who don’t really get into football that much now they become emotionally involved.

“You are having conversations with people who don’t know anything about football, they are quoting details at you that they don’t understand.

After life in lockdown, Broudie believes the timing of England’s latest success is perfect: “It is just a welcome change in a way.

“It is amazing actually how the players transform really in that context and in that environment – they sort of have different attributes.

Image: Football fans have been chanting the Three Lions lyrics for over two decades

“It is a really odd thing but I have just been absolutely enjoying it, I’ve started to believe more and more and more.

As the lyrics have been embraced by younger fans, Broudie is happy to sit back and just watch people enjoy the song which has travelled the world.

He said: “There’s a whole generation now who haven’t heard of me, probably never heard of Frank and David – it’s just like Happy Birthday. It’s what you sing as a fan and that’s great.”

Broudie explained that this generation of England players, who have the experience of doing well in the World Cup in Russia in 2018, can finally capitalise on the strength of their club football.

“There is no real unknown,” Broudie said. “We know we can compete against these players because we go in the Champions League and we play against them in our league every week and I think it has shaken that inferiority complex away.

“The previous generation was the generation that adjusted to that situation but this generation have grown up with it.”

The 4-0 victory over Ukraine sets up a semi-final against Denmark. So far England hasn’t even conceded a goal.

“Hopefully it is peaking and has not peaked,” Mr Broudie added.

“I don’t want to jinx anything but hopefully it will peak with us winning the final.”

Tommie Hoban happy with this signing for Crewe