COVID-19: PM heading for showdown with MPs amid predictions millions of Britons could get coronavirus this summer 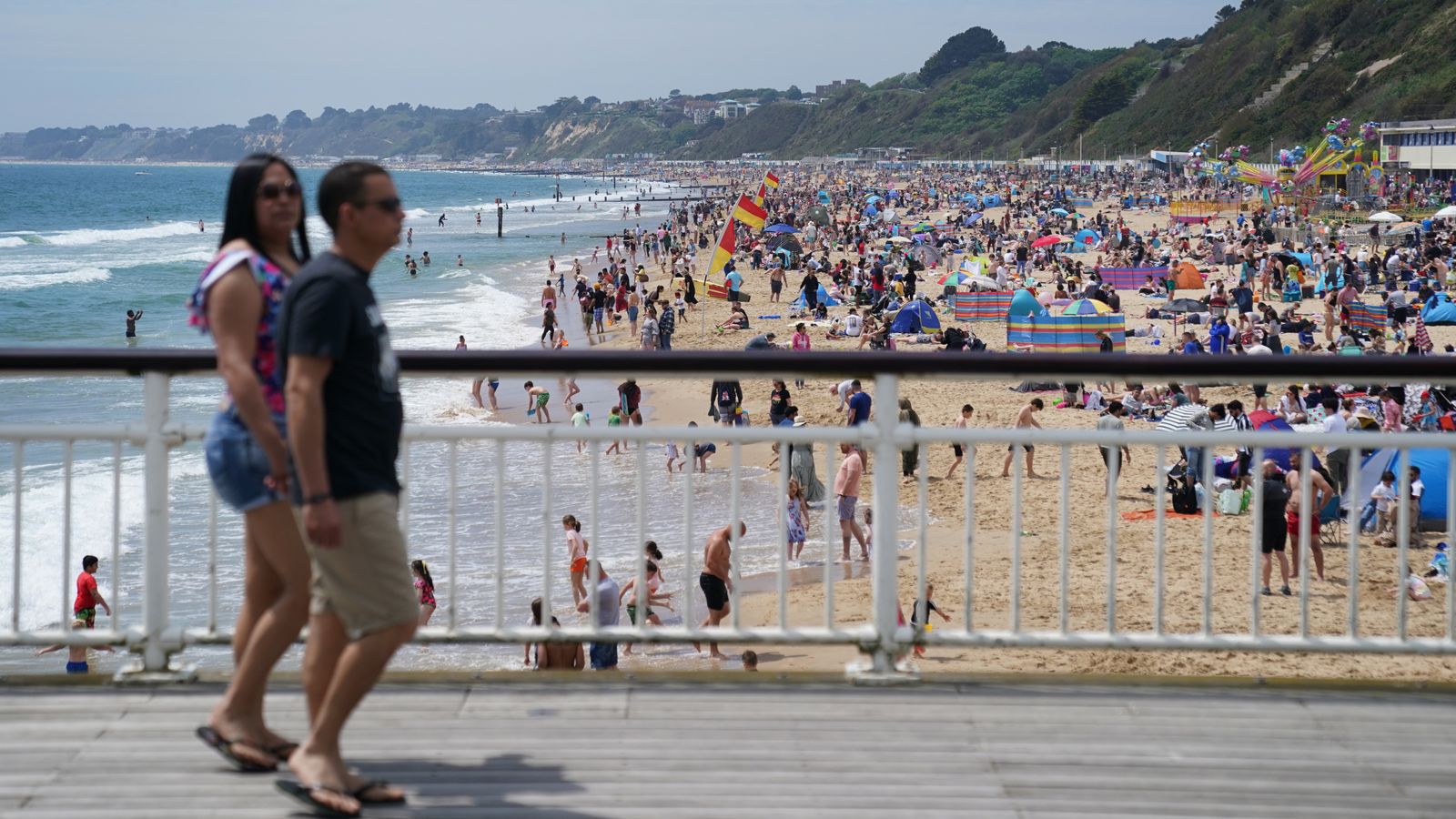 Boris Johnson is heading for a COVID showdown with MPs amid a backlash over a six-week wait for the ending of self-isolation rules.

This means they will have to stay at home for 10 days if they come into close contact with someone who has tested positive for coronavirus.

Health Secretary Sajid Javid has said infections could rise to more than 100,000 cases a day in August, meaning millions of Britons could get COVID-19 over the summer.

With the latest figures from NHS Test and Trace suggesting that an average of about three close contacts are being identified for every confirmed case at present, such a spike could lead to substantial increases in the number of people who have to self-isolate.

The UK hospitality industry claims it faces “carnage” because its mostly young workforce is not fully vaccinated, with staff forced to isolate despite not working the same shift as colleagues testing positive.

But amid the controversy, there could be better news for holidaymakers hoping to travel to amber list countries without having to quarantine for 10 days upon their return to the UK.

Sky News understands the amber list quarantine rule is likely to be lifted around the end of this month, though some reports suggest it could be ditched as early as 19 July.

As well as his weekly clash with Sir Keir Starmer at Prime Minister’s Questions, Mr Johnson faces a two-hour interrogation by a high-powered committee of senior MPs that will be dominated by COVID.

Is govt right to give up on controls?

The PM is appearing before the Liaison Committee – made up of the MPs who chair departmental select committees – for the third time this year, after tetchy sessions on his lockdown policy in January and March.

After a half-hour session on the COP26 environmental summit taking place later this year, Mr Johnson will be quizzed on COVID and the secondary impacts of the pandemic, such as the massive backlog on cancer treatment.

Besides questions on the row over self-isolation and quarantine rules, he is also likely to be quizzed on Matt Hancock’s humiliating exit from government and Dominic Cummings’ allegations about his handling of the pandemic.

‘If not now, then when?’ – PM on lifting restrictions

Among his interrogators on COVID will be some of the PM’s sharpest Tory critics of his policy on tackling the virus and his lockdown strategy: Caroline Nokes, Tom Tugendhat, Robert Halfon and Greg Clark.

She added: “The sector is experiencing severe staff shortages, compounded massively by the absence of team members who have been told to isolate despite not having shared shifts with colleagues who tested positive.

“Around 60% of our staff are aged between 15 to 34 and the vast majority will not have had the opportunity to receive both jabs by the 16 August.”

Former Tory leader Sir Iain Duncan Smith told The Daily Telegraph that the government was “splitting the message” and had “deliberately separated the good news from the bad”.

He said delaying changes to the self-isolation regime until next month meant “Freedom Day is delayed” and “makes a mockery” of the idea that 19 July represented the end of restrictions.

Sir Iain said: “Why would you even go to a pub [after step four of the lifting of lockdown on July 19]? This makes it worse.

“I wouldn’t go to a pub that wasn’t still having six around a table and social distancing, otherwise you run the risk of everyone in the pub being pinged and locked down.”

‘This disease is spiking’

The Liaison Committee hearing also comes less than 24 hours after a leading watchdog launched an investigation over the use of private emails by Mr Hancock and other ministers at the Department of Health and Social Care.

Launching the investigation, Information Commissioner Elizabeth Denham warned that anyone who “deliberately, altered or concealed” information could face criminal prosecution.

She said reports that ministers and senior officials were using private emails was concerning because the public would feel there may be a loss of transparency about decisions affecting them and their loved ones.

One of the ministers accused of using private emails is Lord Bethell, who is also facing a probe by the House of Lords Commissioner for Standards for sponsoring a parliamentary pass for Mr Hancock’s lover Gina Coladangelo.

Besides these two new inquiries, MPs on the Liaison Committee are likely to challenge the PM over his U-turn over Mr Hancock after photos and video showed him in an embrace with Ms Coladangelo in his office.

A week last Friday, when the first photo appeared in The Sun newspaper, the prime minister’s spokesman said Mr Johnson had accepted Mr Hancock’s apology and considered the matter closed.

But little more than 24 hours later, after furious protests from Conservative MPs, activists and party donors, Mr Hancock was forced to resign and former cabinet minister Sajid Javid returned to government as his successor.

MPs will want to question Mr Johnson about his bizarre claim two days later when he told reporters: “I read the story on Friday and we’ve got a new health secretary in post on Saturday and I think that’s about the right pace to proceed in a pandemic.”

Mr Johnson is also likely to be asked about a series of embarrassing attacks on him in recent weeks by his former Downing Street aide Dominic Cummings in a series of blogs and on twitter.

This week Mr Cummings wrote in a blog that ending all remaining coronavirus restrictions on 19 July would “obviously not” be the right decision and claimed Number 10 officials have “been told by scientific advisers not to do what they’re doing”.

And reigniting his feud with the prime minister, which has raged since Mr Cummings was forced out late last year, he said he knew Mr Johnson was “unfit to be PM” as “he’d told us”.

Last week he claimed he warned the PM and other Downing Street officials in May last year that he feared the government could be “negligently killing the most vulnerable” by not having effective testing plans in place.