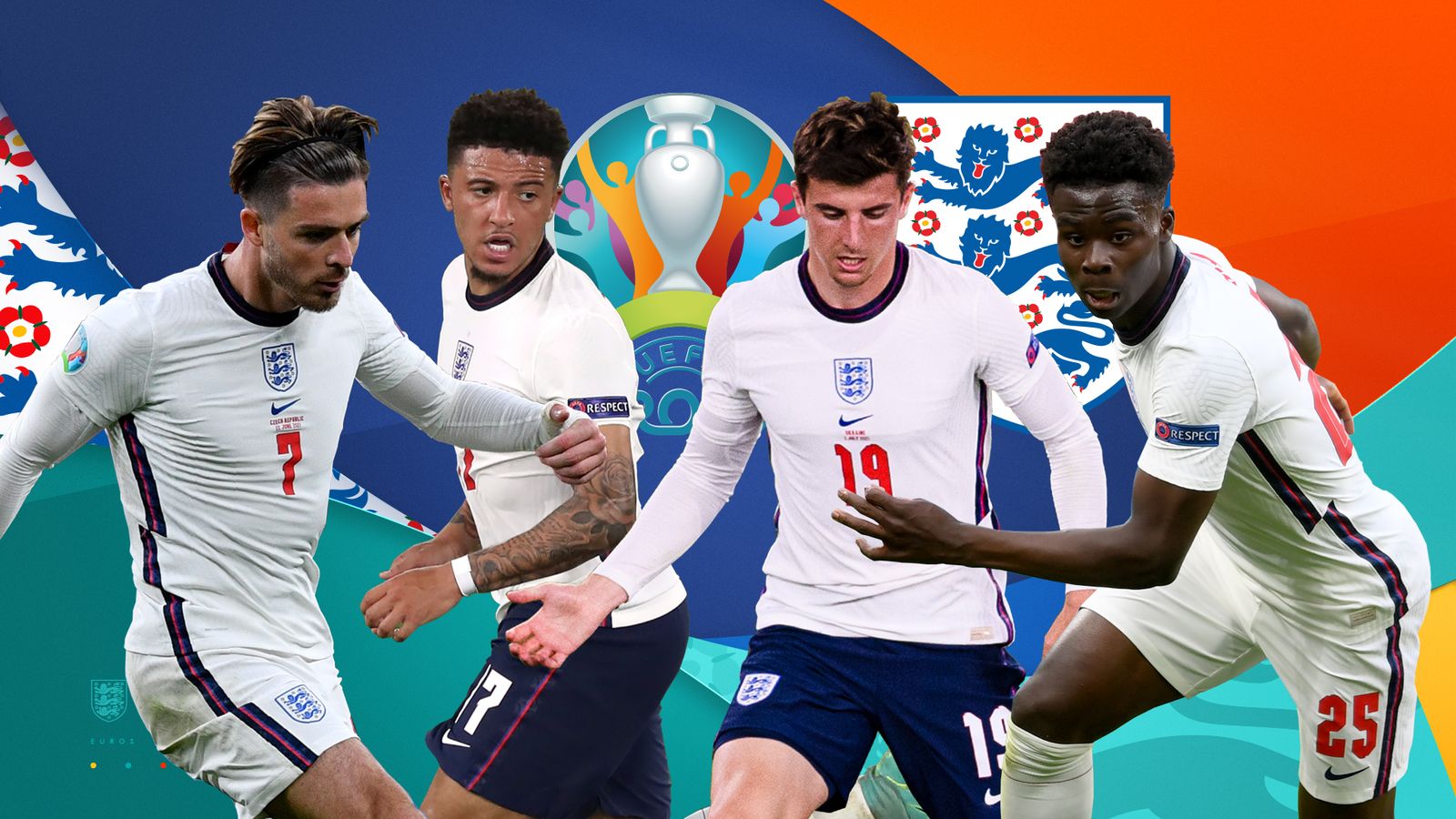 Raheem Sterling has been England’s standout player, and Harry Kane is back among the goals with the Golden Boot in sight.

Two-thirds of England’s three-pronged attack that will be tasked with overcoming Denmark in the semi-finals at Euro 2020 at Wembley on Wednesday looked nailed on, but what about the third and final spot?

Mason Mount, Phil Foden, Marcus Rashford, Jack Grealish, Bukayo Saka and Jadon Sancho have all been deployed in attack so far this tournament – but with Gareth Southgate notoriously keeping the nation guessing with his line-ups, don’t put it past the England manager to spring another surprise.

Ahead of England’s bid to reach a first major tournament final in 55 years, Sky Sports Football’s team of writers examine the options at Southgate’s disposal ahead of the showdown with Denmark.

Discussions over England team selection have never been as tepid as they are now, with so many strong “like-for-like” options on the substitutes’ bench.

How many England fans would have really strong objections if it were Jadon Sancho, Bukayo Saka, Phil Foden or Marcus Rashford starting in a wide attacking position on Wednesday, for example? It could be argued none of those players weakens the overall team package.

Raheem Sterling and Sancho regularly swapped wings at the Stadio Olimpico, and we’ve seen Kalvin Phillips at various times in the tournament be given licence to roam further forward from his holding midfield role, as he did in earning an assist for Sterling’s opening goal of the tournament against Croatia.

Saka, used by Arsenal in any position on the left flank, started on the right wing for England against Germany, and at one point in the second half found himself in the centre-back role as he tracked back to cut out a German counter-attack.

Kieran Trippier has played left-back and Kane has often dropped deeper into a No.10 role in games when he’s felt it more important to link up play, rather than stay up top as a focal point of the attack. For the football purist, all of this has joyous echoes of the “total football” played by Johan Cruyff’s Netherlands in the 1970s, where starting positions were temporary, and every player could fill in for a team-mate elsewhere on the pitch.

For Gareth Southgate, it’s a pragmatic rather than a philosophical approach. He expects every player to offer a role defensively in the team, and someone may be asked to play out of position if their individual attributes are specifically suited to exploit a weakness, or to nullify a strength, in the opposition.

That’s why Sancho got his first start in tournament football against Ukraine. Southgate wanted to stretch their defence with a right-footed attacker on the right wing, and he wanted someone with pace and the ability to commit Ukraine’s defenders – Sancho was the perfect fit.

The early indications are that Southgate will resist the persistent clamour for Jack Grealish to start against Denmark, instead keeping him as the “60-minute man” to come on if England are chasing a goal. Rather, England’s boss is likely to stand strong behind Mason Mount, who has again been consistently impressive throughout the tournament in the more creative central midfield role.

Predicting Southgate’s starting XI has proven to be the impossible task at this tournament. Not a game has gone by without a surprise selection featuring. Jadon Sancho was the latest curve ball, coming out of the wilderness to start the quarter-final win over Ukraine.

He impressed too, with some nice link play from the right of the front three. But Saka is fit again. And what about Southgate’s full-time embrace of Grealish, when he appeared to have a message of “now you have a role to play at Wembley” for the fan favourite? Don’t forget Rashford and Foden, either!

With so many attacking options at his disposal, it’s not a surprise Southgate’s line-up is so hard to call but against Denmark there is an argument for returning to a back three and a player proven at bringing midfield and attack together – which you need in that setup – is Mount.

He’s a favourite of Southgate’s and for good reasons: hard running, precise pressing, creativity and a knack of taking up dangerous positions where, more often than not, he finds the net. Service and support is what Sterling and Harry Kane need in a 3-4-3 and Mount – who would come inside from the flanks to take up a No 10 role at times – can provide both of those elements.

Saka’s emergence was one of the sparks that got England’s tournament up and running and his claims to start against Denmark – now he’s fully fit – will be difficult for Southgate to ignore.

Thrown into the spotlight in the final group game against Czech Republic, Saka’s bravery on the ball, his energy and his direct style was eye-catching, and it breathed new life into England’s attacking play during the 1-0 victory. He called it “the biggest night of his career” so far, but bigger tests were to come as he kept his place for the last 16 showdown with Germany at Wembley.

How would the 19-year-old handle the step up in class of the opponents and the big occasion at Wembley? He was totally unfazed, putting in another excellent performance as England created history, running out 2-0 winners against Joachim Low’s side.

He sustained a knock in training ahead of England’s emphatic 4-0 quarter-final win over Ukraine and that allowed Sancho the opportunity to impress, but after being declared fit, it’s time for Saka to be unleashed once again.

His pace and trickery can cause Denmark’s three-man defence plenty of problems, just as it did Germany’s back three. Going the other way, he also has the defensive game and discipline to be able to help deal with the threat of Joakim Maehle, who has been extremely influential in the left-wing back role for Denmark.

This is another huge Wembley occasion and Saka has already shown he can handle the pressure. He deserves another chance to dazzle as England go in search of yet more history.

Jack Wilkinson: Southgate has to stick with Sancho

The widespread confusion, particularly among those who regularly watch Bundesliga football, as to why Sancho had only six minutes of football under his belt at Euro 2020 before England’s quarter-final with Ukraine was overwhelmingly justified by the winger’s performance in Rome.

Harry Kane and Luke Shaw rightfully earned the plaudits for their starring roles as England ran riot in the Italian capital, but Sancho’s first start at this summer’s tournament spoke volumes of the 21-year-old’s ability and temperament, and left him hard to ignore for the semi-final showdown with Denmark.

Sancho had to juggle the frustration of barely featuring at Euro 2020 with the excitement and uncertainty of his impending transfer from Borussia Dortmund to Manchester United, all of which made the manner in which he tormented the Ukrainian defence all the more impressive.

Despite England’s biggest-ever victory in a knockout game at a major tournament, Southgate’s risk-averse approach continues to draw criticism. England supporters want the shackles taken off their team.

By persisting with Sancho against the Danes, the England boss could stick with the core of players who have got England to this stage so assuredly, but also introduce the attacking flare to propel the Three Lions into the final.

Charlotte Marsh: Saka can step up

England’s victory against Germany in the last 16 was a historic evening, but one of the most pleasing aspects was the brilliance of Saka. He had already been a breath of fresh air against the Czech Republic, and his fearlessness during one of the biggest football rivalries was astounding.

He carried Arsenal for much of the 2020/21 season and given his chance, he proved why Gunners fans love him so much. His direct runs can bamboozle even the most experienced of defences – just ask Mats Hummels and Antonio Rudiger.

It was a shame he missed out against Ukraine with a knock, but it will have given Saka the chance to recuperate. He has proven that he can handle the pressure of a major international tournament and Southgate can rely on the Arsenal midfielder to bring the spark in England’s attack.

He came out on top against Germany’s back three, and you’d back him to do the same against a similar Danish system. His speed and defensive capabilities will also help match up against the Denmark wing-backs too as England look to stifle more threats down the channels.

Saka has already proven he can step up and perform under pressure, and I’m backing him to do so again in Wednesday’s semi-final.

Image: Mason Mount missed the Czech game after having to self-isolate. Pic: AP

Southgate faces an unenviable task when choosing who plays in England’s attack. There is no line-up to satisfy everyone. Some players will feel hard done by; many fans will feel disappointed.

But I can’t see him leaving out a fit and available Mount and given how I’d like him to set up his team for this game – more on that below – the Chelsea man is my pick to join Sterling and Kane in the front three.

It means leaving Sancho, Grealish and the rest on the bench, but Mount is simply too important to this side to play a supporting role.

He is instrumental to Southgate’s pressing game and offers smart distribution too – his 90% pass completion rate at this tournament has helped to bridge England’s midfield and attack.

Mount sets the tempo in and out of possession. He provides creativity and goal threat and has earned Southgate’s trust. Without him floating between the lines, England’s fluency would suffer.

Image: Gareth Southgate has options aplenty on the bench

Gerard Brand: Mount at No.10

England need to play the occasion, as well as the opponent. The desire for flat-out entertainment has waned as Southgate’s pragmatic approach brings more success, and nullifying Denmark’s strengths while playing to England’s own makes sense.

England should match Denmark’s back three with wing backs – so Kyle Walker, John Stones and Harry Maguire in the middle, with Trippier right and Shaw left.

Slightly overlooked in the elation of beating Germany was the effectiveness in which England shut off wing-backs Joshua Kimmich and Robin Gosens. It worked gloriously well, and I don’t know why the approach for Maehle and Jens Styger should be any different.

Denmark love to cross, so shut that avenue off and half the battle is won.

That clearly has a knock-on effect in forward areas; Mount should keep his place, but in more of a No 10 role. I have little doubt Grealish will play a big part in this game, but from the bench.

Forget the “we should focus on ourselves, not them” narrative. This is a major tournament semi-final, and Denmark haven’t got here by chance. England have more quality, and should prevail, but ignorance towards the opponent has stung them before.

Image: Bukayo Saka has recovered after picking up a slight injury. Pic: AP

Sancho took his opportunity to impress in Rome, but Saka is back available after missing the quarter-final with a minor injury. Denmark coach Kasper Hjulmand has used a natural right-footer at left wing-back, Maehle, and Southgate could set up to minimise his impact.

Foden started the opening two group games but was absent against the Czech Republic with him walking the suspension tightrope and was unused against Ukraine. Should the Manchester City man be drafted back in, he will be fresh and eager to seize his opportunity.

I don’t see him reverting to a back three in the same way he matched up with Germany in the last 16. He will look to pin back Maehle, and Saka offers both an attacking threat and the ability to track back.

Southgate will be aware of how Denmark faded against the Czechs and have conceded all five of their goals in the second half of matches in the tournament. Having the likes of Foden, Grealish and Sancho in reserve could prove a shrewd move.