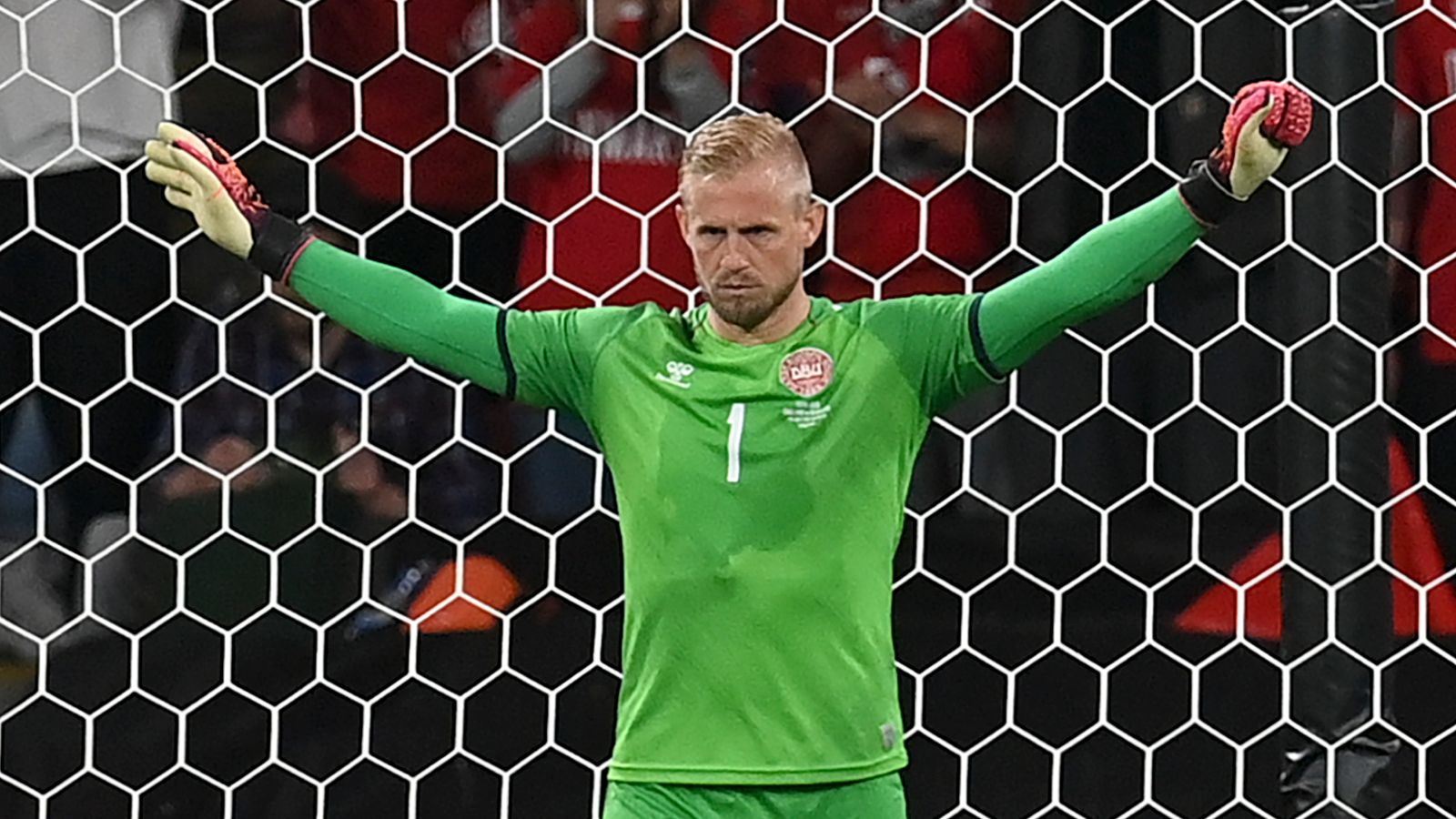 UEFA has opened disciplinary proceedings against England after fans shone a laser at Denmark goalkeeper Kasper Schmeichel during the Euro 2020 semi-final and booed the Scandinavian country’s national anthem.

A laser pointer was directed at Schmeichel before he saved Harry Kane’s extra-time penalty – only for the England captain to score the rebound.

UEFA is also investigating the lighting of fireworks inside Wembley stadium during the match.

Prime Minister Boris Johnson’s official spokesman condemned the use of the laser by a supporter.

“UEFA are looking into that, that’s a matter for them but it’s not something we would want to see,” Mr Johnson said.

Image: Harry Kane converted the rebound after his penalty kicked was saved

He also urged fans not to boo teams during their national anthem.

England won the semi-final tie 2-1 last night after a match where they had the lion’s share of the chances.

They will now face Italy, who are unbeaten in nearly three years, in the final at Wembley on Sunday.

If England secure victory it will mark the first time they have won a major tournament since the World Cup in 1966.

Three Lions manager Gareth Southgate has said his team deserve to be in the final, after Denmark boss Kasper Hjulmand said he believed England should never been awarded the penalty that helped secure them the tie.

Southgate said: “We were so smooth through the quarter-final and relatively unscathed through the second round.

“We knew that at some point we were going to concede and we would have to respond.

“Denmark have had an incredible tournament. I have got to give them huge credit.

“But I think on the balance of play when you look at the number of saves we forced the goalkeeper to make and long periods of the game where I felt we were the biggest threat, I think we deserved it.”

The all-important spot kick was awarded after England attacker Raheem Sterling was judged to have been tripped in the area, with the decision confirmed by VAR.

You wouldn’t have found any England fans questioning the penalty decision, and there were wild celebrations around the UK as they watched Southgate’s side make history.

In London’s Piccadilly Circus people were pictured on top of buses, while euphoria in the Trafalgar Square fan zone rivalled the celebrations inside Wembley seven miles away.

And across the nation, streets were strewn with empty plastic pint glasses, food cartons, laughing gas canisters and other rubbish when the celebrations had died down.

Thousand of England fans will now be desperate to know if they can get their hands on tickets for the historic match.

Social distancing rules and travel restrictions have meant many fans have been unable to watch their side play live during the delayed tournament.

And some of those who got seats in the initial ballot were left disappointed when they lost their tickets due to reduced stadium capacities.