Euro 2020 final: How can you get a ticket for Sunday’s historic game at Wembley? 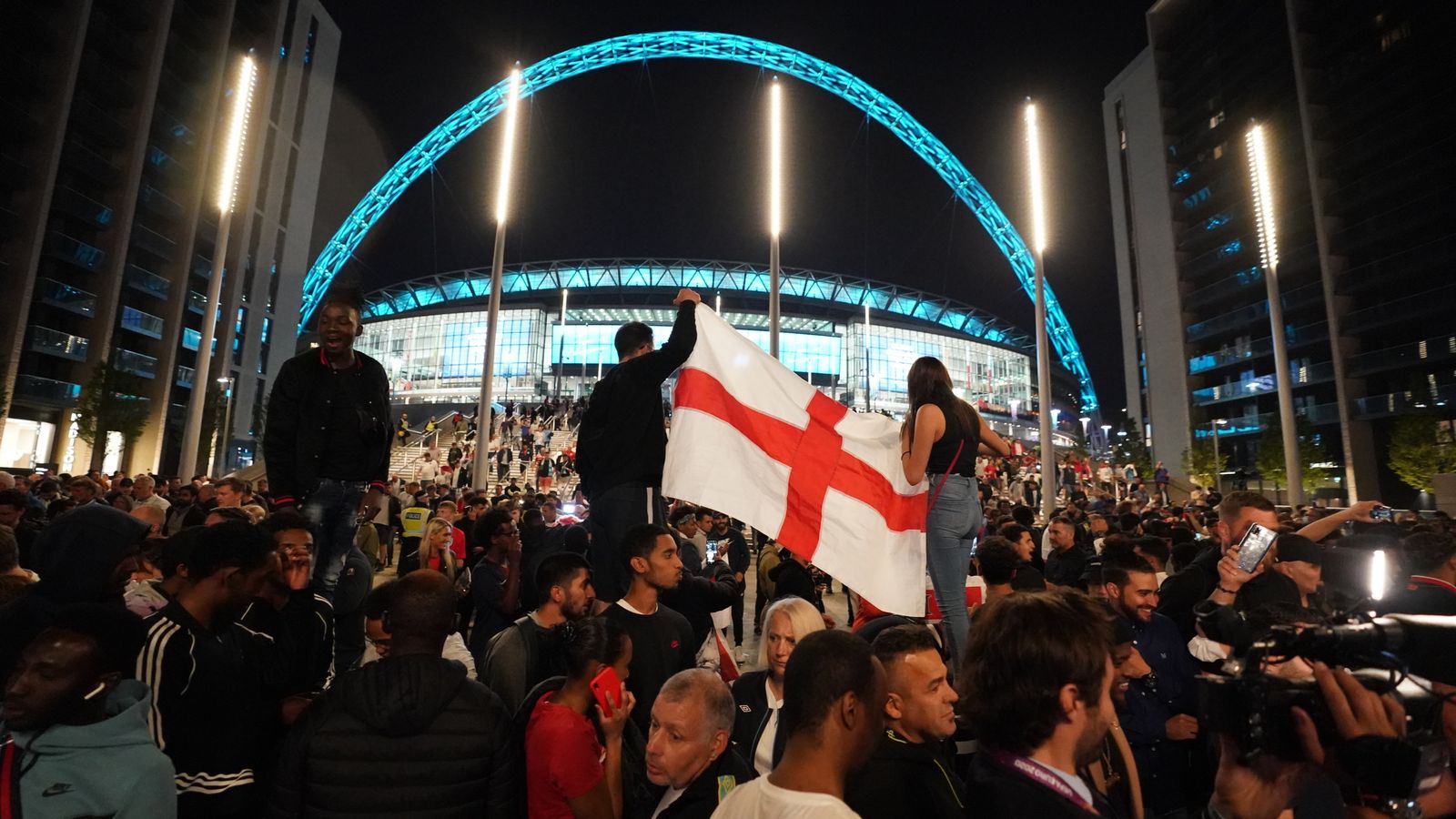 Thousands of England fans will be desperate to know if they can get their hands on tickets for Sunday’s Euro 2020 final at Wembley.

Gareth Southgate’s men booked their place to take on Italy after a 2-1 extra time win against Denmark.

Social distancing rules and travel restrictions have meant many fans have been unable to watch their side play live during the delayed tournament.

And some of those who got seats in the initial ballot were left disappointed when they lost their tickets due to reduced stadium capacities.

So how can you get a seat at Wembley to cheer on England (or Italy) in the Euro 2020 final?

Image: The championships were postponed because of the COVID pandemic Pic: UEFA

As they have been throughout the tournament, any tickets that are returned for the final will be made available for purchase on UEFA’s official website.

The majority have already been bought, although any increase in capacity would lead to more being made available.

Anyone who got tickets during the initial process in 2019 but then had them cancelled due to a reduced capacity at the stadium, or others who have registered as a fan of either of the teams involved in the final, will receive an email from UEFA if tickets are made available.

Anyone else wanting to go will have to fork out a lot of cash. The most expensive tickets listed on the official site are 945 euros (£808) while the cheapest for those registered to the Fans First scheme are priced at 95 euros (£81).

At the time of writing, there were no tickets available on the official site.

Tickets are being sold for astronomical figures on reselling websites. The highest priced tickets for Sunday’s match on eBay was £15,000 for a pair – as seen by Sky News. This is despite UEFA’s attempts to crack down on ticket touts.

Adam French, Which? Consumer Rights Expert, said: “Even though some websites claim to offer tickets from ‘100%’ trusted sellers, this is often not the case and you need to be aware that UEFA’s terms and conditions state it can void tickets sold on unofficial sites.

“So there’s no guarantee that you will get your tickets or entry to the match and you could be left thousands of pounds out of pocket.

“If you’re not lucky enough to get your hands on a ticket through the official website you might be better off saving your cash and making plans to watch Gareth Southgate and the lads take on Italy with family and friends at home or in the pub. If you insist on trying your luck and buying tickets for the match from an unofficial seller, make sure to pay with a credit card for purchases over £100 so you stand a better chance of getting a refund if things go wrong.”

London mayor Sadiq Khan has said one pair of tickets will be made available for anybody signing up for their first COVID-19 vaccine. Any Londoners who post on social media about having booked or received their first dose will be automatically entered into the draw.

Can Italy fans get a ticket?

Apart from UK-based Italy supporters, only a maximum of 1,000 are to be allowed to travel due to COVID restrictions.

A special deal will limit their fans to 12 hours on UK soil, according to Italian football authorities, with special charter flights and transport laid on to get them to the stadium.

They must also give negative COVID tests before and after the journey and isolate for five days when they return to Italy.

A statement on UEFA’s website said: “For travel guidelines, ticket buyers are responsible for checking and verifying the latest position by regularly reading national and international government websites for the latest, accurate information.

“There will be no exemptions for ticket buyers.”