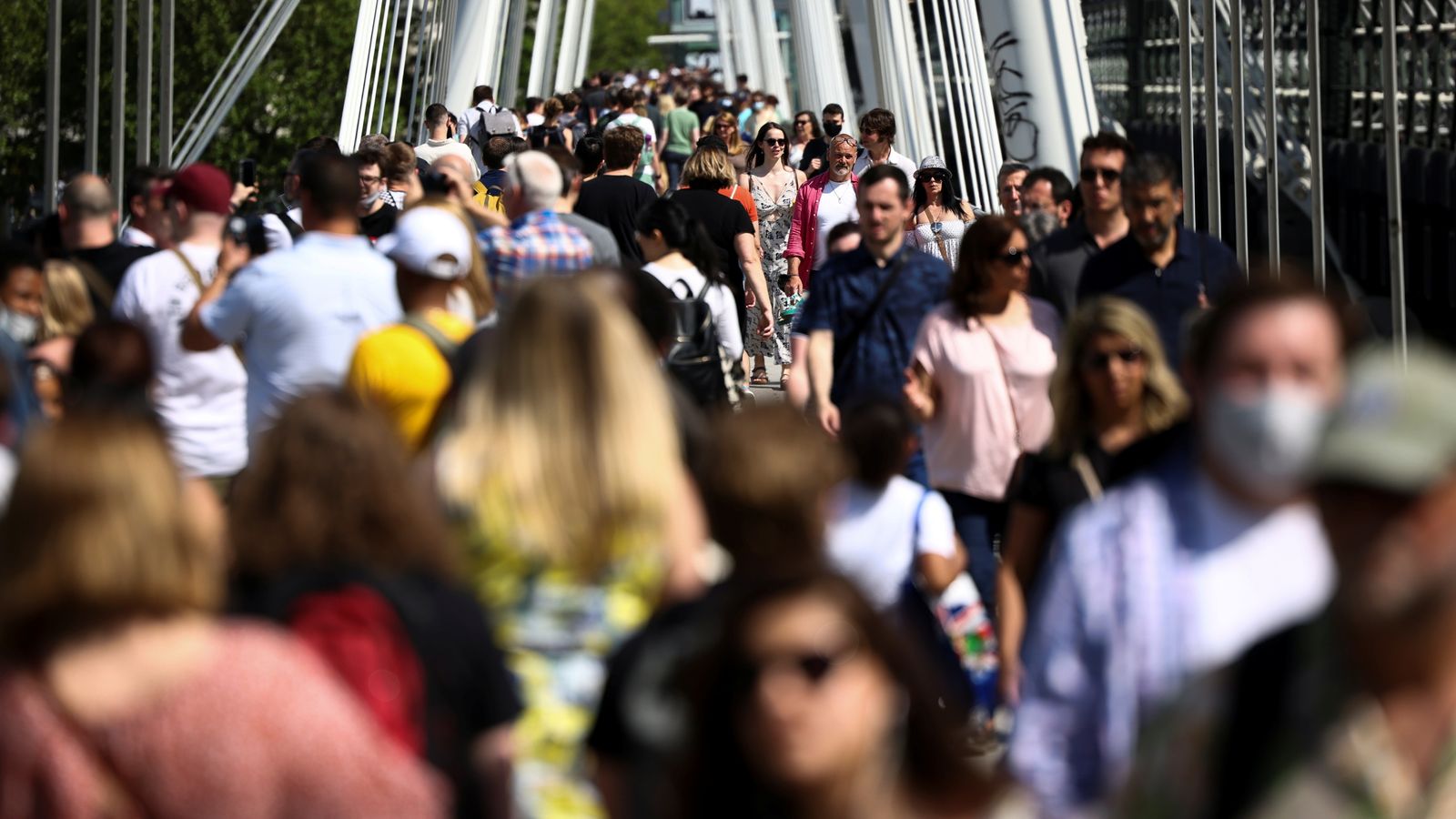 England’s R number has risen slightly to between 1.2 and 1.5, as coronavirus infection rates increased sharply across the UK – with three home nations recording their highest in more than four months.

The R number – which represents the average number of people each COVID-positive person goes on to infect – was between 1.1 and 1.3 last week.

An outbreak can grow exponentially when the figure is above 1. When it’s below 1, it means it’s shrinking.

The current estimate means that, on average, every 10 people infected will go on to infect between 12 and 15 others.

Meanwhile, the growth rate shows the number of new infections is growing by between 3% and 7% every day.

It comes after the Office for National Statistics (ONS) reported that around one in 160 people in England had coronavirus in the week to 3 July.

That’s up from one in 260 in the previous week and the highest since the week to 19 February.

Scotland now has the highest infection rate of all the home nations with around one in 100 people in private households having COVID-19 in the week to 3 July – up from one in 150 the previous week and the highest since 16 January.

And in Northern Ireland, the estimate is one in 300 people – up from one in 670 and the highest since 3 April.

When modelling the level of infection among different age ranges in England, the ONS said rates have increased for all groups.

Around one in 45 people from school year 12 to age 24 are estimated to have had COVID-19 in the week to 3 July, the highest positivity rate for any age group.

It also said the percentage of those testing positive has gone up in all regions of England, with the North East and North West likely to return the highest proportion of positive results for coronavirus – around one in 80 people, compared with around one in 350 in eastern England.

The most comprehensive weekly stats on the COVID epidemic show another surge in infections – but cases may not be rising quite as fast as they have been recently.

Random swabs suggest just over 400,000 people in the UK had the virus in the seven days leading up to 3 July, a rise of 56% on the previous week.

But that’s down from a 68% rise the week before that.

It’s far too soon to say the third wave is easing off though – the margin of error is quite large in a survey like this.

The data shows the North East now has the highest rates in England, overtaking the North West.

Rates in the East of England are less than a quarter of what they are in the North East.

The ONS data, which does not cover care homes and hospitals, is based on swab tests from thousands of people regardless of whether or not they have symptoms.

The estimates published by the ONS will be studied carefully by Boris Johnson as he prepares to confirm whether the remaining COVID restrictions in England will be lifted.

This plan to ease the rules further us expected to accelerate the rapid spread of the Delta variant, which is already causing a noticeable uptick in infections.

Rules around face masks and social distancing are expected to be dropped, as well as limits on hospitality and guidance on working from home, from 19 July.

More than 100 scientists have condemned the government’s plans to abandon coronavirus restrictions – describing it as a “dangerous and unethical experiment” in a letter published in The Lancet this week.

They warned the exponential growth of COVID-19 “will likely continue until millions more are infected, leaving hundreds of thousands with long-term illness and disability” and that the strategy risks “the emergence of vaccine-resistant variants”.

Chadwick Boseman appears in trailer for his final appearance as T’Challa in Marvel’s new show What If…?