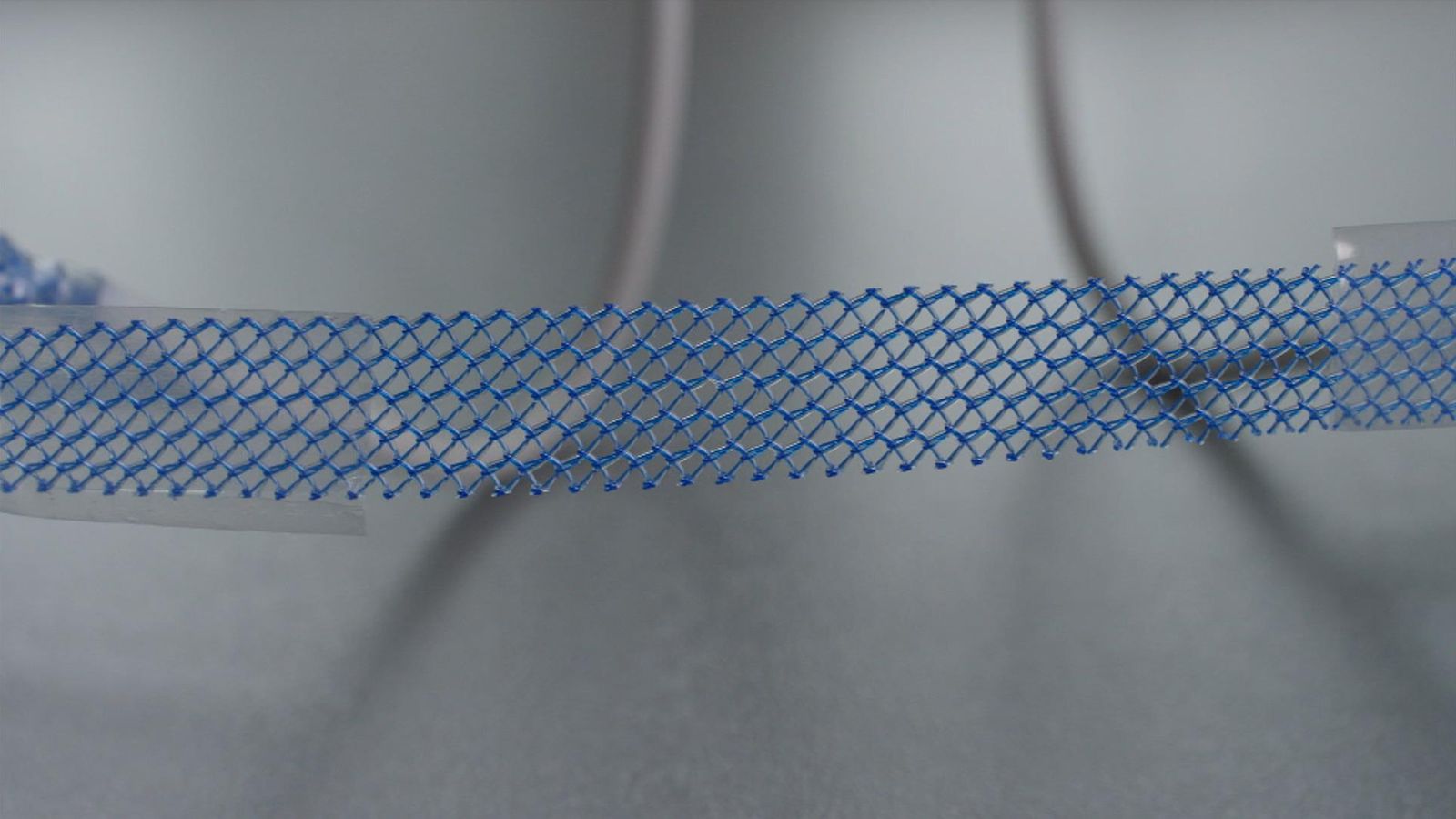 The government has ruled out any redress scheme for women impacted by three NHS scandals.

During a backbench debate in the House of Commons on Thursday, the government was urged to implement recommendations set out a year ago by a scathing report into vaginal mesh implants, the anti-epilepsy drug sodium valproate, and the hormone pregnancy test, Primodos.

Image: Laini Birch suffered life-changing complications as a result of having a vaginal mesh implant

In July 2020, an independent committee led by Baroness Cumberlege found women had been caused “avoidable harm” and described how patients were “dismissed” or “overlooked”.

The review set out nine recommendations, including establishing a new independent redress agency for those harmed by medicines and medical devices based on models operating effectively in other countries.

But, speaking in Thursday’s debate, minister for patient safety Nadine Dorries ruled this out.

“I was honest when I stood here and said how desperately sorry I was and how harrowing those stories were, and I am not going to stand at this despatch box and say that we are reviewing all the recommendations, which is what has happened in the past,” she said.

“I will be honest: we are not going to accept the redress agency in recommendation three, or the taskforce.

“No government have ever asked someone to chair or undertake a review and then asked those who conducted the review to implement the recommendations on behalf of the government. That has never happened before.

Labour MP Emma Hardy, chair of the all-party parliamentary group on surgical mesh, said: “It is really disappointing as at the moment the pressure is on the women.

“The pressure is on them, the financial and emotional cost of having to go to court to seek the justice that they need and we need a fairer system.”

Image: Health minister Nadine Dorries said the government would not set up a redress agency

Laini Birch, 50, is one of thousands of women who have suffered life-changing complications as a result of having a vaginal mesh implant.

She had the procedure in 2017 to help cure her mild incontinence and prolapse.

She said she was in immediate pain after the operation and after two years of suffering, found out the plastic mesh had eroded and sliced into her bladder.

“I had a brain haemorrhage when I was 25 and I got over that quicker,” she said.

“I don’t think I will ever get over this. At the worst point when I first had the operation and when all the inflammation started I was really, really down and the pain was so bad I couldn’t walk and didn’t always get to the toilet on time.

Ms Birch admits she has had suicidal thoughts after the procedure left her reliant on her teenage daughter, Iona, to care for her.

“I just felt like a burden on everybody. I didn’t want to be here but I do now,” she added.

“That’s what upset me. I used to be such a happy, bubbly person and now I am a depressive who never leaves home.”

Image: Kath Sansom, founder of campaign group Sling The Mesh, said there was a ‘sense of gloom’

Iona said she had to take her mother to hospital every day for a week before doctors listened to her concerns.

She said: “I had to be persistent because they weren’t listening. Obviously I was younger then so they thought ‘she’s only young, she doesn’t really know’.”

When a specialist finally saw Ms Birch and assessed her they found the mesh was in her bladder and was touching her bowel.

Iona added: “It was heart-breaking when mum would ask if she was going to be ok but I didn’t know myself what the outcome would be.

“I had to leave college because it got to the point where I was scared to leave her on her own.”

The government has issued an apology for regulatory failings but campaigners are calling for the nine recommendations set out by the review to be addressed in full.

Kath Sansom, founder of campaign group Sling The Mesh, said: “Last year there was such a sense of validation and celebration that our voices had been heard and now there is a feeling of frustration and sense of gloom.

“Specialist mesh centres have been set up in name only but there has been no training and we are hearing that some surgeons are still denying mesh is a problem.

“The government has refused to set up an redress agency so we are waiting to hear if there will actually be any money for those women who have lost so much in terms of their health but also can no longer work or lost money in savings paying for operations.”

Image: One of the main concerns of campaigners is the lack of evidence on the risks of mesh surgery

One of the main concerns is the lack of evidence on the risks of mesh surgery.

Ms Sansom added: “Mesh for stress incontinence was suspended in 2018 and we believe it should not be brought back until a retrospective audit is carried out until we know the true scale of complications.

“The Scottish government has pledged to never bring it back. Sadly, surgeons in England are pushing for it to be used again.”

The Department of Health and Social Care said it is working to implement five of the report’s nine recommendations and considering the others.