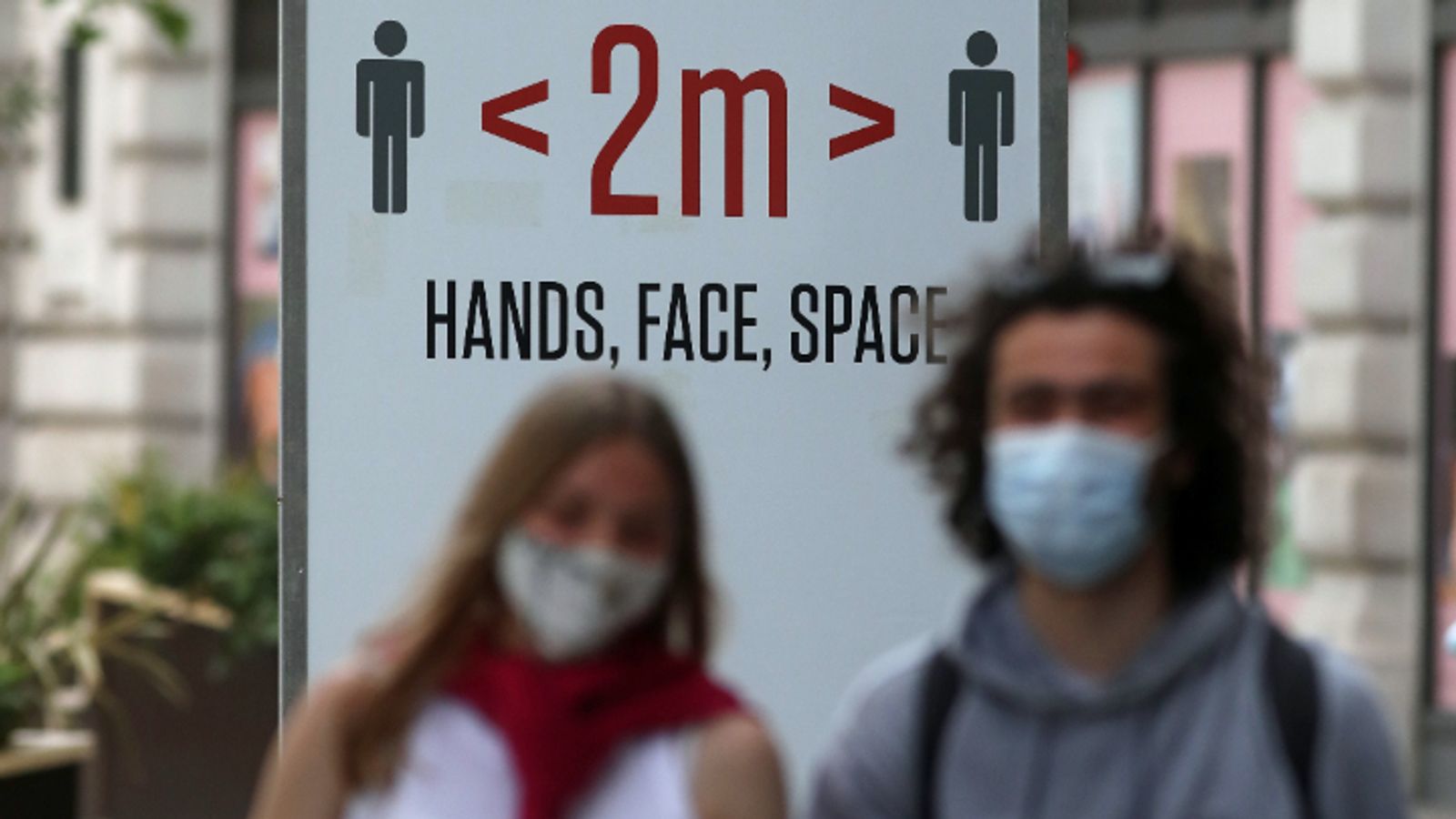 England will move to the fourth and final stage of the government’s roadmap for lifting lockdown restrictions in a week’s time, the health secretary has confirmed to MPs.

In what Sajid Javid said was a “major milestone”, the move to step four on 19 July will see social distancing rules and limits on social contact removed across the country.

And all remaining businesses that have been closed during the pandemic, such as nightclubs, will be allowed to reopen.

“We’ve all be yearning to get there and we all want this to be a one-way journey,” Mr Javid told the House of Commons.

The health secretary cautioned there could be as many as 100,000 COVID cases a day later this summer.

But Mr Javid said, on the evidence before him, he did not “believe that infection rates will put unsustainable pressure on the NHS”.

This was due to the “severely weakened” link between cases, hospitalisations and deaths as a result of the vaccine rollout, he added.

Asked by former health secretary Jeremy Hunt if he would take action if the coronavirus situation deteriorates, Mr Javid replied: “If that risk matrix changes, for example, with variants of concern, we will not hesitate to take the appropriate action.”

On Monday, the UK reported 34,471 new COVID-19 cases and six more coronavirus-related deaths in the latest 24-hour period. It is the sixth day in a row where total cases have been more than 30,000.

This time last week Sajid Javid told the House of Commons the government had “concluded that we do not think using certification as a condition of entry is the way to go”.

Now he is telling businesses and organisers of large indoor gatherings in England that after 19 July they will be “encouraged” to use certification after all.

Many of those planning for reopening places like nightclubs in seven days’ time will see that as an abrupt change of message, and one which could create significant operational headaches.

The government will argue Mr Javid’s comments last week related to a decision about whether to make it a legal requirement for venues to check either vaccine status or a negative test result.

On that front nothing has changed – there will be no legal requirement, and ministers will say it was always clear businesses would be able to use certification at their own discretion. But there is a difference between saying certification can be used, and saying it should be used.

Mr Javid told MPs it was the “right time” to go to step four, adding: “If not now, when? There will never be a perfect time to take this step because we simply cannot eradicate this virus.”

Speaking later at a Downing Street news conference, Boris Johnson said it was “absolutely vital that we proceed now with caution”.

“I cannot say this powerfully or emphatically enough: this pandemic is not over,” the prime minister said.

“This disease, coronavirus, continues to carry risks for you and your family.

“We cannot simply revert instantly, from Monday 19 July, to life as it was before COVID.”

And he did not rule out introducing restrictions again, saying: “If we are seeing very exceptional circumstances, the arrival of a new variant that we haven’t bargained for, budgeted for, that really is causing us a real problem, then obviously we must rule nothing out.”

As part of step four, businesses and large event organisers will be encouraged to use so-called “COVID passports” – proof of double-vaccination, negative test or recovery from coronavirus – in “high-risk” settings in order to limit the spread of infections in their venues.

Image: Social distancing rules will be removed in England on 19 July

The government will also no longer instruct people to work from home if they can, although ministers are recommending employers oversee a gradual return to workplaces for their employees this summer.

And, despite the legal requirement to wear face masks in shops and on public transport being lifted next Monday, ministers will recommend that people continue to wear face coverings in crowded areas such as on trains, trams and buses – although not venues such as nightclubs.

It comes after a strong backlash against ministers’ plans to no longer legally compel people to wear masks in certain settings.

Updated guidance for those most at risk from COVID will also be published this week, ahead of the full reopening on Monday.

England had been due to move to step four of the government’s roadmap on 21 June, but the PM last month announced a four-week delay to further unlocking due to a surge in infections of the Delta variant of coronavirus.

Mr Javid told MPs the delay had since allowed a further seven million COVID vaccinations to be given, with the government now “on track” to beat its target of offering every adult a first dose – with two-thirds of adults being given two doses – by 19 July.

Image: An NHS app can be used to demonstrate your COVID vaccination status

The government’s encouragement for large event organisers to use COVID certification – via an NHS app or an emailed test result – appears to mark a change in approach from ministers in the last week.

Mr Johnson previously said that step four would see “no COVID certificate required as a condition of entry to any venue or event”, although businesses and events could “certainly make use of certification” via an NHS app.

The health secretary also previously told MPs that the government had “concluded that we do not think using certification as a condition of entry is the way to go”.

However, the government will now encourage the use of certification for entry for large events where there are significant numbers of strangers mixing without social distancing – particularly indoors where in less well-ventilated places.

Despite the lifting of almost all remaining COVID restrictions under step four, testing, contact-tracing and rules on self-isolation will remain in place.

The requirement for double-vaccinated people, or under-18s, who are a contact of a confirmed COVID case to self-isolate for 10 days will be lifted on 16 August.

The 28-day gap between restrictions being lifted on 19 July and the easing of self-isolation rules has prompted fears that millions of Britons could be forced to self-isolate over the coming weeks.

“Instead of caution he is putting his foot down the on the accelerator while throwing the seat belt off,” Mr Ashworth told MPs.

“He admits that could mean 100,000 infections a day. That means potentially thousands suffering debilitating long COVID.

Mark Cavendish: Tour de France hero says inspiring growth in cycling ‘worth more to me than any medal’