Euro 2020: UEFA to investigate fans’ behaviour inside and around Wembley during final 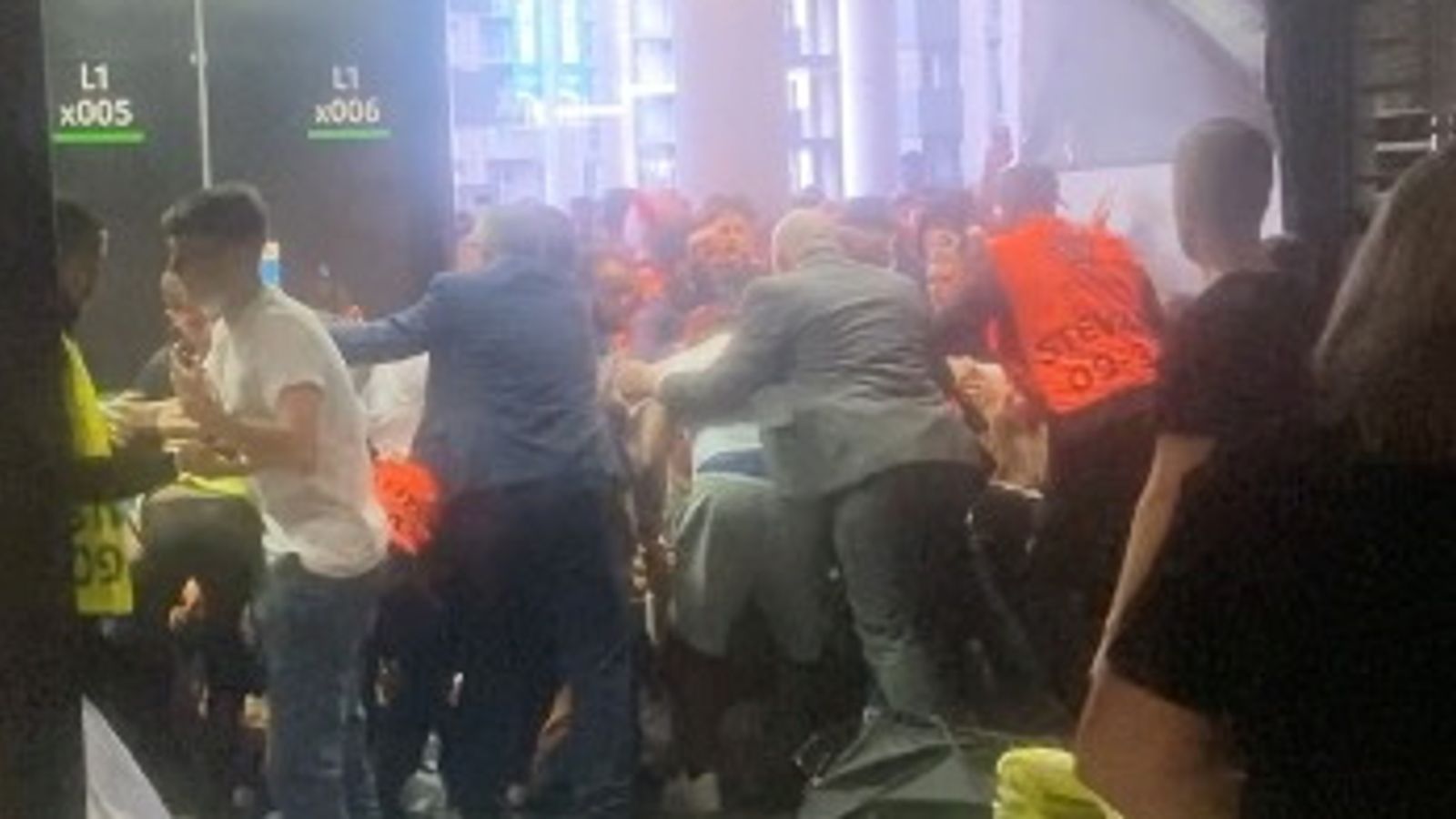 UEFA says it is launching an investigation into events involving supporters inside and around Wembley Stadium during Sunday’s Euro 2020 final.

The footballing authority has also opened disciplinary proceedings against the FA over events during England’s match against Italy.

Charges against the FA include a supporter being on the pitch during the game, objects being thrown by fans, disturbance caused by supporters during the national anthem, throwing of objects and the lighting of fireworks.

Image: Mounted police hold back the crowd after a barrier is forced over

The match was marred by disturbances outside Wembley, with some fans forcing their way into the stadium.

Individuals without tickets breached security at the stadium, and Football Association chief executive Mark Bullingham has said a full review would take place into what had happened.

The official attendance was around 67,000 of the stadium’s 90,000 capacity, with many seats intended to be left empty to distance fans due to COVID protocols.

The chaotic scenes could harm England’s proposed bid to host the 2030 World Cup.

The case will be dealt with by the UEFA Control, Ethics and Disciplinary Body in due course.

A UEFA statement said: “In accordance with Article 31(4) DR, a UEFA ethics and disciplinary inspector has been appointed to conduct a disciplinary investigation into events involving supporters which occurred inside and around the stadium.”

Anthony Glees, Professor of Intelligence and Security Studies at the University of Birmingham, said the “appalling, horrifying” chaos was down to a lack of proper security.

He said: “There was no intelligence that this was going to happen and there was a complete breakdown of security.”

Most frightening, he said “were the scenes of rampaging fans who were storming through the barriers.

“We saw pictures of yellow jackets, low-paid security guards who, one suspects had virtually no training at all, just kind of standing there and gawping whist this went on”.

For Professor Glees, the disorder evoked memories of the Hillsborough disaster, he said, and just like the 1989 tragedy, the event was “totally under-policed.

“Getting these yellow jackets to do things they are totally unqualified to do, particularly when we know the eyes of the world are upon us, that’s just awful. It’s completely unacceptable.

“It completely destroys the credibility of our [2030 World Cup] bid. People aren’t going to come to the United Kingdom if they don’t think they’re going to be safe.

“We’ve got to stop doing these things on the cheap and do them properly and keep people safe.

“Otherwise I believe we’re finished. This could be the last international tournament that we will be staging and that would be terrible, absolutely terrible.”

Italy won the match on penalties after a 1-1 draw.