Marcus Rashford: England striker thanks fans who posted messages of support on his mural 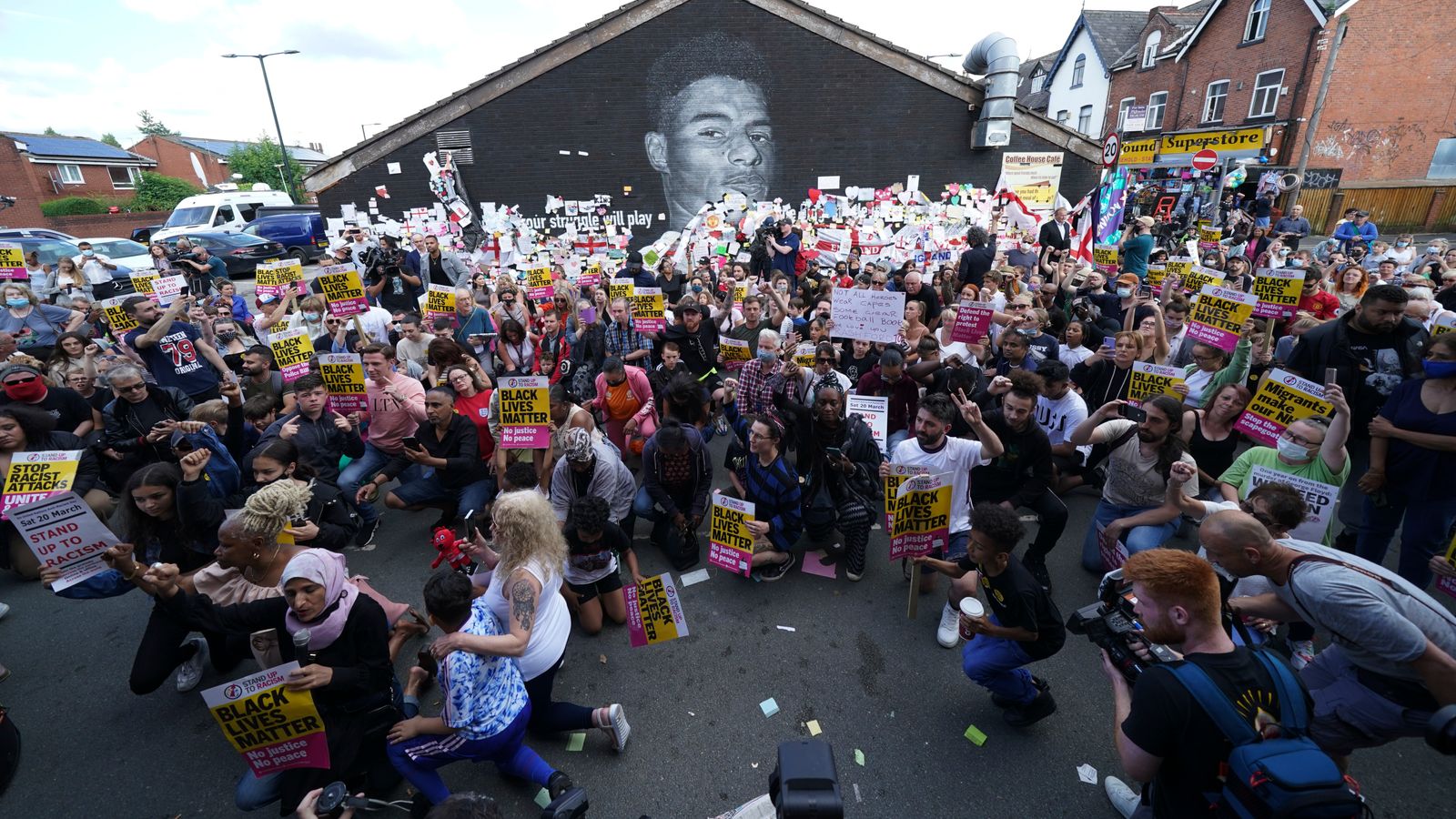 Marcus Rashford has said he is “overwhelmed” and “lost for words” as he thanked supporters who posted messages of support on a mural depicting the England striker.

The mural was vandalised in the wake of England’s Euro 2020 final defeat to Italy – but it was then repaired and hundreds of messages of solidarity were posted on it.

Scores of people at the site of the mural took the knee in protest against racial injustice and in solidarity with the player.

“Overwhelmed. Thankful. Lost for words”, Rashford tweeted, along with some pictures from the scene.

Rashford, Bukayo Saka and Jadon Sancho, who all missed in Sunday’s penalty shootout, were targeted with racist abuse on social media after the game.

The word “f***” was scrawled over the huge artwork, painted on the side of a cafe in Copson Street, Withington.

Image: ‘We stand with you Marcus’. A message of support for the England man

The words “s**t” and “b*****d” were also written beside the word “Saka”, referencing the 19-year-old whose final penalty miss gave Italy victory.

However, within hours of it being defaced, local residents had covered it with messages and hearts labelling the Manchester United star a “hero” – with another saying “Marcus for Prime Minister”.

And street artist Akse P19 has begun repainting the damaged sections of the mural that he created last November.

A crowdfunder set up to pay for repairs and keep it maintained had raised more than £27,000 by Tuesday morning.

Image: One message described the striker as an ‘inspiration’

Ed Wellard, the founder of Withington Walls, the community street art project behind the mural, said: “There’s been an outpouring of kind of love and solidarity and it’s really heartening.

“It’s a lovely thing isn’t it? I watched the footage with my friends and saw those penalties being missed and all I felt was empathy and compassion for those young men, they’ve done themselves proud, on and off the pitch.

Image: Children look at some of the messages on the Marcus Rashford mural

“I gave my 11-year-old boy a hug because he was crying and I wanted to give the players a hug.”

Another message of support posted on the wall read: “We stand with you Marcus.”

One, written on an England flag, labelled him a hero and said: “We’re proud of you Marcus. You’re a true inspiration.”

Referring to his campaign to help tackle child food poverty, another message said: “Thank you for showing us kindness and helping those in need.”

Image: ‘Thank you for showing us kindness and helping those in need’

More England flags were posted around the mural, and fans supporting a range of clubs, took to social media to condemn the racist attacks against the player.

Rashford thanked fans for their support, tweeting: “The messages I have received today have been positively overwhelming and seeing the response in Withington had me on the verge of tears.

“The communities that always wrapped their arms around me continue to hold me up. I’m Marcus Rashford, 23 years old, black man from Withington and Wythenshawe, South Manchester.

Image: The Marcus Rashford mural has been covered with messages of support

Greater Manchester Police (GMP) said they were called at 2.50am on Monday to reports of the racially aggravated damage to the mural.

Chief Superintendent Paul Savill said: “This is disgraceful behaviour and will absolutely not be tolerated.”

The mural, based on a photograph by Daniel Cheetham and painted by Akse, was created last November in collaboration with Withington Walls.

It was reportedly commissioned in recognition of Rashford’s work to tackle child food poverty.

After discovering the graffiti, Mr Wellard added: “It was horrible, I was a bit teared-up. I was upset about the result anyway and the scenes we had seen at Wembley and stuff, it felt like a dark day for English football.

“And then to come out and see what had been written, it was repugnant, it was horrible.

“I wanted it covered before the kids went to school. No one should be seeing that.

“We’ve got politicians that are trying to divide us, we need to come together.

“That team came under criticism from our government for taking the knee. So clearly at the very top we need to address that kind of attitude.”

COVID-19: Why is there a surge in winter viruses at the moment?