British Guiana 1c Magenta: £6.2m stamp arrives in UK as buyer says it was bargain but even smaller than expected 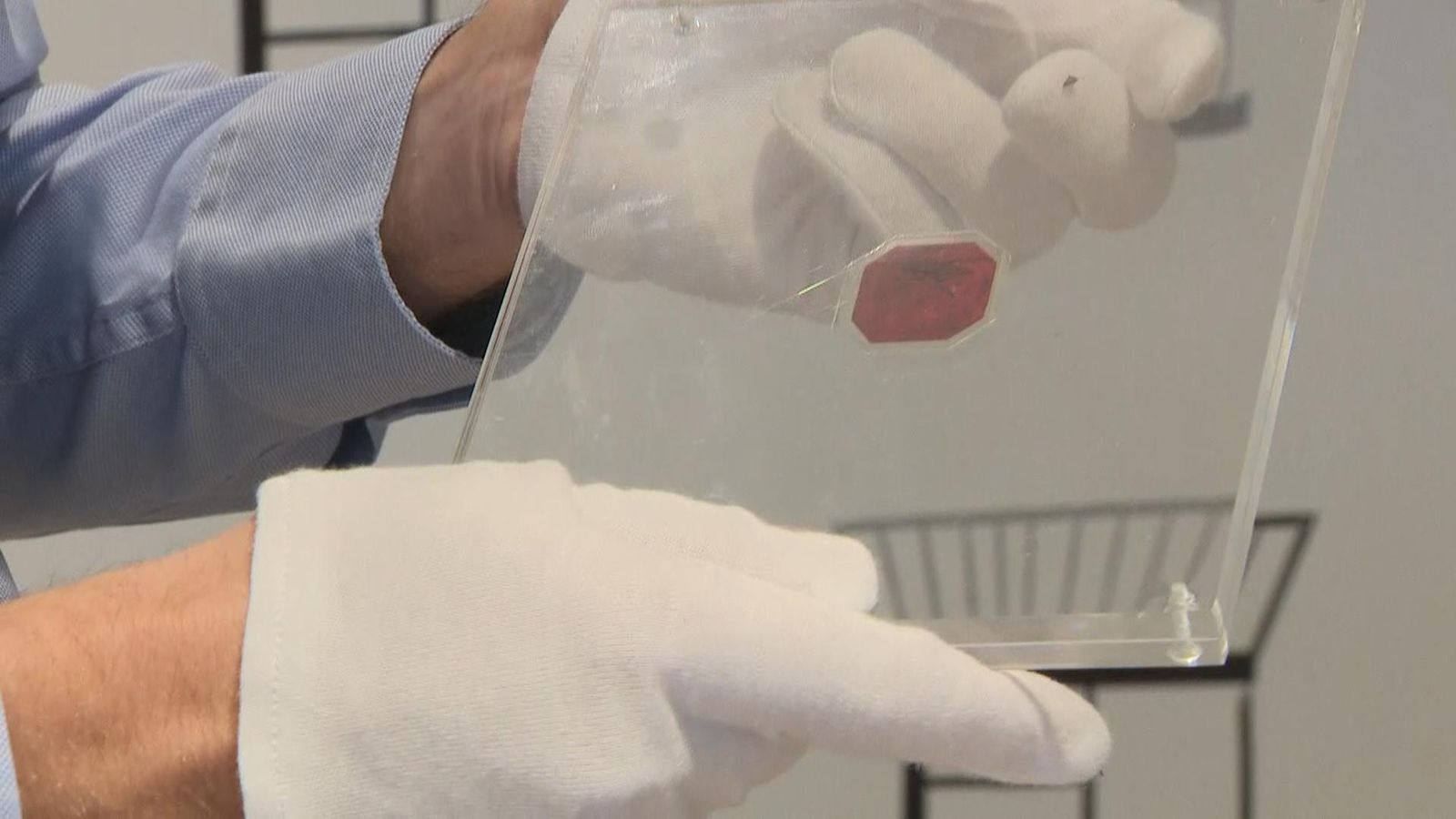 The tiny stamp – the British Guiana 1c Magenta to the cognoscenti – is, gram for gram, thought to be the most valuable man-made product ever.

The security operation to bring the world’s rarest stamp from New York to London was discreet, but necessarily tight.

As it headed through the Manhattan streets to JFK airport, its protectors carried guns.

Image: The stamp is thought to be the most valuable man-made product ever, gram for gram

On the transatlantic flight the wafer-thin, almost-weightless stamp was in a perspex frame, in a red box, in a locked briefcase, in a sealed blue bag wedged between two security guards.

Sleep and toilet breaks were taken in turns, so the precious cargo was not left alone for a second.

An armoured truck and two more guards delivered the stamp to its new owner, the dealer Stanley Gibbons in London.

“The moment of truth. I’m very excited,” said the company’s chief executive, Graham Shircore, as he lifted the box lid to gaze at the treasure.

“Wow. This is the Holy Grail for stamp collectors. There aren’t many people who get to do this.”

At 29mm x 26mm, the stamp is incredibly small and it is a marvel that it has survived at all, undamaged, over 165 years.

Mr Shircore is the man who bought it – unseen and down a telephone line during an auction in New York last month.

Image: The item was bought at a New York auction last month

His first impression? “I knew the dimensions, but it’s even smaller than I expected,” he said.

Not that he was disappointed, rather he suggested that the price of £6.2m was a bargain.

His colleague, the company’s philately managing director, Victoria Lajer, had been nervous and was now relieved the stamp had arrived safely.

Image: Graham Shircore (right) and Victoria Lajer from Stanley Gibbons are thrilled with the latest addition

“We’ve had a lot of sleepless nights, worried about the journey and getting everything in place,” she said.

“It is lovely to have it here in Britain, the home of stamp collecting. It means so much to us and philatelists are so thrilled about it. It will do a lot for the hobby.”

For the next few weeks the stamp will be locked in a vault while a special display room is created with strict controls on air, temperature and lighting… and more than hint of security.

COVID-19: UK ‘not out of the woods yet’ and pandemic ‘has got a long way to run’, Professor Chris Whitty warns