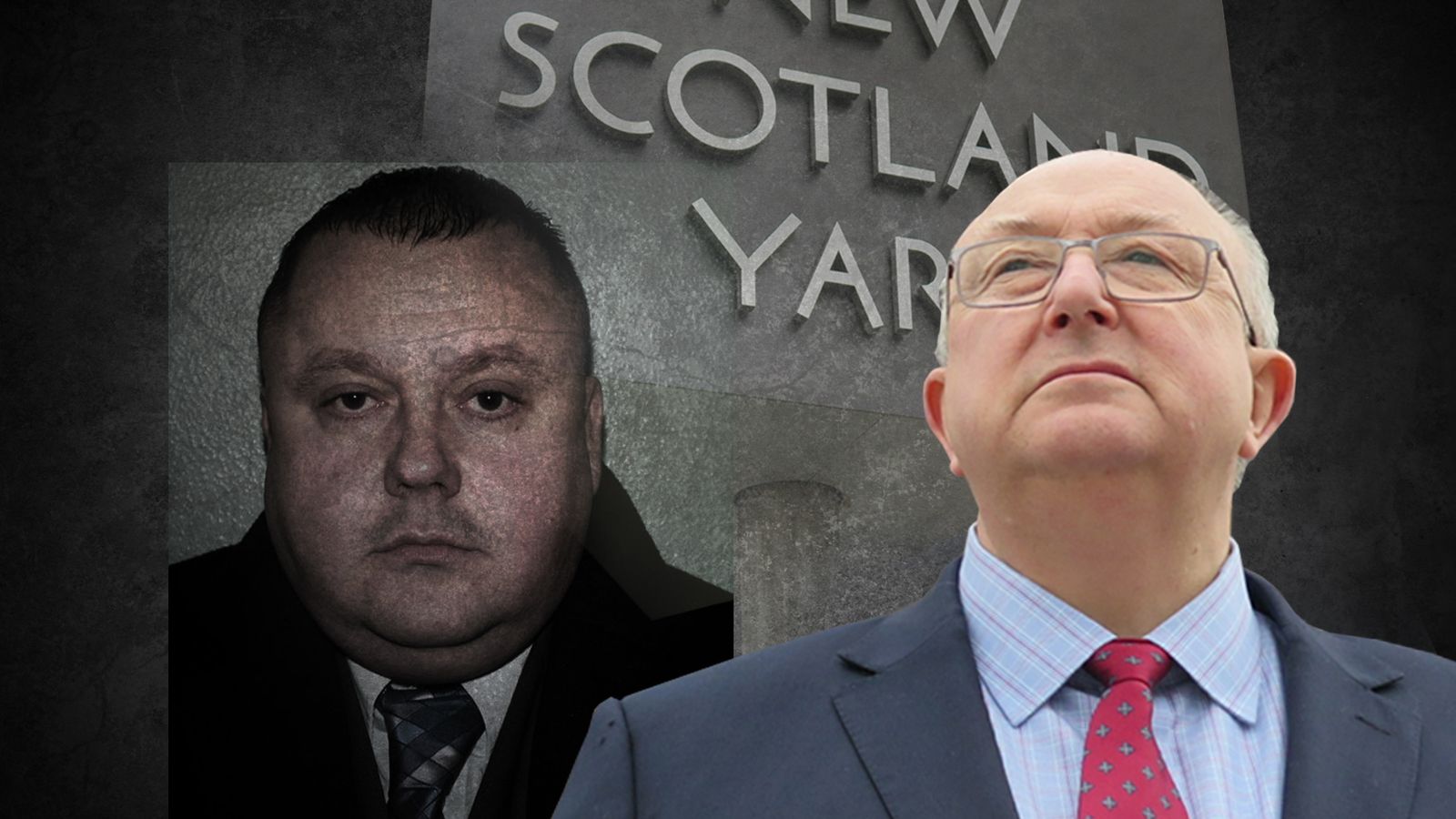 The senior Met Police officer was about to charge Levi Bellfield, one of the UK’s most notorious criminals, with murder – and the pressure to catch him had been immense.

Bellfield kidnapped and murdered 13-year-old Milly in March 2002, but it would be several years before his involvement in her death was realised.

Image: Milly Dowler was murdered by Levi Bellfield in 2002

The nightclub doorman went on to kill 19-year-old Marsha McDonnell who was beaten to death yards from her home in February 2003.

A year later, Bellfield struck again as he murdered French student Amelie Delagrange with a hammer on Twickenham Green in August 2004.

Bellfield had also tried to kill 18-year-old Kate Sheedy by running her over in May 2004, leaving her with horrific injuries including a ruptured liver and a collapsed lung.

Mr Sutton, the senior officer in charge of investigating Miss Delagrange’s murder, pieced together the evidence to catch Bellfield and ultimately connected the three killings.

He is dubbed “The Real Manhunter” in a Sky Crime documentary series which details the meticulous work that brought to justice Bellfield, who is now serving two whole life jail terms – meaning the killer will never be released.

It is during this series that Mr Sutton sheds light on the “ongoing battle” police faced with Bellfield as he tried “various tricks” with detectives while being questioned.

One of his more bizarre acts was to turn his chair around to face the wall in the interview room.

Mr Sutton, who was watching his colleagues conduct the interview in another room, says he initially smiled because he’d never encountered that behaviour from a suspect – before he quickly realised there was a “darker side” to it.

The retired detective chief inspector tells Sky News: “They were sitting there talking about the brutal murders of two young women and the attempted murder of another and he’s so disinterested that he turned his chair away.”

Bellfield’s lawyer also appeared bemused by her client’s behaviour as the killer lay back in his chair with his feet up on the wall.

“It got to the point where his feet were level with his head and that point his legal representative said to him: ‘Look, I think you ought to be a bit more respectful’,” Mr Sutton says.

“We tried to think of ways of combating it. We were actually going to try to screw the chair down.

“All we did in the end was move it towards the wall so there wasn’t room to move the chair around. We had to do things like that.”

Mr Sutton says his team realised that Bellfield became more engaged during his police interviews if he was given something to look at, such as a photograph or a map.

However Bellfield quickly cottoned on that officers were “sucking him in” so he began turning the documents over on the table so he didn’t have to look at them.

Mr Sutton says: “The next day we printed things double-sided so when he turned it over, it was the same on the other side as well and he couldn’t get rid of it.

“It’s an ongoing battle when these interviews are going on.

“He was pulling various tricks out of the bag, so we had to try to do the same as well.”

Mr Sutton – who was portrayed on screen by Martin Clunes in the ITV drama Manhunt about his work to catch Bellfield – says he “didn’t have a particularly good relationship” with the killer during their interactions.

He was first introduced to Bellfield as “the boss” by a member of his investigation team, prompting the murderer to tut and swear at him.

“I’m no psychologist but he was a narcissist,” Mr Sutton says of Bellfield, who is now called Yusuf Rahim.

“He had complete arrogance and complete self-centredness.

“He was a person who did exactly what he wanted to do.

“It didn’t matter what consequences that would have for other people, for the law… he just saw something and did it.

“I had the pleasure in the end of standing face-to-face across the desk and charging him with murder.

“To stand there across the desk in the police station and look into his eyes and accuse him of what he’d done was a very satisfying moment for me certainly.

“It was an emotional moment.”

Surrey Police said the killer admitted in 2016 to abducting, raping and murdering Milly, but he later denied making the confession.

“You can only really start to show remorse if you admit what you’ve done,” Mr Sutton says.

“He had a very strong relationship with his mother… because of that relationship, we thought he would never admit anything while she was still alive.

“She died a few years ago, but there’s been no movement on that.

“I think he’s probably got himself in a position where he’s protested his innocence for so long he realises he’d lose a lot of face if he suddenly turned around.”

Mr Sutton admits there were “certainly opportunities that were missed to intercept Bellfield earlier” but people “shouldn’t underestimate him”.

Image: Colin Sutton speaks to reporters outside the Old Bailey after Levi Bellfield was convicted in 2008

“He knew what he was doing,” the former policeman adds.

“He thought about what he was doing and thought about how he could avoid being captured and they are the most difficult murderers to catch.”

Mr Sutton said “95+ percent” of murders are “spontaneous and people committing them don’t think about their communications data or CCTV or forensic evidence”.

“It’s that little percentage – people like Bellfield – who think about what they’re doing and take steps to avoid being caught, they’re the really difficult ones,” Mr Sutton says.

• Bellfield’s known crimes are ‘tip of the iceberg’

Bellfield was found guilty of the murders of Miss McDonnell and Miss Delagrange, as well as the attempted murder of Miss Sheedy, in February 2008.

Image: Bellfield murdered Marsha McDonnell in 2003 Image: Kate Sheedy was run over by Bellfield who was convicted of her attempted murder

Immediately after the trial, he was named by Surrey Police as the prime suspect in the murder of Milly, and was convicted of killing her in July 2011.

Mr Sutton believes Bellfield committed “dozens” more crimes that he will never be prosecuted for.

“I’ve absolutely no doubt that the offences for which we know Bellfield is responsible are just the tip of the iceberg,” he says.

In recent weeks it’s been reported that Bellfield is being investigated over the murders of Lin Russell and her six-year-old daughter Megan, who were killed in a hammer attack in Kent in 1996.

Michael Stone has twice been found guilty of the killings.

Mr Sutton believes police “would want to look at (Bellfield) as a potential suspect” but one of the killer’s ex-partners – who gave evidence against him in court – has insisted she was with him on the day of the Russell murders and the pair were “nowhere near Kent”.

• Return of Manhunt – and how the ‘Night Stalker’ rapist was caught

The former senior officer is now set to be portrayed again by Clunes in a second series of Manhunt, which airs on ITV in the autumn.

The four-part series will focus on another high-profile investigation he led – this time into “Night Stalker” rapist Delroy Grant.

Grant carried out a series of sex attacks on elderly people over a 17-year-period and was jailed in 2011 for a minimum of 27 years.

Mr Sutton insists the new Manhunt series – like the first one – will focus on the police work to catch the culprit than the criminal himself.

“I don’t like focusing on the bad man,” he says.

“The whole thing I want to focus on is the victims to a degree, and also on the police officers – ordinary people doing extraordinary jobs and the way they work to keep people safe.”

Mr Sutton says Clunes has slightly altered the way he portrays him in the second series.

“If I had any tiny criticism with the first one it was that I think he was a little bit too stern because I wasn’t really like that,” Mr Sutton says.

“I promise you in the second series he’s lightened up a bit.

“It wasn’t a criticism because I think he’s a fantastic actor.

“I’ve seen the new series and I think he’s even more like me this time.”

The Real Manhunter is available to watch on demand on Sky Crime.

Mural for Saka, Sancho and Rashford defaced with racist message