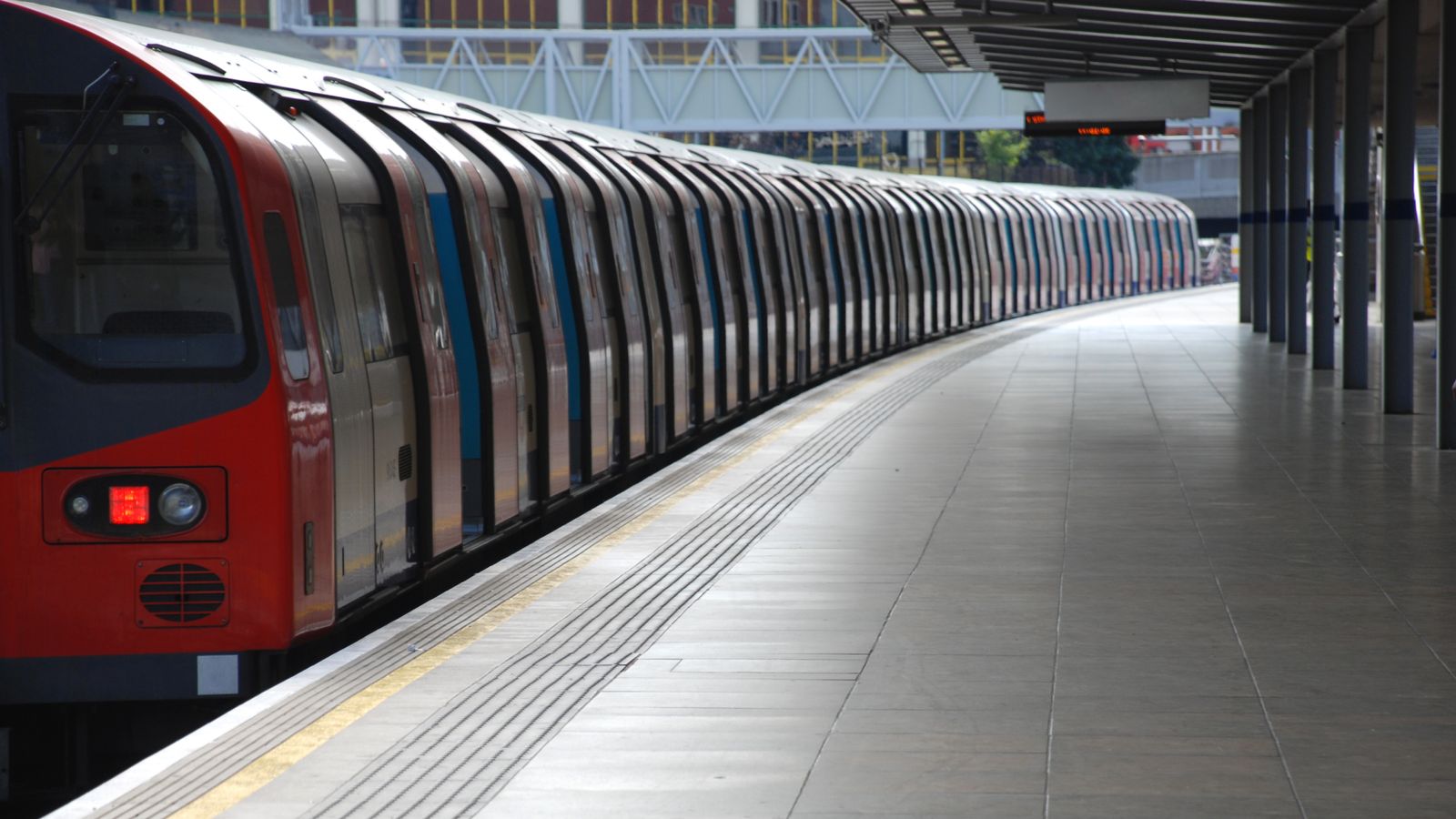 The London Underground’s Metropolitan line has been suspended and others are facing disruption after the amount of people being pinged by the NHS COVID-19 app left the service short-staffed.

The Piccadilly and District lines have also been affected by the coronavirus contact tracing app.

There are also problems beyond the capital, with bus services in East Yorkshire among those impacted by the sheer number of people being pinged after coming into contact with a COVID case.

Image: The NHS COVID-19 app has been alerting an unprecedented number of people recently

Richard Jones, London Underground’s head of network operations, said: “Due to a shortage of control room staff who are having to self-isolate following notification this morning via the Test and Trace app, there will be no service on the Metropolitan line for the rest of the day.

“This will also impact the Piccadilly line, with no service between South Harrow and Uxbridge and no service on the District line between High Street Kensington and Edgware.

“Services are expected to resume on the Piccadilly and District lines at 2100 this evening.

“We apologise to customers for the disruption. London Underground tickets will be accepted on local bus services.”

The suspension of the Metropolitan line has dealt a blow to rugby league fans, who will now have to find alternative routes to Wembley Stadium this afternoon as it hosts the Challenge Cup final – with the service being one of the main ways into the area.

The Piccadilly line serves the tourist areas of central London, including Covent Garden and Leicester Square, and Heathrow to the west, while the District line runs between west and southwest London through to Upminster.

Meanwhile, bus services in East Yorkshire are also being cancelled as a result of staff shortages.

Ben Gilligan, the area manager for East Yorkshire Buses, wrote on Twitter: “Apologies to all of our customers who are currently facing disruption. The team have worked so hard to minimise the impact of this.

“Please be considerate to those colleagues who are working today.”

Apologies to all of our customers who are currently facing disruption. The team have worked so hard to minimise the impact of this. Please be considerate to those colleagues who are working today #BeKind https://t.co/D1Y0xlTTDW

Elsewhere, trains could be altered on some Northern Rail routes this weekend due to the number of app alerts and positive tests.

Trains between Huddersfield, Sheffield and Lincoln, Sheffield and Leeds, Retford and York, and Leeds and Doncaster, are all facing cancellations in both directions, according to National Rail.

It comes amid the chaos caused by the app, with people dubbing it “pingdemic”.

Latest figures to 7 July show that 530,126 people were alerted by the app to isolate after coming into contact with someone who has tested positive for COVID-19 – the highest figure recorded to date.

Whitty warns we’re ‘not out of the woods’

Despite Transport Secretary Grant Shapps suggesting last week a tweak to the app was in the offing, Sky News understands there are no plans to reduce the sensitivity of the app in line with new social distancing guidelines.

But transport unions have warned of “dire consequences” in the coming weeks as infections rise and the number of people being told to isolate rises.

Cases are rising across the UK – more than 50,000 infections were reported yesterday and the health secretary has revealed that he is now among those isolating after testing positive.

Rail, Maritime and Transport union (RMT) general secretary Mick Lynch had previously warned that Monday, when restrictions ease in England, “will see a surge in workers pinged with a self-isolation instruction next week”.

“Even at this late stage, the government, the train operators and the bus companies should issue a clear, legally backed instruction that levels up the rest of the UK to the safety standards that will remain in force in Wales and Scotland,” he said.

With the government having decided to drop the legal requirement for masks to be worn on public transport, several operators including Transport for London have taken it upon themselves to maintain the rule.

COVID-19: Ministers wait to learn if they face quarantine after Sajid Javid tests positive for coronavirus