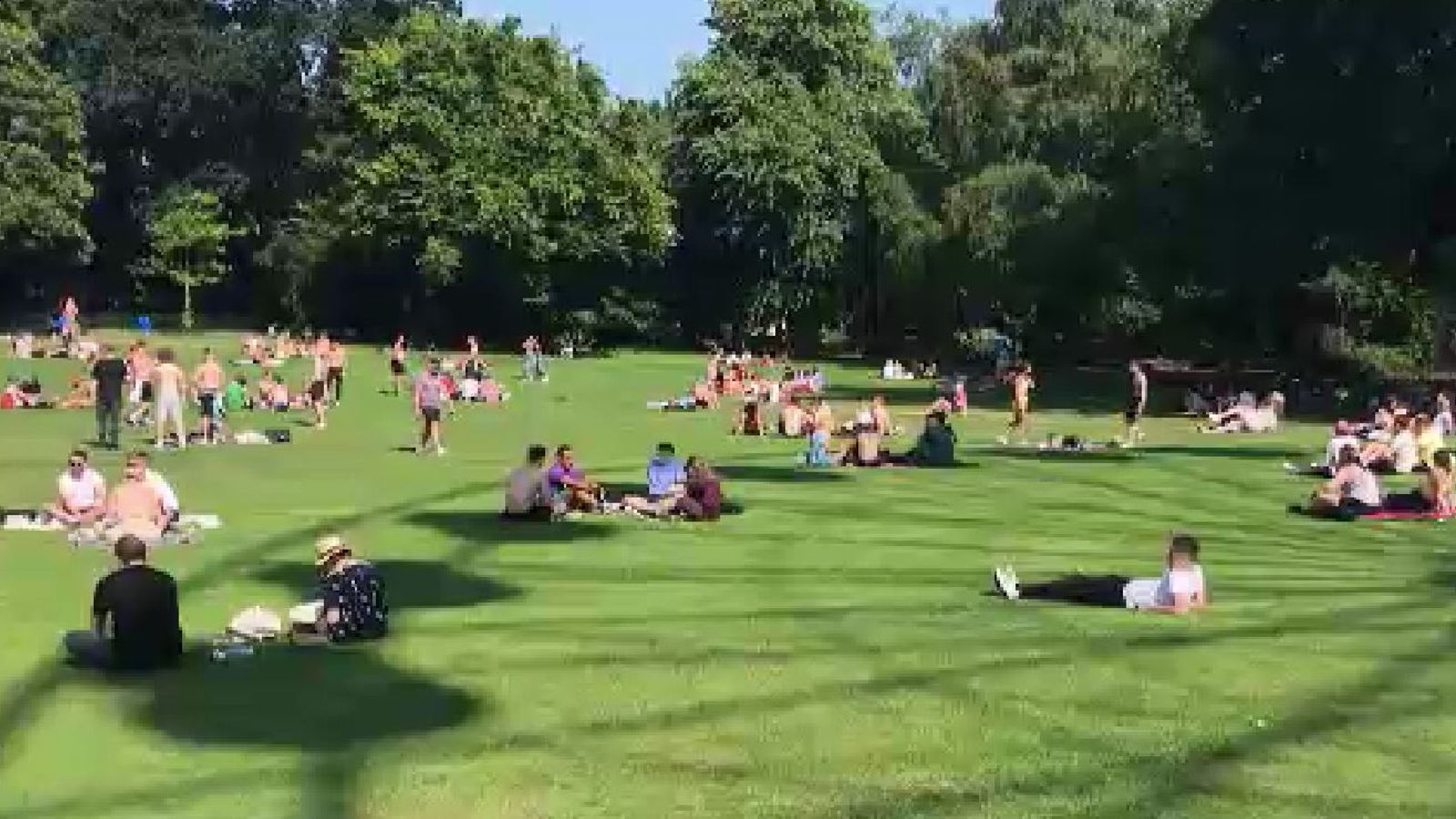 Northern Ireland has recorded what is thought to be its hottest temperature ever – with the mercury hitting 31.2C (88.1F) in County Down.

The temperature was recorded in Ballywatticock at 3.40pm, the Met Office says.

Today is provisionally the hottest day ever recorded in Northern Ireland

Crowds have hit beaches on what is provisionally the hottest day of the year in all four UK nations:

Temperatures could still rise slightly higher over the next hour or two, and the mercury is expected to rise even higher tomorrow.

Image: Plenty of people headed to The Botanic Gardens in Belfast Image: Linton-On-Ouse was the hottest part of England today

England and South Wales are forecast to see temperatures as high as 33C on Sunday, as hot air blows up from the Azores.

The increase in temperatures has seemingly prompted a surge of calls to 999, with services saying the system is “currently experiencing a higher than usual demand of callers.”

The public is being asked only to make “genuine” calls to the emergency services amid the surge.

Urgent
The weather is glorious . But with good weather comes lots of calls to emergency services. Some genuine, some not. Right now 999 services are experiencing a significant increase in calls. Please only contact 999 in a genuine emergency.

Today, Wales moved to COVID restriction level 1, meaning that rules on how many people can meet outdoors have been lifted.

However, only up to six people can meet inside homes or holiday accommodation.

Speaking from a sunny Rhyl beach in north Wales, Sky correspondent Sadiya Chowdhury said: “The beaches are not quite as packed as you might expect it to be. But it is quite filled out.

“There are groups I’ve seen of 10 or 12 people. Of course that’s perfectly allowed – as of today here in Wales because they’ve moved to COVID alert level one.”

Image: People watching the F1 at Silverstone sought out the shade

She added: “The thing that isn’t changing is masks – they will still be required to be worn indoors and on public transport.

“All these easing of restrictions bring Wales more in line with Scotland and England.

“But that’s quite surprising because Wales actually has the lowest COVID rate out of the UK, 145 cases per 100,000.

“And it also has a very successful vaccination programme – roughly 75% of the adult population have been double jabbed.”

The soaring temperatures are set to continue into Monday – England’s so-called “freedom day” from COVID restrictions.

“It’s going to mean that people are really going to feel the effects of the heat as we go through this week.”

Image: England will drop most COVID restrictions on Monday Image: A woman sunbathing on Bournemouth beach

And the RAC have warned that people should double check tyres, oil and coolant levels in the cars before heading to the beaches.

Public Health England has told people to stay hydrated, not to leave children or pets in cars, and apply sunscreen.