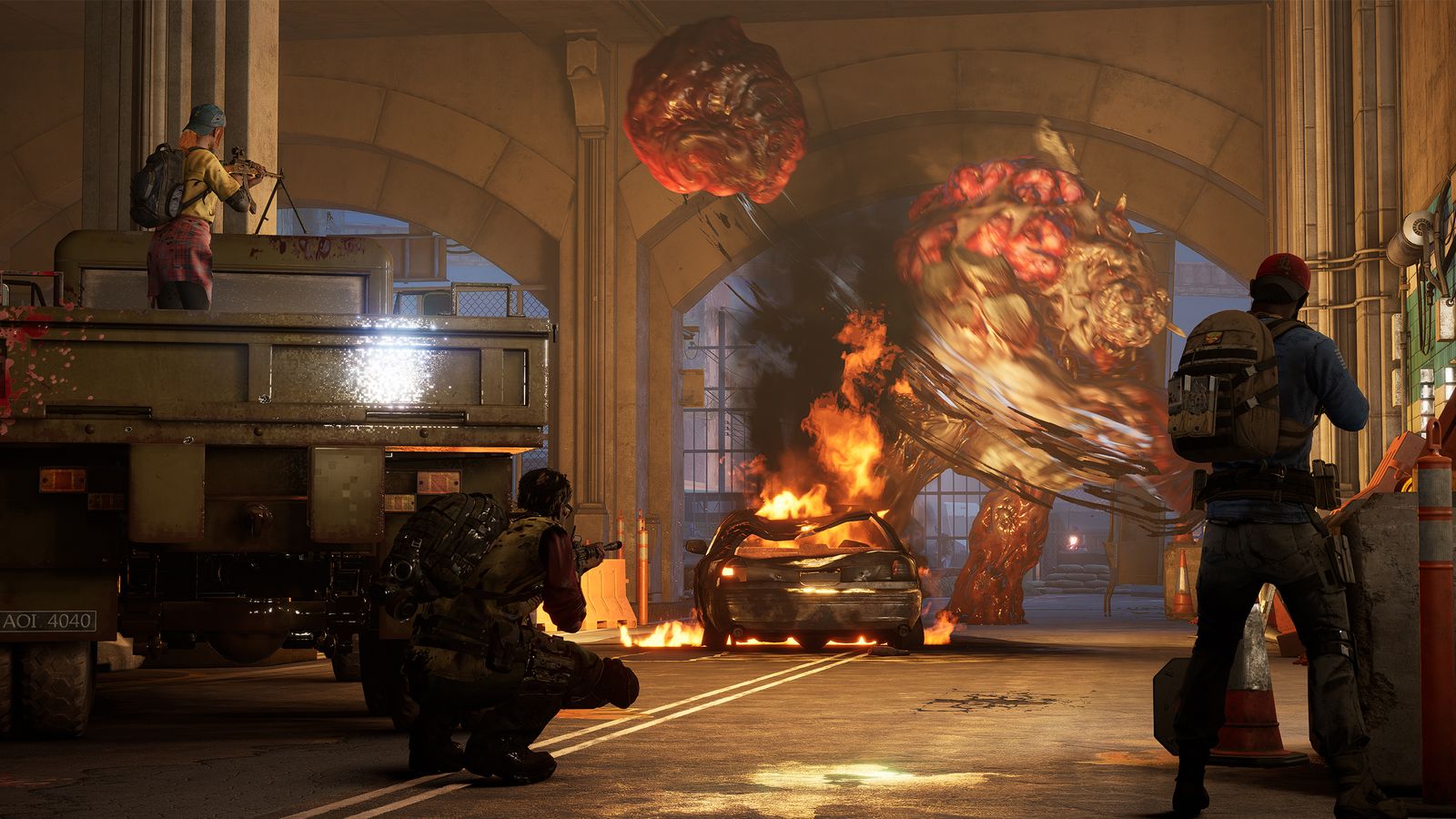 A “spiritual successor” to the genre defining Left 4 Dead games, Back 4 Blood, is slated for release in October.

Developed by the architects of the co-operative zombie shooter genre, Turtle Rock Studios have built a game wished for by fans for the last 10 years.

Described as the next-gen zombie shooting experience, Back 4 Blood (B4B) will force players to work together to survive various levels, and come up with new, collaborative ways to overcome ever-changing challenges.

Image: Players will have to battle through zombies. Pic: Turtle Rock Studios

Utilising a card-deck system to randomise enemies, environmental dangers and perks, B4B promises a different player experience every time a level is replayed.

Sky News played a sneak-preview this week, to assess progress so far.

The game follows the archetypal structure of other co-op zombie shooters, such as Left 4 Dead or World War Z.

Up to four players set off to fight their way through hordes of zombies, or Ridden, as is their name in the game’s lore, and bigger, more dangerous mutations of enemies.

Safe rooms break up the levels, allowing the player to heal, choose new weapons, and reload on ammunition.

Before the beginning of each level, the game’s computer, entitled the Game Director, will deal you a set of randomised playing cards which dictate specialist challenges on that level. For example, you may have to face larger hordes of the undead, or see a thick fog descend on your environment, limiting your visibility.

These corruption cards that hinder you, can be countered with your own card deck which you build up and improve as you play the game.

Speaking to Sky News, Turtle Rock Studio’s executive producer Lianne Papp guaranteed there would be no way to purchase these playing cards with real currency, and that any microtransactions in the game would be limited to cosmetics.

Papp also stressed that if two people with vastly different amounts of playtime play together, the lesser experienced player will still be able to make meaningful contributions with their starter deck.

The most noticeable distinction between B4B and its zombie cousins is the card mechanic, and Papp admits it’s an unlikely accompaniment to a co-op shooter: “If you’d have asked me years ago, did I think I’d be asking you ‘what deck are you going to pick today when we go into Back 4 Blood?’, I would’ve called you crazy”.

Asked whether the name and job of the Game Director AI, was based on the role of the Dungeon Master in the popular role-playing game Dungeons and Dragons, Papp said: “I think that’s a good way of looking at it, or like a puppet-master”.

When asked if there could be unforeseen trap cards which activate when players perform certain actions she confirmed: “That could happen, yes”.

On the topic of future content updates or possible battlepasses (such as the ones seen in Call of Duty: Cold War or Warzone), Papp said all energy was going towards getting the product ready for launch: “We do have an annual pass that is available for purchase that has some content drops on it, but no news other than that.”

Back 4 Blood will launch on next gen consoles, PC, PS4 and Xbox One on 12 October, and will release onto the Xbox Ultimate Game Pass on day one, meaning subscribers will be able to play at no additional cost on release day.

Given the developers’ previous involvement in the Left 4 Dead series, pressure will be mounting to repeat the success of games gone by.

Whether it proves to be the experience yearned for by thousands, for over a decade, remains to be seen closer to launch.