Free Guy: How Ryan Reynolds has created a new kind of superhero 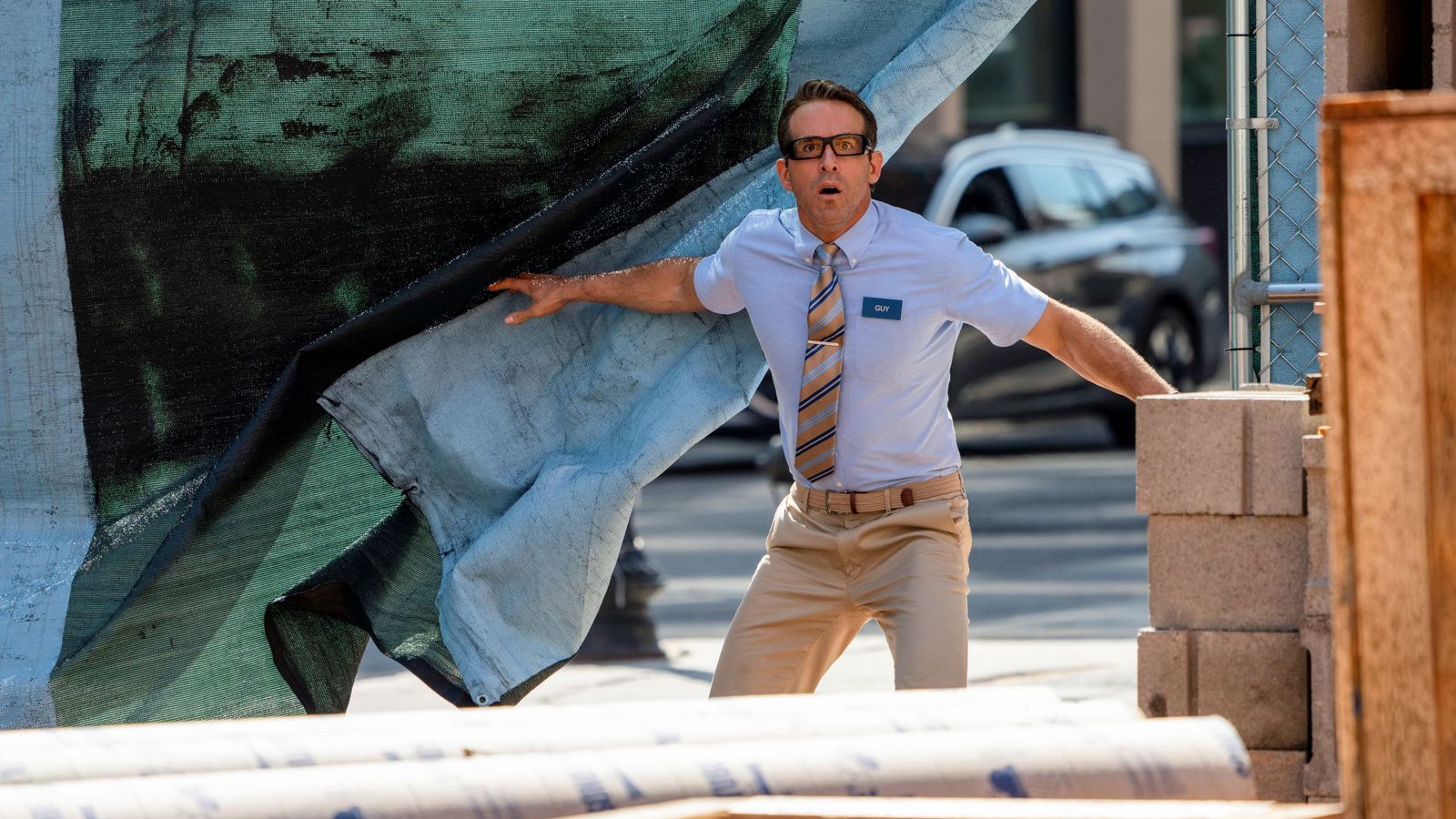 It’s a world of car chases, huge explosions and violent shootouts – so far, so typical for your average superhero.

But in Ryan Reynolds’ new film Free Guy, the Hollywood actor famous for the sweary, sarcastic Deadpool gives us a new type of crusader; an unremarkable bank worker who follows the same, simple routine every day, wears a crisp blue shirt rather than a cape, and loves Mariah Carey.

“Don’t have a good day. Have a great day,” is his cheery catchphrase. Guy is that blandest of descriptors: nice.

But the world in which he lives, Free City, is actually a fictional universe created for a computer game – and it turns out Guy is just a background character, or NPC (non-playable character), destined to live a Groundhog Day-style existence of ordinariness, indifferent to the daily death and destruction caused by gamers’ characters around him.

Until one day, he becomes more than that. Guy becomes sentient, develops opinions, and finds himself falling in love with Molotov Girl, the Free City alter-ego of gamer Millie (played by Jodie Comer) – and subsequently in a battle to take down the film’s villain Antwan (Taika Waititi), a man who has made a lot of money from stealing her intellectual property to create the game.

To the uninitiated in gaming and AI, this may sound complicated. But Free Guy manages to take what can be a tricky subject to grasp and makes it easy, fun and unexpectedly heart-warming. And despite clearly being inspired by everything from Elf to the Truman Show to Grand Theft Auto, as well as Groundhog Day, it also feels completely unique.

Reynolds may just have the feel-good blockbuster of the summer in his hands.

“The movie was never intended to be like a niche market, gamers only sort of thing,” he tells Sky News. “Like a lot of great movies that we’ve seen, you know, if you think of Back To The Future, it’s not a movie about a DeLorean, it’s a movie about time travel and about wish fulfilment and a personal adventure, and that’s sort of the feeling we wanted to go for with Free Guy.

“It’s so much less about the video game world, that’s just the setting that sort of facilitates or allows us to tell this extraordinary story.”

In the era of comic book franchises and never-ending spin-offs and sequels, Reynolds says he is also proud that Free Guy, which is directed by Shawn Levy (Stranger Things, Night At The Museum), is completely original.

“You know, that’s a harder sell for studios. So Shawn Levy and I were really excited to have that opportunity here with Free Guy.”

“She is like a skin-covered Swiss army knife,” he says. “She can just do anything, it’s really wild to see her go. I think we’d read about 70 or 80 other actors for this particular role and we knew we wanted somebody really special, but like, sometimes you don’t know what you’re looking for until it walks in the room. And that was Jodie.

“She just came in and I think it was the second line out of her mouth, I was already looking over at Shawn and just giving him the nod like, this is the person. This is our Molotov Girl.

“I think I’ve done about 800,000 more films than she has, but you wouldn’t know it. From the first hour of work on set, I felt like I was learning more from her than she was from me. And I think that’s the mark of somebody who is truly excellent at their craft. She’s also a lovely human being as well, which certainly doesn’t hurt.”

As Guy starts to make change for good in Free City, the character develops on offline fan base. The film flits between the two worlds, exploring the issue of the blurring line between reality and virtual reality.

It’s something Reynolds thought about when making the film, he says.

“AI is obviously something that we’re all contending with in reality right now, and I think our lives in screens are sometimes indistinguishable from our real lives,” he says. “I think it’s important to try to delineate the two. I can’t profess to always being successful at that.

“But, yeah, it’s pretty wild. I dove into that world pretty heavily in researching the movie… I had to really learn as much as possible and actually get into some of the games and play them, and I could see how hard it is to sort of break free and let go of them again. But also I see how much it connects people to a community.

“I was thinking a lot about gamers when we were all in lockdown and I was thinking, wow, that’s probably a really wonderful way to connect with your community around you. They have this ability to reach out and experience interaction with others through the games.”

‘I wouldn’t dare call it soccer’: Ryan Reynolds on his Wrexham FC takeover

Another world Reynolds has delved into in the past year is that of football, after his and Rob McElhenney’s surprise takeover of Wrexham FC earlier in the year.

The star describes being a co-owner of the non-league club as “the role of a lifetime” – and assures British fans he definitely won’t be calling it soccer during our interview.

A special screening of Free Guy was held in the Welsh town earlier this week, ahead of official release, with many seats going to emergency service workers and charities as a thank you for everything they have done during the pandemic.

It seems especially fitting as one of the other themes of the film is celebrating the ordinary, the unsung heroes who don’t always get the spotlight they deserve. Following 18 months of key workers getting the world through the crisis, it’s a subject that resonates in 2021.

“The reason we made this movie was exactly that,” says Reynolds. “When we were filming, this was on the forefront of all of our minds. It was a time when we were in this constantly dark and frightening news cycle and you were seeing people come out of the shadows and people stepping forward from the background, uniting and becoming agents of change.

“I think that that’s what you’re seeing in Free Guy as well, a fictionalised version of that and a much more fantastical version, and it’s set in a giant action adventure/comedy/romance setting.

“But, yeah, that was a huge part of our intention going into this, and as the time marched forward it only became more and more relevant to right now.”

Free Guy is out in cinemas now