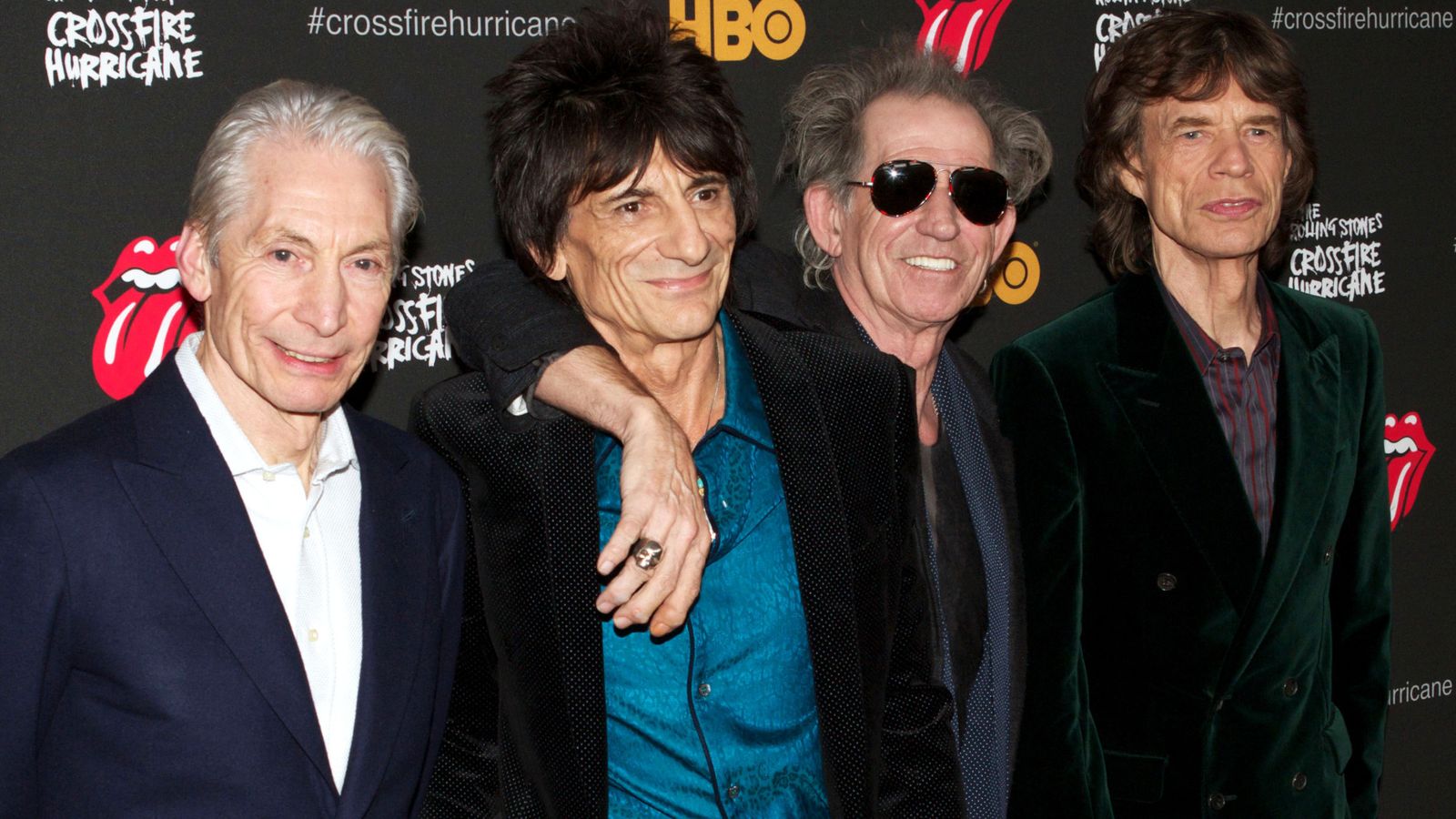 Watts had been the beating heart of the band since 1963 and played on legendary rock hits including I Can’t Get No Satisfaction, Paint It Black and Brown Sugar.

He died “peacefully” at a London hospital on Monday surrounded by his family.

Sir Mick, 78, paid a wordless tribute to his bandmate of almost 60 years on social media – sharing a picture of Watts smiling while seated behind a drum kit.

His bandmate, guitarist Keith Richards, 77, followed suit by sharing a picture of a drum set with a “closed” sign on it, also without a caption.

Watts had been replaced on the band’s upcoming US tour by American musician Steve Jordan after undergoing a medical procedure.

The world of rock was quick to show an outpouring of appreciation for Watts, with Sir Paul McCartney describing him as a “fantastic drummer, steady as a rock”.

The Beatles star said in a video message: “So sad to hear about Charlie Watts, Stones drummer, dying. He was a lovely guy.

“I knew he was ill, but I didn’t know he was this ill, so lots of love to his family, his wife and kids and his extended family, and condolences to the Stones, it’ll be a huge blow to them because Charlie was a rock, and a fantastic drummer, steady as a rock.

“Love you Charlie, I’ve always loved you, beautiful man, and great condolences and sympathies to his family.”

Meanwhile, Sir Elton John described Watts as “the most stylish of men”.

Johnny Marr, guitarist and former member of The Smiths, tweeted: “Aside from being a unique musician Charlie Watts managed to remain completely classy throughout the whole of the Rolling Stones career. Quite an achievement.”

A very sad day. Charlie Watts was the ultimate drummer. The most stylish of men, and such brilliant company. My deepest condolences to Shirley, Seraphina and Charlotte. And of course, The Rolling Stones.

Aside from being a unique musician Charlie Watts managed to remain completely classy throughout the whole of the Rolling Stones career. Quite an achievement. #charliewatts

Rocker Alice Cooper said the music world had lost “one of rock and roll’s true gentlemen”.

He added: “Charlie Watts kept the beat for the world’s greatest rock band for over 50 years. I consider him the greatest pocket drummer of all time.”

Roger Daltrey, The Who’s frontman, recalled Watts as being “the perfect gentleman, as sharp in his manner of dress as he was on the drums”.

In a statement, he added: “Charlie was a truly great drummer, whose musical knowledge of drumming technique, from jazz to the blues, was, I’m sure, the heartbeat that made The Rolling Stones the best rock and roll band in the world.”

Singer Bryan Adams wrote: “RIP Charlie Watts, one of the greatest rock drummers ever and a real gentleman.

“Condolences to his family and the band.”

Duran Duran said they were “so saddened” to hear about Watts’ death, adding he was “an absolute inspiration to a legion of drummers since the 1960’s. A man of grace, style, dignity and composure”.

So saddened to hear about the passing of Charlie Watts . An absolute inspiration to a legion of drummers since the 1960’s. A man of grace , style , dignity and composure . pic.twitter.com/Nu4msDShAF

Iconic singer and guitarist Nile Rodgers also paid tribute to the drummer, writing: “Rest In Power #CharlieWatts RIP. You are a smooth brother. Thanks for all the great music.”

In 2004 Watts was treated for throat cancer, and was later given the all-clear after six weeks of radiotherapy.

Image: Charlie Watts (C) with The Rolling Stones in 1964

Having given up smoking in the 1980s, the drummer said he was lucky the doctors caught the cancer early.

He grew up in Wembley, north London, and met Sir Mick as a teenager.

Despite being the quiet, well-dressed band member, he dealt with drug troubles in the 70s and 80s, and ironically, Keith Richards was one of the people who helped him kick his heroin habit.

Image: The drummer, pictured in 1968, has been described as ‘one of rock and roll’s true gentlemen’

Richards – arguably one of the most avid drug users in music history – staged an intervention after witnessing Watts pass out during a recording session.

Watts recalled the moment in a BBC 6 Music interview years later, saying: “I was lucky that I never got that hooked, but I went through a period of taking heroin.

“I fell asleep on the floor during [the recording of] ‘Some Girls’ and Keith woke me up and said: ‘You should do this when you’re older’. Keith telling me this! But it stuck and I just stopped along with everything else”.