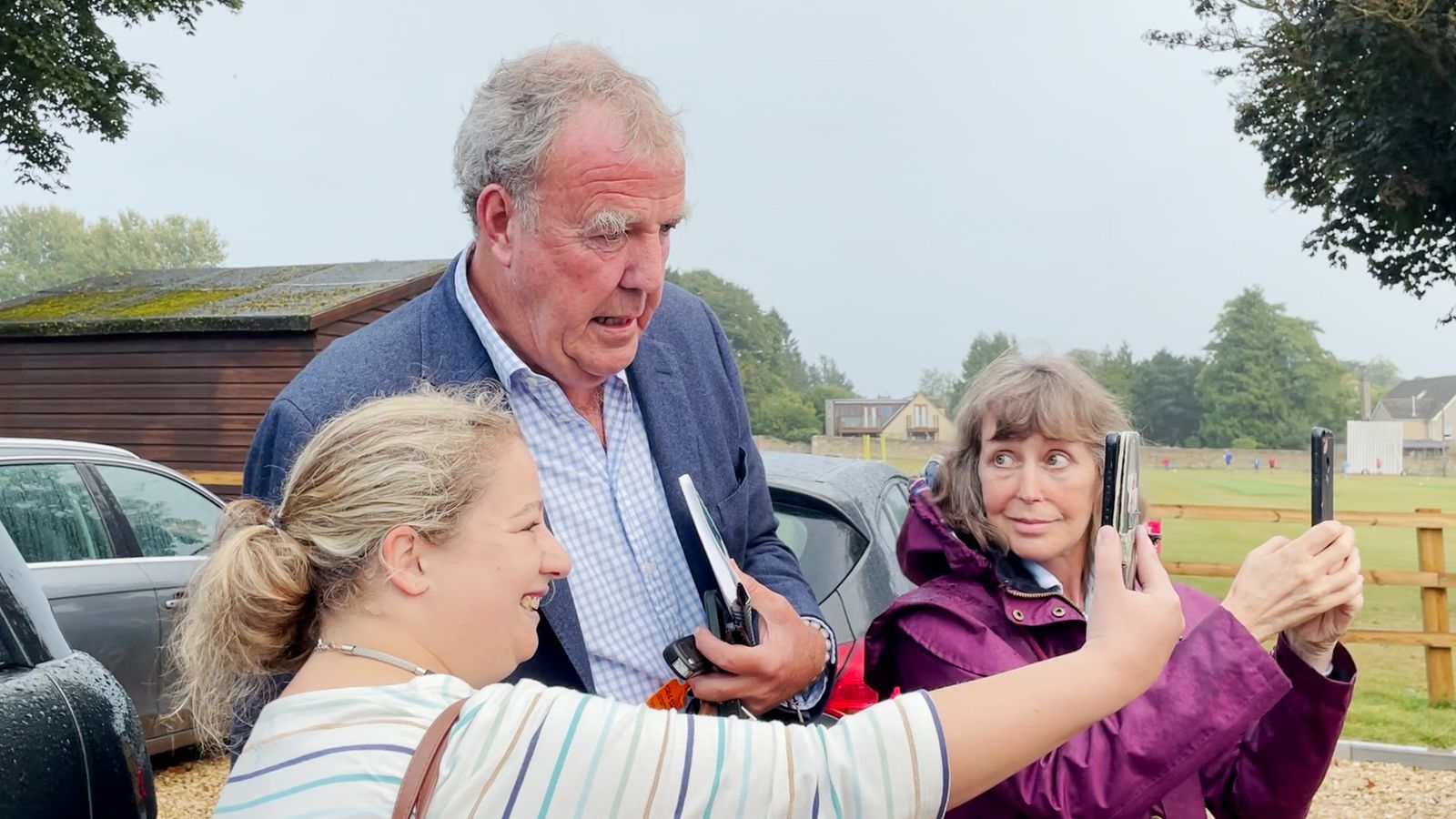 Jeremy Clarkson has held a meeting with Oxfordshire villagers amid concern about the traffic created by his Diddly Squat farm shop, featured in the Clarkson’s Farm TV show.

As he arrived at the Memorial Hall in Chadlington, there was an early sign of potential controversy to come.

“Someone gave me the finger on the way in,” the presenter of the hugely popular series told reporters.

Clarkson, 61, said he had called the meeting to stop “gossip” from spreading.

“I’m just here to listen,” he said. “Gossip spreads in villages and they don’t know what we’re doing so I thought, the best thing I can do is come down and say: ‘This is what we’re doing,’ and then it isn’t gossip any more.”

Someone who recently drove past the shop, on a Tuesday, told Sky News there were large queues on the road outside.

Shoppers have travelled from across the country and queued for hours to buy things including candles, milk and cheese.

Asked about the traffic, Clarkson said: “Hey, listen, the village has created a bit of a traffic jam tonight.”

Residents, speaking after the meeting, said he was planning to convert his lambing shed into a restaurant.

He apparently said it would be “cheaper” than other eateries nearby, charging about £60 for a meal for two.

Image: Clarkson had a meeting with local residents

He also reportedly said he was hoping to curb the number of daily visitors to the farm shop.

Jonathan Moore, 53, a doctor who lives nearby and was at the meeting, said Clarkson is “hoping to change the lambing shed into a restaurant”.

He added: “We thought it would be for 150 (people) but it’s actually 60 seats, and he’s trying to control the number of people coming to the farm shop in the future.

“As expected there were some people who had very strong views either way; the people who had negative views made them more strongly. He gave his views for the future and that’s all we can really hope for.”

Mr Moore said he was “sympathetic”, adding: “I don’t want to stifle success.”

Another resident, Maggie Jackman, said Clarkson was “very entertaining” and “a lot of people were completely won over”.

Villagers had come up with “some very sensible ideas”, she added.

“I’m waiting to see if he puts words into action,” she said. “Actions speak louder than words, so let’s see how it goes.”

Another resident said: “There were two or three local people who were very negative but I got the feeling that the majority was open to this project.”

Clarkson declined to comment as he left, as did the chairwoman of Chadlington Parish Council, Zoe Townsend.

Prior to the meeting, posters were put up, reading: “As there seems to be some debate in the village about what’s going on at Diddly Squat, Jeremy Clarkson will be at the Memorial Hall to explain his plans and to take any questions you may have.

“Everybody from the area is welcome to attend. Cheese and wine will be provided.”

Clarkson’s Farm, made for Amazon Prime Video, has attracted glowing reviews from people who did not warm to the presenter’s petrol-head persona while presenting Top Gear and The Grand Tour.

An article in The Guardian said that while working his land, Clarkson is “quieter and more thoughtful than the man we had grown familiar with”.

When he bought the farm in 2008 it was run by a villager, who retired in 2019, prompting Clarkson to have a go himself.

A second series of the television show is currently in production.