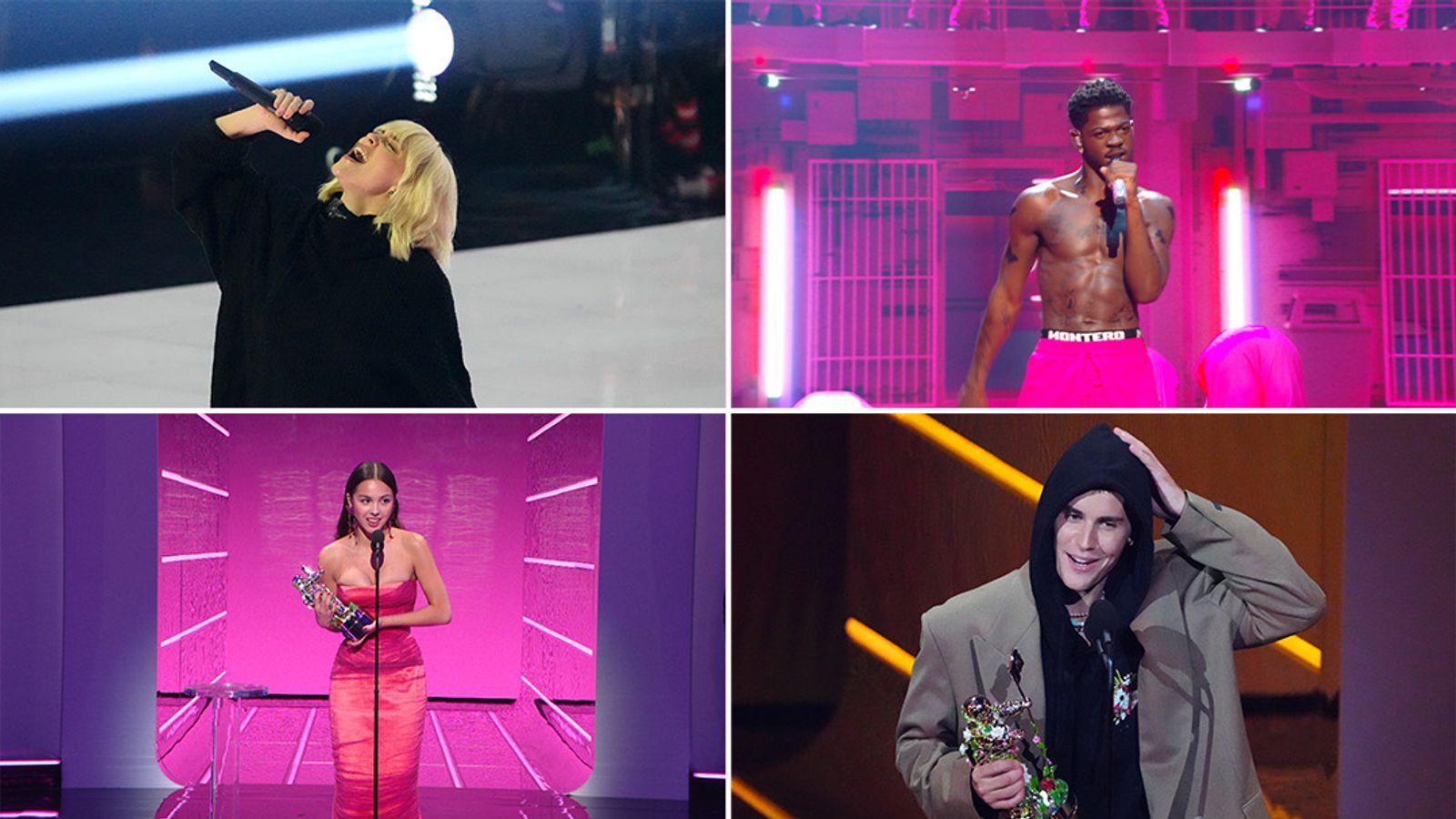 Justin Bieber, Olivia Rodrigo and Lil Nas X walked off with the top awards at this year’s in-person MTV Music Video Awards in New York, on the channel’s 40th anniversary.

The world famous Moonman trophies were handed out at the Barclay’s Centre late on Sunday evening, after organisers were unable to hold the event in-person last year, due to the pandemic.

Taking the main prize, video of the year, was Lil Nas X, who has faced fierce criticism from conservative and religious groups in recent months for his sexually explicit videos and selling shoes containing his own blood.

Accepting the award for his song Montero (Call Me By Your Name), a video in which he pole dances and twerks in front of the devil, Lil Nas X gave a tongue-in-cheek thank you to the “gay agenda”.

He also used his performance of the track, as well as latest single Industry Baby, to highlight the plight of people living with HIV in the south of the US.

He also performed with The Kid Laroi on their viral track Stay, which has raced up charts around the world.

In his acceptance speech, the Canadian said that “we are in unprecedented times” due to the pandemic.

He added: “Music is such an amazing opportunity and an amazing outlet to be able to reach people and to be able to bring us all together and that’s why we’re here right now. We’ve got a lot more in common than we don’t.”

Image: Olivia Rodrigo was one of the show’s big winners. Pic: Charles Sykes/Invision/AP

Teen sensation Olivia Rodrigo picked up the gongs for song of the year for Drivers License and best new artist at the glitzy ceremony, and also performed her track Good 4 U.

A Disney Channel actress, her album Sour topped the charts in the US and UK, and has been one of the biggest selling records of the year.

Accepting her song of the year trophy, the 18-year-old said: “This has been the most magical year of my life and it’s all because of you.

“I want to dedicate this award to all the other girls who write songs on their bedroom floor.

“There are a lot of people who will try to dim your light but speaking your mind and sharing your heart are the most beautiful things in the world and here’s to that.”

Fellow teen star Billie Eilish won the fan-voted video for good award for track Your Power, about a man that abuses his position over a young woman.

She told the room that “we need to protect our young women at all costs, for real” during her speech.

Meanwhile, Foo Fighters performed a medley of their hits on the stage before picking up the inaugural global icons award, while stars Doja Cat and SZA won best collaboration for their track Kiss Me More.

BTS were also in the mix, accepting the best K-pop award for their latest track Butter.

Cyndi Lauper had the evening’s political moment when she took aim at the newly introduced Texas law that bans most abortions in the state.

While presenting an award, she said that while girls also want to have fun, they also want “control over our bodies… you know, fundamental rights”, to rapturous applause from the room.

Also performing at the ceremony was Alicia Keys, who delivered a tribute to New York City – the same weekend as the 20th anniversary of the September 11th attacks, singing her mega-track Empire State Of Mind.