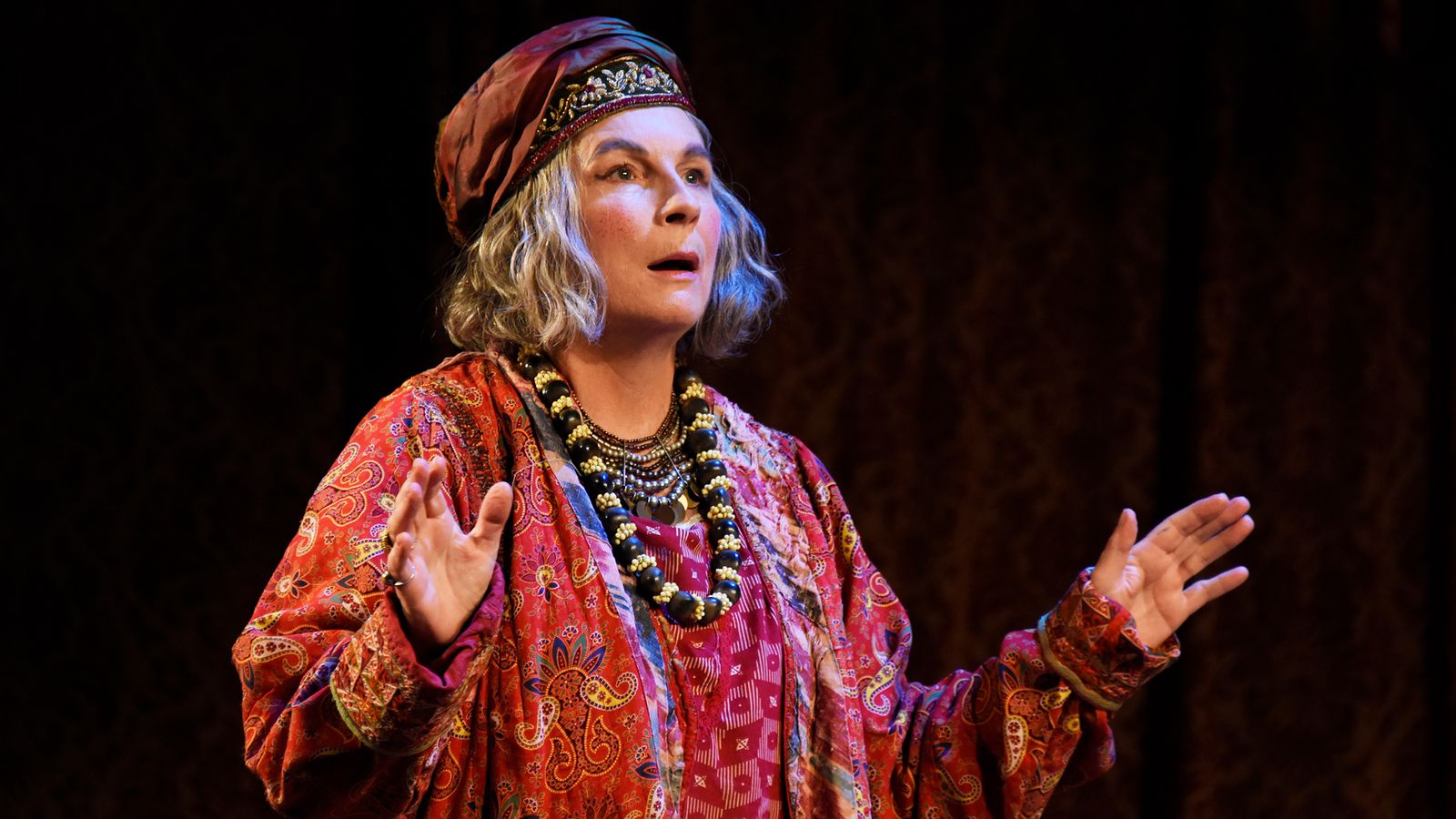 Not even Noel Coward’s eccentric clairvoyant Madame Arcati could have predicted theatres would be left dark for 18 months by the pandemic – but as Jennifer Saunders returns to the stage in Blithe Spirit, she says her prediction has to be that we can get the show back on the road.

Saunders told Sky News that as far as she’s concerned, the show must go on, and it now comes down to personal choice.

“It’s more dangerous for those people that aren’t vaccinated,” she said. “If someone’s not vaccinated, that’s their decision – I’m double vaccinated, I wear a mask and I wash my hands as often as possible and I get tested regularly, as I imagine a lot of people do. Most people do. So the risk is on the unvaccinated, not us, really.”

Image: Saunders says the role of Madame Arcati is a ‘joy’ to play. Pic: Nobby Clark

After productions such as this latest take on Coward’s play were forced to close in March 2020, theatre land has had its fair share of false restarts, with shows such as Six and Andrew Lloyd Webber’s new Cinderella opening only to shut down again due to COVID-19 and the so called “pingdemic” taking out casts.

But like many of her peers, Saunders – much loved for Absolutely Fabulous and French and Saunders, for which she won a BAFTA fellowship in 2009 – says reviving the theatre industry should be the focus, even though you can’t eliminate risk entirely.

“We have to look at each other and when you project, you do… you know, air and spittle comes out and all the rest of it,” she said. “But as a cast, we are a bubble and we’re constantly tested, so it does feel very safe and enjoyable.”

Her optimism for the future of the industry is encouraged by a world readjusting.

“I think it will come back – people are going to tennis matches and football matches and everything else and going out into clubs and to restaurants and the theatre is no different to that. People just need to get back into the habit.”

Having eyed up this role since she saw Margaret Rutherford in the film adaptation of Blithe Spirit, Saunders says despite being written in 1941, the play – about a couple haunted by his ex-wife – endures because of the way it is written.

“Coward’s genius at writing dialogue – I mean, it just fizzes – and a married couple arguing is as relevant now as it ever was, and it’s the same arguments,” she said. “And he’s so witty and he’s so sharp, and that’s why it’s also a joy to play because there really isn’t a duff line.”

Image: Saunders says Absolutely Fabulous, which also starred Joanna Lumley, would not be made today as comedy has moved on ‘as the modern world should’

But while Coward’s material remains relevant, Saunders recently hit headlines for saying her own show Absolutely Fabulous would not be made now.

The star accepts that when she burst on to the scene, her generation clashed with the old.

“I said it wouldn’t probably be made now because sensibilities are different, which they are, and quite rightly so,” she said. “Every generation brings with it its own view of the world and its own sensibilities and certain sensitivities – as we did when we started as alternative comedians and we were seen as being against the old comedy.

“But to be honest, it just moves along and it moves along as the modern world should, and quite rightly so. We all adapt and we all move forward, you adapt and you can still be funny; it’s a modern way of thinking, a different world, different sensibilities, we’re probably kinder, you know.”

Now she’s back on stage, Saunders says she just hopes everyone else comes back, too.

“I just hope people come to the theatre and I hope when they come that they keep themselves safe and they keep other people safe, you know, and the theatres are doing everything possible to facilitate that.

“It’s not just in the theatre, which was hit incredibly badly, but all the businesses around – all the cafes and the restaurants and everything that facilitates theatre has been hit so badly. So the sooner we can get everything up and up and running safely, the better for everyone in the West End and around the country.”