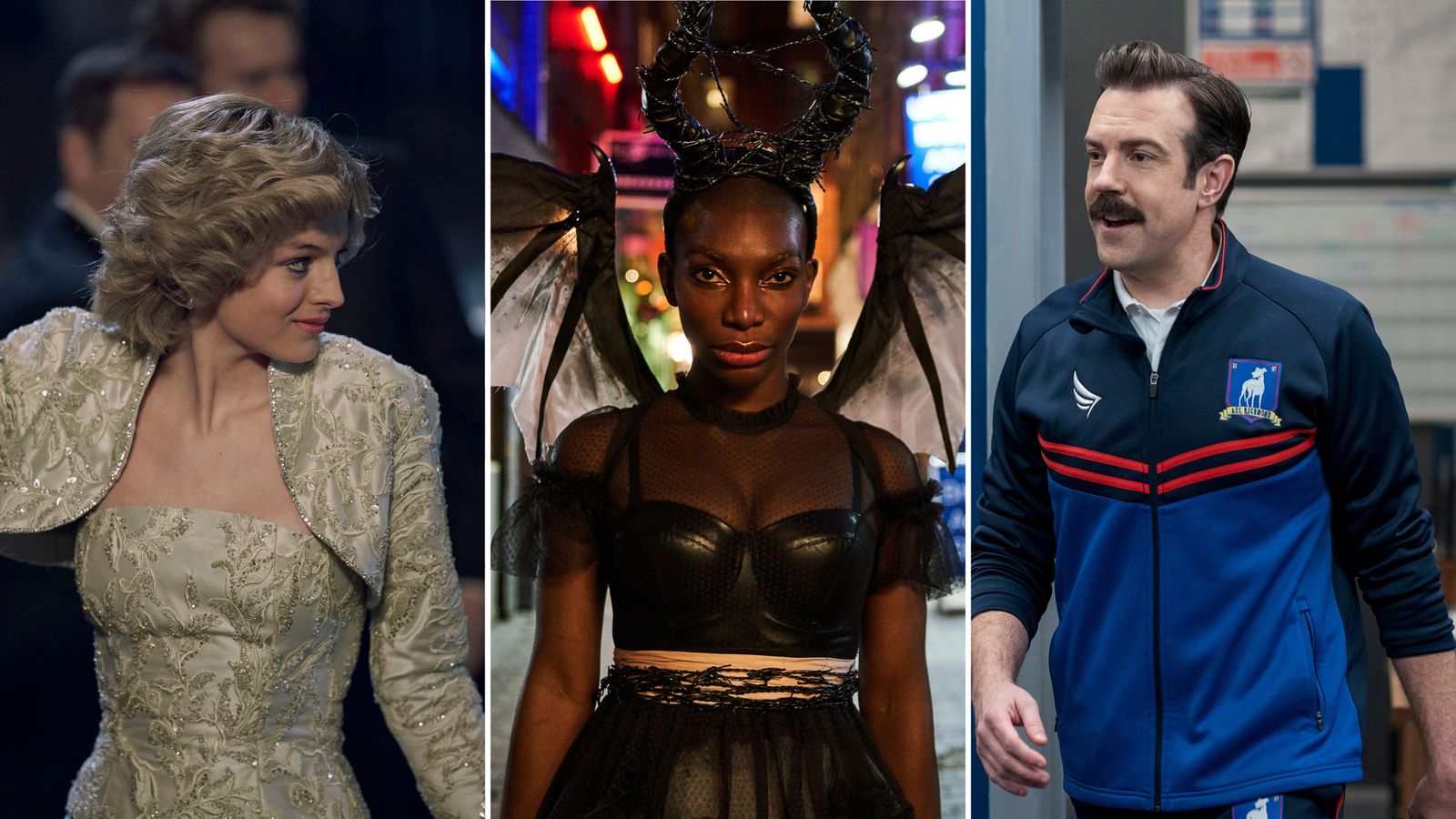 The biggest awards show in television is just around the corner, with networks and streaming services clamouring for their programmes to be crowned the best in their categories.

British talent and productions are firmly in the running this year, with shows such as Netflix smash The Crown, Michaela Coel’s powerful drama I May Destroy You and Apple TV+’s runaway success Ted Lasso all set to battle it out at Sunday’s ceremony.

Bagging itself more than 20 nominations across the main and creative awards, The Crown looks set to continue its dominance at the flagship ceremony – with stars Olivia Colman and Emma Corrin up for best actress in a drama, and Josh O’Connor up for best actor.

Image: Olivia Colman has played the Queen in The Crown for the last two series. Pic: Sophie Mutevelian/ Netflix

Emerald Fennell, Helena Bonham-Carter and Gillian Anderson are also nominated in the supporting actress category for their appearances in the royal drama, while Tobias Menzies is in the running for best supporting actor, and Claire Foy and Charles Dance have been recognised for their guest roles.

I May Destroy You, Michaela Coel’s hard-hitting drama based on her own experiences of sexual assault, is also among the British shows up for a number of awards – including best limited series, best actress in a limited series and recognition for its writing and directing.

And it doesn’t stop there for British talent, with raunchy Netflix period drama Bridgerton also featuring in a number of categories, including for the coveted best drama trophy, while star Rege-Jean Page is up for best drama actor.

Kate Winslet has a good chance of bagging a win for her critically acclaimed performance in the Sky Original Mare Of Easttown (alongside co-star Evan Peters) – she goes up against fellow British stars Coel, Cynthia Erivo and Anya Taylor-Joy.

Ewan McGregor is in a tough category for his part in fashion drama Halston, up against Hamilton actors for the lead actor in a miniseries or movie award. That same category also includes British stars Paul Bettany, who gets a nod for his role as Vision in Marvel’s WandaVision, and Hugh Grant, for The Undoing.

And it isn’t just British talent that could make history, with MJ Rodriguez tipped to the be the first trans woman to score a win in the best actress in an anthology category.

Rodriguez stars in the ground-breaking LGBTQ+ drama Pose (also up for awards), which follows the black and Latinx LGBTQ+ community in 1980s New York.

The Mandalorian, Disney’s bounty hunter Star Wars spin-off, is joint with The Crown for the total number of nominations at 24. These include the award for outstanding drama series, while stars Carl Weathers, Timothy Olyphant and Giancarlo Esposito are all recognised in various categories – as well as the some of the creative categories.

The Emmys take place on Sunday evening in the US, overnight in the UK – you can get up to date with the winners and best bits early on Monday on Sky News.