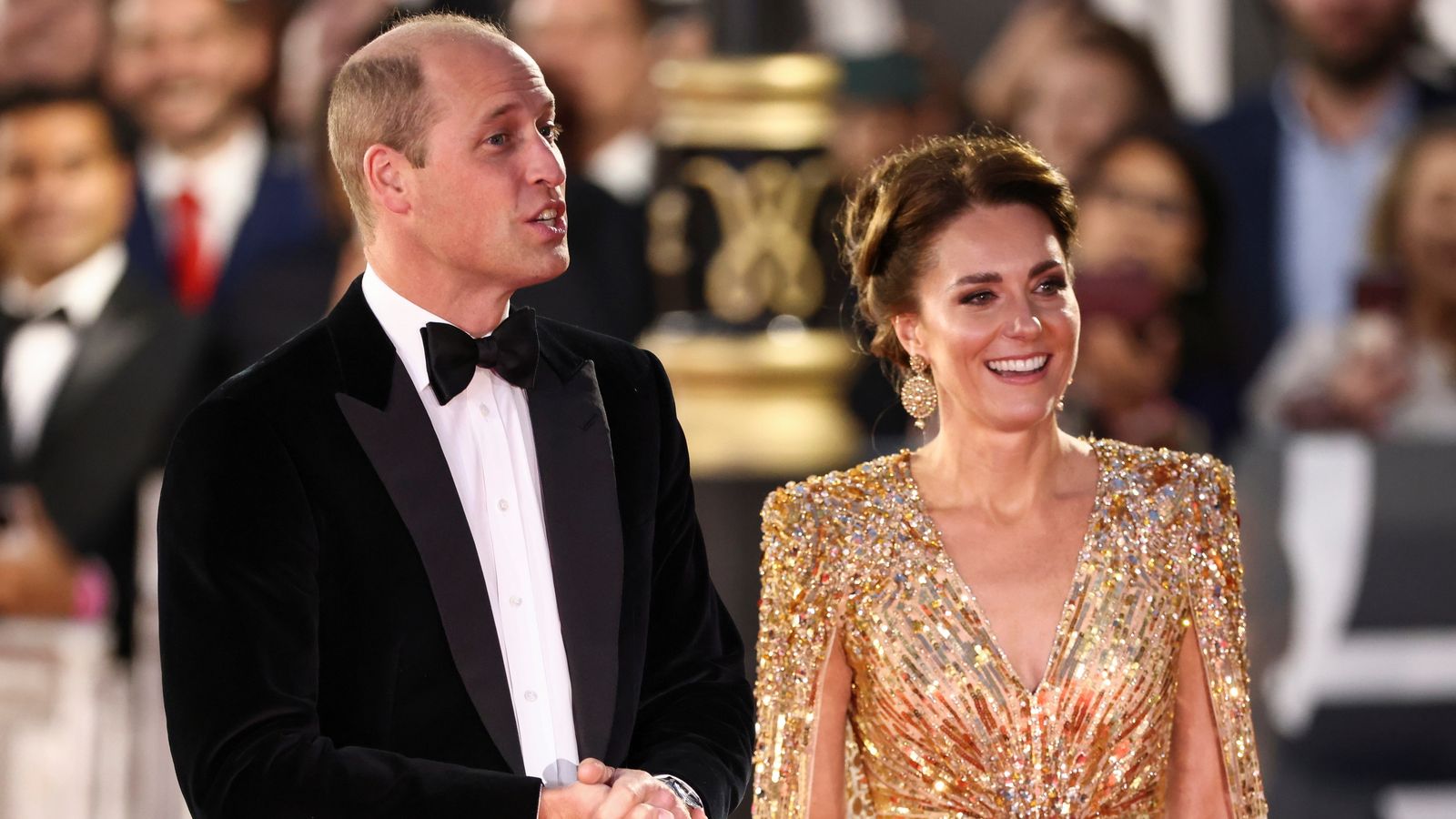 Craig told Sky News he is “greatly relieved” that the new 007 film, No Time To Die, is finally going to be shown in cinemas.

At the world premiere in London, the Bond star said: “We’ve had COVID so everything has to be put into perspective doesn’t it?

“I am greatly relieved: we make Bond movies for the cinema and we’re here and I couldn’t be happier about that.”

The 53-year-old arrived at the premiere in a dark pink suede dinner jacket over a white shirt and black bow tie.

Several healthcare workers and members of the armed forces were joined by the Prince of Wales, the Duchess of Cornwall, and the Duke and Duchess of Cambridge at the premiere.

Charles, Camilla, William and Kate were on the red carpet, along with Craig and other members of the cast, including Rami Malek, Lea Seydoux and Lashana Lynch, at the Royal Albert Hall.

Image: British tennis player Emma Raducanu swapped the green grass of Wimbledon for the red carpet Image: Prince Charles and the Duchess of Cornwall were joined by the Duke and Duchess of Cambridge

Raducanu, who won the US Open earlier this month, left the practice courts behind to attend the star-studded screening.

No Time To Die is the 25th Bond film and it will be the final movie featuring Craig as 007.

It has been delayed for more than a year due to the coronavirus pandemic but will be released in UK cinemas on Thursday.

Image: The Prince of Wales speaks to Daniel Craig Image: Phoebe Waller-Bridge at the Royal Albert Hall in London Image: Singer Billie Eilish speaks to the media during the world premiere

No Time To Die sees Bond enjoying a quiet life in Jamaica having left active service when his old friend from the CIA Felix Leiter, played by Jeffrey Wright, turns up and asks for his help.

A mission to rescue a kidnapped scientist becomes far more treacherous than expected and leads to a mysterious villain armed with dangerous new technology.

For 2015’s Spectre, William and Kate and the Duke of Sussex attended the event.

Things looked a little different at the biggest premiere London has seen post-pandemic.

There was no media scrum – far fewer crews than would usually be accommodated were spaced out with a strict policy of 1.5 metres between them and the cast being interviewed, with everyone off-camera wearing black masks to fit with the black-tie dress code.

Instead of the usual autograph hunters and fans hungrily waiting behind barriers for the stars, NHS workers and the armed forces were invited to attend the red carpet, see the film and meet the cast.

Talking ahead of the premiere, the franchise’s producer Barbara Broccoli stressed that these were the heroes, not just James Bond.

The day had been filled with glorious sunshine that gave way suddenly to greying skies as clouds released their rain forcing media and crew alike to scurry for shelter and cover electrical equipment.

Still, stars of the film including Rami Malik, Lashana Lynch and Naomie Harris braved the very British weather for the premiere.

Daniel Craig, proving that he may not have as fractious a relationship with the press as we have been led to believe, kindly telling us to “stay dry”.

Alongside the star power of the lead actors there was no shortage of excitement with props like cars, motorbikes and a giant silver 007 sitting prominently near the entrance to the Royal Albert Hall.

Giant screens projected clips from the latest film as Bond songs by Sam Smith, Adele and the latest pop star to take the lead – Billie Eilish – played out on speakers.

Celebrity guests including Stormzy and Jason Momoa were among those heading down the red carpet, and will be among the first to see this Bond film – arguably the most anticipated ever thanks to release delays, Craig’s final outing and the secrecy shrouding the movie.

No mean feat in a world where script leaks and promo tours mean we usually know what to expect long before we get in front of the big screen.

Tonight may have been a very British goodbye, with the weather refusing to play ball. But with a real sense of occasion and, of course, the royal seal of approval. it was also fittingly glamorous for the Bond who dragged 007 into the 21st century, redefining how we see the franchise.

No Time To Die review: ‘Genre-bending’ Bond film is ‘relentless’ but worth the wait