Wicked The Musical: Writer and cast reflect on gravity-defying show as it returns to West End 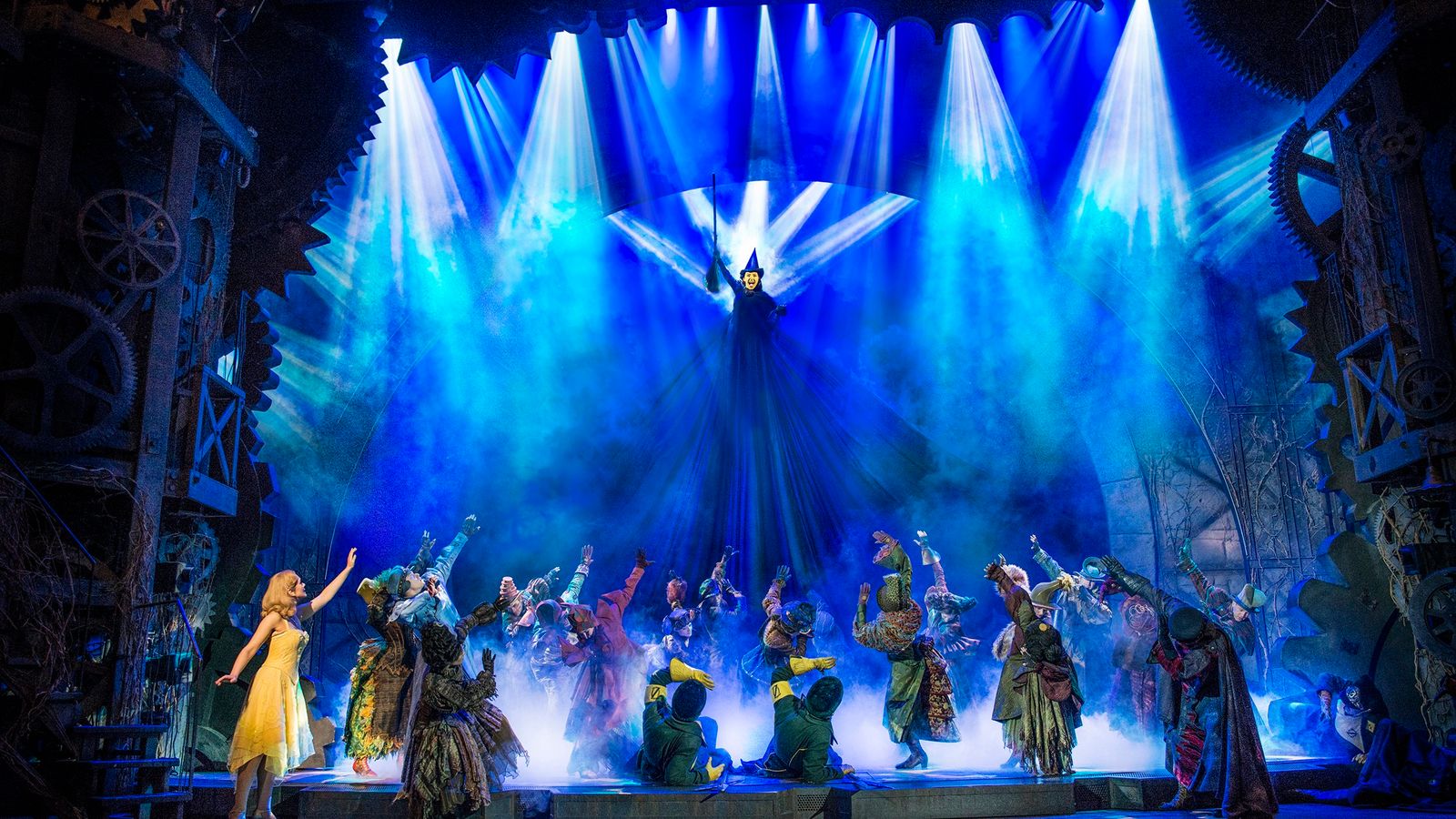 Everything about Wicked The Musical is big.

It’s got a big cast, big staging, a load of big songs, it plays in one of London’s biggest theatres, and has a big fanbase.

The production, which depicts the story of The Wizard of Oz from the perspective of Elphaba, the wicked witch of the west, and her university friend Glinda, has been wowing London audiences for 15 years now – and shows no signs of letting up.

Image: Wicked is performed in one of London’s biggest theatres. Pic: Mark Senior

It helped the likes of Idina Menzel and Kristen Chenoweth become household names when they originated the lead roles of Elphaba and Glinda in New York, and is known for its belting soundtrack of musical numbers such as The Wizard And I, I’m Not That Girl, and – of course – one of the most recognisable show tunes in history: Defying Gravity.

Along with vast parts of the theatre industry, the landmark, gravity-defying show has now reopened at its home at the Apollo Victoria in central London – and it’s never looked better.

“As they say, there’s no place like home,” writer Stephen Schwartz told Sky News during a chat at the theatre. “It’s nice to be back here.”

Schwartz is the brains behind the show’s music and lyrics, but says it’s the story that keeps people coming back to the Emerald City.

“All of us have that green girl inside us,” he said.

“All those questions are, of course, deeply ingrained in the story of the show, and I think that strikes a chord.”

While the many people watching may see themselves as outcast lead Elphaba (who, yes, is painted green before every show), Wicked also has another focus – it’s not a love story, but instead the tale of friendship between two women.

“The other thing is that the show is essentially a bromance between two women,” says Schwartz.

“Culturally, society was ready for a story about two strong women and their relationship – there really hadn’t been one before, and it came out at exactly the right time.

“Plus it’s Oz, everybody likes to be in Oz.”

It’s something echoed by the show’s stars Laura Pick and Sophie Evans, who play Elphaba and Glinda respectively.

Pick, who was taking a break from the green body paint, told Sky News people return because of their characters’ story.

“This is essentially a love story about two friends. Things come along and get in the way, but the root of it is their friendship and what they go through together,” she said.

“Everybody, I’m sure, at some point in their life has felt a bit like Elphaba. Not green, but being an outsider and having to battle that.

“It inspires people to think, ‘I want to actually stand up for what I believe in… be different, embrace being different and find a way through’.”

Evans adds that focus is on friendship, and that “deep down, we’re both fighting for what we think is right”.

“I think as women, it’s quite empowering. We’re both feminists, really,” she says.

Musical theatre has always been known for pushing cultural boundaries, with Wicked being no different.

“I’m very proud that Wicked, both here in the West End and on Broadway, has been pioneering in terms of our casting,” Schwartz said.

“Not just the original cast – we’ve had actors of colour, Asian actors, Latino actors, trans actors, all just playing the different roles, all based on their particular skill and their rightness for that role, rather than, ‘oh, well, this is the role that’s played by an actress of colour’.

“But I think because the message of Wicked, as I say, being about a girl who’s green, which is obviously a metaphor, I think… that’s the idea of diversity and acceptance… it’s so intrinsic to the show itself that it was important that the cast and in fact, backstage crew and everybody, represent what the show is about.”

Image: The show runs alongside the story of The Wizard Of Oz. Pic: Mark Senior

For Welsh actress Evans, getting that casting call from the producers was a “dream come true”.

“I literally collapsed on the floor at my house,” she admitted.

“This show, especially for people our age… we would have been teenagers when it first came out.

“I came to see the show when I was 15 for my birthday, and I remember just being completely mesmerised… and just thinking, ‘I need to do this, whether it’s musical theatre or this show or anything to do with it’.”

For Pick, she told Sky News that when she was a teenager, she saw Menzel (who went on to play Elsa in Disney’s Frozen no less) at the London previews and remembers “sitting in the audience in floods of tears… knowing that’s what I wanted to aspire to”.

Their stories are the proof that the show’s fanbase is truly dedicated to the story.

But will audiences come back?

Image: Evans and Pick say the show is focused on their characters’ friendships. Pic: Matt Crocket

It’s a question mulled by Schwartz, who wants to reassure audiences that they will be safe in the theatre.

“I think people have been understanding that and have been returning and then realising how much they’ve missed this kind of group experience – so I’m pretty hopeful.

“The truth is, we had no idea when we were reopening shows both here in the West End and in New York if anybody would actually come – but so far they have been and so far it’s been proving safe for the audience. So I’m pretty optimistic that will continue.”

Wicked The Musical has reopened in both London and on Broadway, with tickets available now.

Britney Spears: A moment of joy and release for the campaign to ‘free’ the star