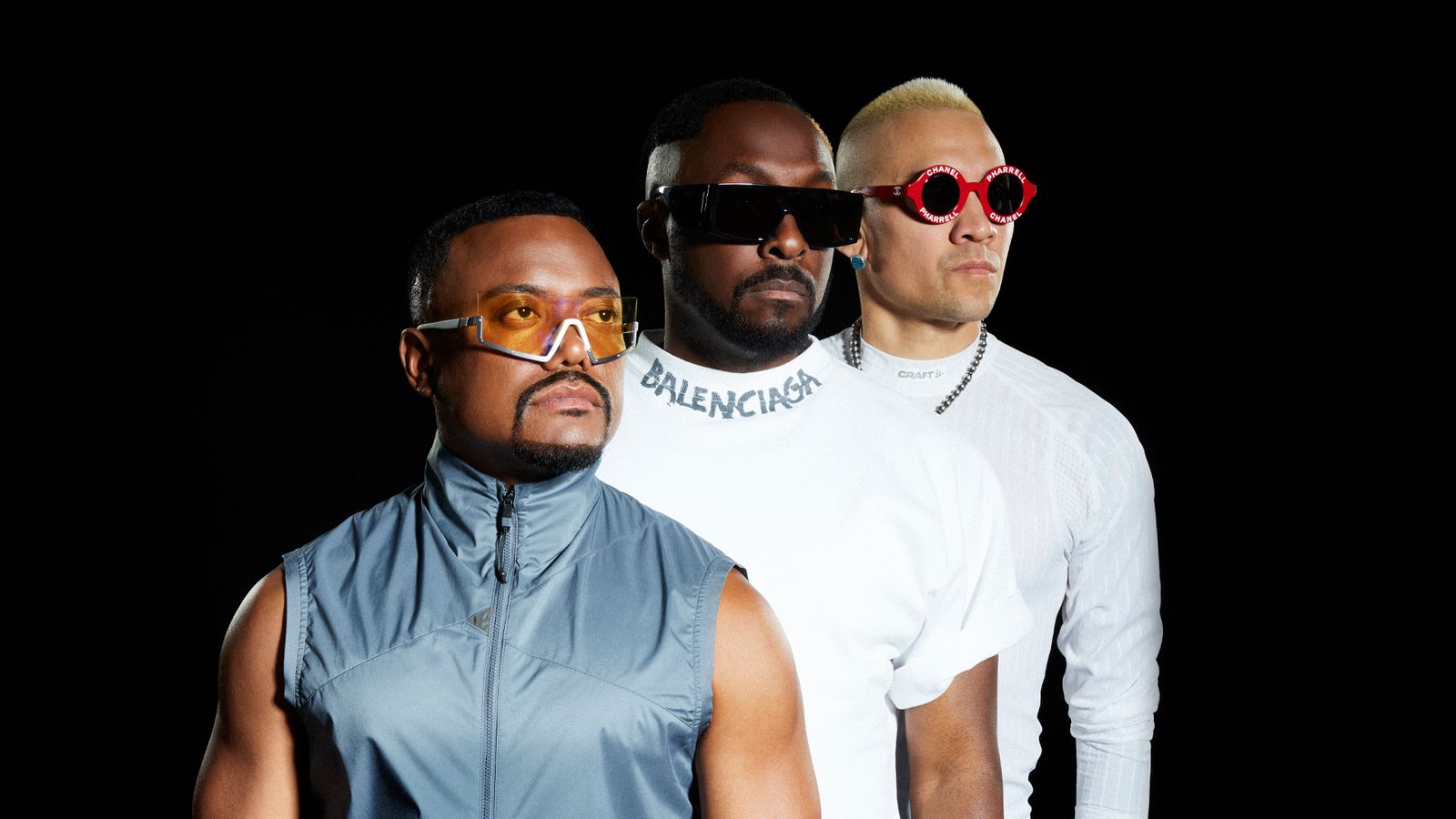 The Black Eyed Peas have shared their excitement ahead of a gig at the Pyramids in Egypt at the weekend.

Around 13,000 people will be watching the group’s show live in Egypt on Saturday night, while millions more will be able to live-stream the gig on LIVENow.

Speaking to Sky News from their hotel in Cairo, will.i.am, Taboo and apl.de.ap said that being back in front of live audiences again was “pretty surreal and fantastic in every sense of the word”.

Taboo said: “It has been a great two weeks of just getting back on the road and performing in front of live audiences, which is amazing.

He added: “And to end off our run here in Cairo, It’s going to be an amazing experience.”

will.i.am, one of the world’s biggest music moguls, said the trip was inspired by his favourite disco act: “I grew up listening to Earth, Wind & Fire and just staring at the album covers because it was like full of Egyptology.

“Because of my personal love for Earth, Wind & Fire, it was always a dream to come to Egypt and play near the pyramids.

“When we got off the aeroplane, to get a call from Verdine from Earth, Wind & Fire, magically, was pretty surreal and serendipitous.”

The band are playing in Cairo off the back of their latest Global Citizen appearance in Paris last weekend, with will.i.am saying seeing a sea of faces was “beautiful”.

“For us it was 45 minutes of joy in providing escape to our music, giving people some peace of mind and some celebratory moments. That was that was magical.

“But then couple that with, you know, the whole sentiment of what global citizen is standing for, to be in a sea of people for a cause is even more important and we are so honoured to have been selected to play that.”

Black Eyed Peas also explained that their shows look a little different now, with backstage “mask police” and constant PCR testing, adding their venues are safe places to be.

Taboo said: “I love the feeling of going to a work environment, knowing that I’ve got PCR tests and knowing that we are trying to be as mindful and is safe as possible, but also taking the proper precautions with the staff and the crew that is around us as well.

However, apl.de.ap added it was the transport between venues where “protocols are not as tight as they are when you’re in the building or outside the building, when everybody is in a tight proximity and it’s loose – that’s where the concern is”.

will.i.am applauded ITV, after it was able to produce The Voice (on which he is a long-standing judge) at the height of the pandemic.

“We were filming when the whole city was locked down, when there was curfew and everyone was safe – so I think that that didn’t go unnoticed by other television networks, other promoters, other folks that bring people together,

“There was no one in the audience, everyone was virtual at home. I think that show was one of the first ones to have the TV wall of audience and innovate around… people have now expected that when worst comes to worst, we could still go on air, bring joy to people, lift people’s spirits up, have awesome talent come on stage and sing.”

Image: Black Eyed Peas have been together since the 90s. Pic: AP

Since their breakthrough smash hit Where Is The Love? in 2003, the Black Eyed Peas have been a constant in the music industry.

“I think even saying brothers is limiting to how close we are, like our minds are mapped and we care about each other.

“When we make music, you feel it, you feel that joy, that appreciation, but there’s a difference between when we first came out to now – to have a song that competes and plays on radio stations and streams and added to awesome playlist, that’s like an extra effort of focus.”

Taboo added: “We have a very competitive, hunger and willingness to continue being students of the craft – always wanting to push the envelope of the style of music that were inspired by.

“Never being complacent because once you’re like, ‘oh, I made it’, then you lose that hunger, and we’ve had this hunger since we were teenagers.”