London Film Festival: From Spencer to Succession, here are 10 things to watch out for at this year’s event 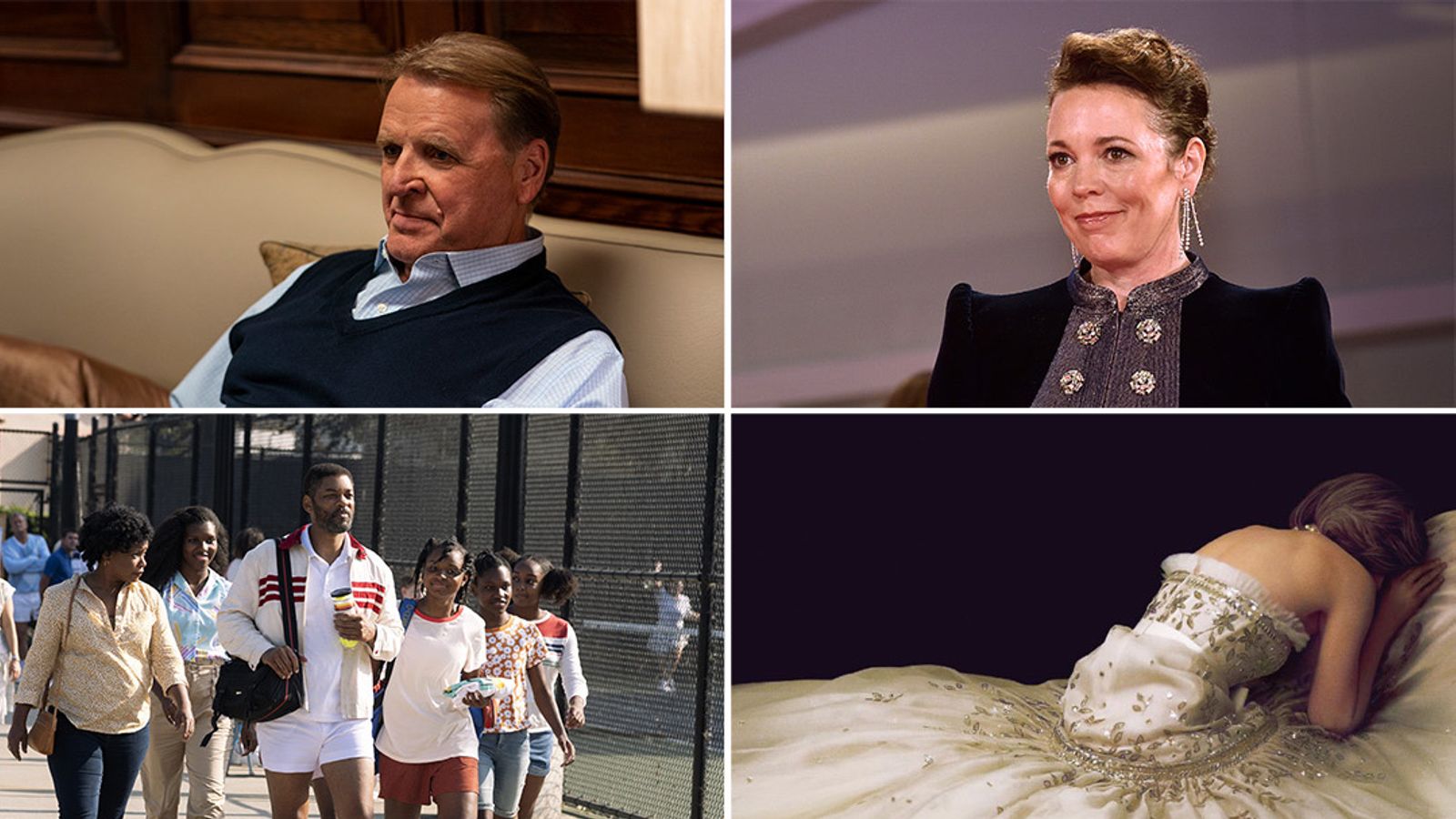 From Kristen Stewart’s portrayal of Diana to the hugely anticipated return of a fan-favourite TV show, the London Film Festival is back as cinemas are filling up once again.

Hot on the heels of the release of the latest James Bond film No Time To Die, which has smashed box office records, the prestigious film festival returns with physical, in-person premieres and red carpets, after the COVID-19 pandemic forced last year’s event online.

After months of cinemas being closed, Tricia Tuttle, director of BFI Festivals, which organises the flagship event, says it is an exciting time for the industry.

Image: No Time To Die, which premiered at the Royal Albert Hall in September, has broken box office records

“Bond has just come out and at the festival we’re going to be 100% capacity – with COVID safety protocols, of course,” she tells Sky News. “Audiences have shown willingness to go back to theatre and people are interested in these big, large-scale live events again.

“There is something incredible that happens when you sit in a dark, packed cinema. It really transforms the work and I can’t wait for our audience at the festival to have that experience this year.”

While the industry continues to find its feet with new filming protocols, the festival promises to wow film lovers with its line-up of more than 150 movies, 21 of which will be world premieres – as well as the return of a huge TV show.

Sky News has collated a list of things to watch out for during the festival, which starts on Wednesday.

British film fans will get their first glimpse of Kristen Stewart as Diana, Princess Of Wales in Spencer

Image: Kristen Stewart is the latest actress to take on the role of Diana, Princess Of Wales. Pic: Topic Studios

Arguably one of the most anticipated films of the year, Spencer will get its British unveiling at the festival.

The latest depiction of the people’s princess has been made by Chilean director Pablo Larrain and is set at the Sandringham Estate over the course of a Christmas weekend in the early 90s.

It will look at what could have happened over those days, as her marriage to Prince Charles stalled – but she was still required to be involved with the Royal Family.

It got rave reviews at the Venice Film Festival, with Kristen Stewart in particular winning praise.

It screens on the 7, 8 and 17 October at the Royal Festival Hall.

It got its world premiere at Telluride festival in the US last week, but European film buffs will get their first look at the latest Will Smith film.

King Richard is based on the true story of the Williams sisters’ rise to stardom, told from the perspective of their father Richard.

It’s already got “Oscars buzz” (read: critics reckon Smith might get a look in at the Oscars for it) and those who have already seen it reckon it’s a good film.

It screens at the Royal Festival Hall on 15 and 16 October.

Image: Wes Anderson (left) and some of the cast of The French Dispatch. Pic: Vianney Le Caer/Invision/AP

The film world absolutely loves a Wes Anderson film – which are known for being colourful, quirky and distinct.

His latest effort, The French Dispatch, is no different, having been described as a “love letter to journalists” (Thanks, Wes – we love you too), it stars one of the busiest men in Hollywood at the moment, Timothee Chalamet, as well as ensemble cast featuring comedian Bill Murray, Doctor Strange star Tilda Swinton, and Loki actor Owen Wilson.

It follows the the French foreign bureau of a fictional Kansas newspaper as it creates its final issue.

As you would expect, it’s already had plenty of praise heaped on it since it had its Cannes premiere, so expect screenings to be pretty busy.

Starry Shakespeare is closing the festival

Image: The Tragedy Of Macbeth will close the festival. Pic: Apple TV+

The Tragedy of Macbeth, a new version of the classic Shakespeare play, will close the festival on 17 October.

We’ve seen a lot of big screen Shakespeare adaptations throughout the years, with this latest one starring two Oscar-winning actors – Denzel Washington and Frances McDormand – in the lead roles.

It’s in black and white, and has an exciting, ethnically diverse cast, including the likes of In The Heights star Corey Hawkins, Irish acting royalty Brendan Gleeson and the rough-voiced northern Game Of Thrones actor Ralph Ineson.

Joel Coen (one of the Coen Brothers – Hollywood’s power-siblings) is in the directing chair for this one, and reviews are yet to come out, because it doesn’t get a screening until later in October at the New York Film Festival.

One fans have been waiting for – season three of Succession

But hold on – this is a film festival?

Yes, it is, but with the line between film and TV blurring every year, it feels right to include the blockbusting show at the festival.

The first two episodes of the third season of Peep Show writer Jesse Armstrong’s comedy-drama will screen at the event before it hits Sky later in the year.

Image: A new Idris Elba western will open the festival

This year’s festival will open with the world premiere of The Harder They Fall, inspired by the real African-American cowboys whose stories are rarely told.

Later in the festival The Power of the Dog, from director Jane Campion (the first and only female director to ever win Canne’s Palme d’Or for The Piano back in 1993 – you’re welcome festival trivia fans!), will tell the story of two rich brothers running a ranch on the edge of a frontier town.

The film premiered to very favourable reviews in Venice last week, with Benedict Cumberbatch being tipped for the awards race for his performance in the drama, which also stars Kirsten Dunst and Jesse Plemons.

Image: Olivia Colman will be featuring in The Lost Daughter To London. Pic: Jennifer Bloc/Geisler-Fotopress/picture-alliance/dpa/AP Images

First timers are certainly welcome at LFF with one of the prizes going to the most original and imaginative debut, but there are two we wanted to highlight.

Maggie Gyllenhaal will bring her adaptation of Elena Ferrante’s The Lost Daughter to London, starring Olivia Colman as a woman who while on holiday becomes obsessed with another woman and her daughter. The supporting cast includes Dakota Johnson, Jessie Buckley and Paul Mescal.

Elsewhere Sadie Frost is turning her hand to documentary with Quant about the fashion designer Mary Quant.

She told Sky News she’s thrilled her film’s been included as it’s been a massive undertaking: “I got an opportunity to direct and even though I’ve done short films before I’ve never actually directed a feature-length documentary and the responsibility of that is huge, but I threw myself in to it and I’ve gone back and done a masters in film studies and a directing course at Raindance.”

Family fun from a British studio for a British festival

Ron’s Gone Wrong is the first film from British animation studio Locksmith and explores what happens when Artificial Intelligence has a mind of its own.

It’s directed by Jean-Philippe Vine and Sarah Smith who told Sky News how exciting it was to be included on this year’s line-up: “We were delighted because to have the opportunity to have a big UK event, it’s a UK studio and we’re super proud of that, and the London Film Festival is unbelievably vibrant – who could not be proud of this country in terms of films when you see the London Film Festival”.

As if the mere idea of watching a film in a cinema with other people isn’t exciting enough after the last 18 months, there’s also plenty on offer for those wanting a new way to experience storytelling.

This year’s expanded programme at LFF has, well, expanded – the idea is to showcase different mediums so expect Augmented Reality, Virtual Reality, immersive audio and more as the festival looks to highlight work that doesn’t come under the traditional ‘film’ heading.

It might be called the London Film Festival but that doesn’t mean you have to be in the capital to get involved.

After last year’s event was forced to be virtual, organisers were pleased with how going online increased accessibility and as well as a virtual offering this year, partner cinemas across the UK will also show a selection of festival films.

The BFI London Film Festival runs from 6 to 17 October

Conservative conference 2021: Friendly Fires hit out at Tories for using their song at Boris Johnson’s speech