Laura Mvula on missing out on the Mercury Prize, National Album Day, and celebrating women 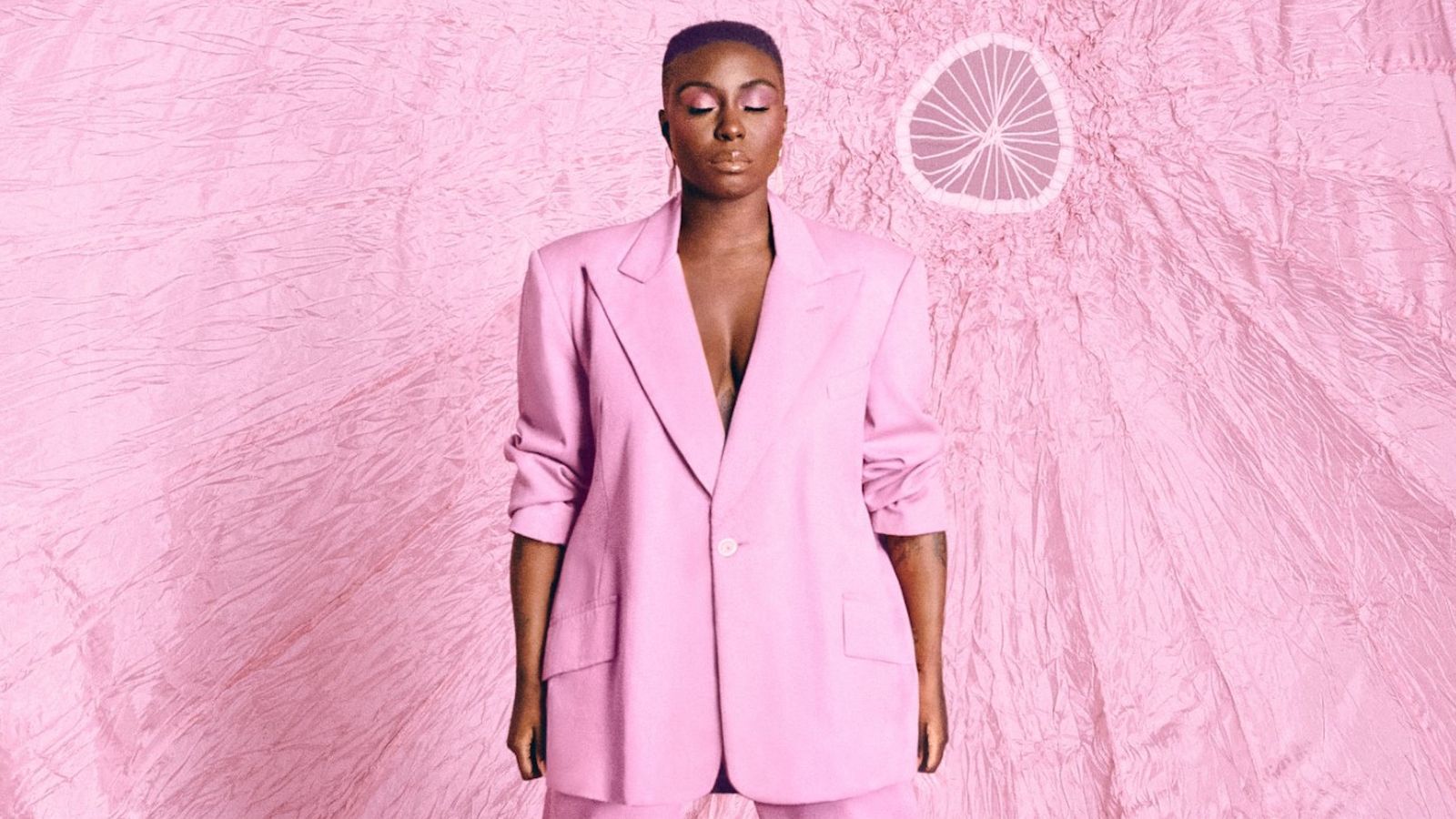 After this year’s Mercury Prize ceremony had wrapped up, Laura Mvula found herself in tears in a hotel room. Nominated for a rare third time – she has never released an album that hasn’t been shortlisted – the pressure had built up.

While Mvulanever really went away, the ’80s pop-inspired Pink Noise was a return of sorts, released through Atlantic in July after she was unexpectedly dropped by former record label Sony early in 2017. A difficult period was followed by yet another when the pandemic hit, and suddenly an accolade that previously would simply have been the cherry on top of an exceptional career had become all-consuming.

On the night, the prestigious Mercury Prize went to Arlo Parks, for her debut album Collapsed In Sunbeams. “I get robbed. A lot,” Mvula tweeted afterwards, following it up with: “Mercury Prize can lose my number.” The next day, she shared a longer message on Instagram: “I really thought Pink Noise might’ve won last night… I needed it for several reasons too complex to dive into here. I don’t expect to be understood fully by the British public but try not to judge my pain… I’m just tired. Please buy the album if you can and come to a show. Many thanks. Love you.”

A few weeks later, Mvula is feeling a lot more positive, her energy and infectious laugh lighting up a Zoom call. We are here to talk about National Album Day, for which she is an ambassador this year, and she is keen to praise the artists who have inspired her – everyone from Erykah Badu, Jill Scott and Des’ree to contemporaries such as Lianne La Havas, Little Simz and Nao, as well as the late Amy Winehouse and composer Errolyn Wallen.

She is also candid about how strongly she feels about her own record and the Mercury Prize. There is “no malice” towards Parks but she is honest about how missing out made her feel.

“I was so exhausted,” she begins. “I don’t just mean from the day, I mean from the moment I even thought about making a third record… I’d had two previous nominations so there was a sense of ‘third time round’. I allowed myself to get caught up in the noise, pardon the pun, of it all. That’s what I regret the most, is that for the first time I really started to make so many things matter to me that ordinarily have nothing to do with what I really care about.”

Mvula chuckles as she adds that she’s “mid-30s, still trying to make a living”, but it matters. It’s not often an artist is so candid about their own personal situation, but the way the industry treats female artists as they get older is no secret.

“It’s a weird thing to get used to high critical acclaim,” Mvula goes on. “There’s something bittersweet because it’s wonderful to be acknowledged as an artist who makes things people respect. That’s something I consider to be a high privilege and something I’m proud of. But at the same time, when it doesn’t necessarily translate to something tangible, that can be where it gets complicated. And [there’s a] need or desire to be visible and to have a growing audience, to not want to just have a legacy that is, ‘yes, we know of her, but oh, she never broke through’, or whatever the narratives are in my mind.”

Of the handful of artists who have been nominated three times or more, the classically trained musician is not in bad company when it comes to those who have not won: David Bowie, Coldplay, Laura Marling, Florence And The Machine, to name a few; Radiohead have a record five nominations, but no win. So clearly it speaks nothing of her talent; she won the equally prestigious Ivor Novello award for best album in 2017 – just months after being dropped by Sony – for the previous year’s The Dreaming Room, on which she collaborated with Nile Rodgers and reportedly had to turn down Prince.

But still, in that moment, it hurt. “I really yearned for it in a way that I wasn’t even ready for. When it went to Arlo, it was almost nothing to do with Arlo Parks and her music and Laura Mvula and her music, and all the other artists and the music, it became about something else.”

She refers to recent comments made by Ed Sheeran about awards shows, which he described as “filled with resentment and hatred”. “There’s something really draining about the whole experience, and the win and the lose aspect,” Mvula admits. Her tweets after the Mercury Prize were tongue in cheek, she says, but came from a place of truth. “I guess, that was the real, unfiltered Laura. It was my rejection of all the pressure and all the nonsense and all the being pitted against one another… Here we are all desperately trying not to care. But somehow you end up caring so much.”

Back in the hotel room, Mvula’s friend and sister suggested she take her online posts down. “I just went to bed crying. I ignored them and I felt sort of more alone in that moment.” In the morning, they discussed a “pain” that many women will identify with. “We’re not supposed to say things that make us look not elegant and put together and demure and softly spoken, because anything else is just ugly,” says Mvula.

“I’m not going to lie: there was something very liberating about saying what I felt, knowing that I hold no malice in my heart at all towards Arlo or any other artists, but knowing I feel so passionately about what I do, and that me and the people who work so hard around me deserve some kind of break.” She shrugs. “That was it, really.”

Image: The star says she has become more comfortable being ‘loud and noticed’. Pic: Danny Kasirye

She is sanguine about it all now. The reason the Mercury Prize matters is because it celebrates the album as an art-form, something Mvula feels passionately about. Pink Noise and its ’80s shoulder-padded aesthetic is a fun record, a shift from the more experimental, baroque soul of her first two albums. But making it did not come easily. “In the beginning… even making one song would have felt impossible at one stage,” she says, because she has to “really believe” in everything she puts out. But now it’s here, vibrant, unsubtle and a statement of intent, she couldn’t be more proud.

“I wasn’t always the most confident person, I didn’t always want to feel loud and be noticed or be seen or heard. In fact, the idea of being on a stage as a solo artist was something that used to freak me out. Pink Noise was my celebration of my life in its loud, bombastic, romantic, fragile glory.”

While the colour pink held lazy connotations and once felt “imposed” upon young girls growing up, now Mvula embraces it. “I wasn’t interested in wearing pink clothes and fluffy dresses because that supposedly fit some ideal or that meant I was beautiful and whatever,” she says. “And weirdly, I feel more beautiful [now] than ever.”

Along with artists including Kylie Minogue, Ray BLK and Sharleen Spiteri, Mvula is an ambassador for National Album Day 2021, which is this year shining a spotlight on female performers. “I think it’s so important to lift women up, and specifically in the arts and making albums because for decades there’s so many unsung heroines.”

When it comes to black, female artists especially there is “always so much work to be done” she says, in terms of making the opportunities available and visible. “But I’m encouraged because I do feel like we’re now living in a time where there’s much more awareness, much more dialogue, and there seems to be a widespread acknowledgement.

“My story began in music because I was taught I could do anything; there wasn’t a room I felt uncomfortable in, whether that was learning to play the violin and piano or putting a neo-soul band together when I was in my teens, or singing in an a cappella group with my auntie. At the time as a kid, I was not aware of how rich that plethora of different experiences was.”

Mvula is positive. “I think we’re living in exciting times,” she says. And that also applies to being able to perform live again after more than a year of venues being shut. So far this year she has performed at the Olympics Homecoming ceremony with Rodgers and played a sold-out show at Islington Assembly Hall, as well as at the Edinburgh Festival. A tour is planned and as well as Pink Noise, she also features on the soundtrack to “new-school Western” The Harder They Fall, starring Idris Elba.

“I now feel sort of ready to refocus on the next thing, which for me is performing and getting back on the road,” she says. “Trying to get that good feeling back that I think the pandemic stole from a lot of us who made lockdown albums. I think there’s a weird exhaustion that comes from that as well.”

It has been a challenging time, “dire for everyone”, she admits, but good things are on the horizon. “I was chatting with my accountant on text, and he was like, ‘yeah, man, it’s rough’, but he said we’re going to get back on the road and, you know, it’s not going to be so troublesome,” she laughs.

“We’re on the up and up, it’s just gradual. And I think that’s good because my God, am I now savouring everything. I do not miss a moment, you know, I really just drink it in. There is beauty in suffering, I think. That’s what I’ve been taking from this very trying time.”