‘Whoever you are, you burned down the wrong gates’: Chris Packham defiant after arsonists target his home 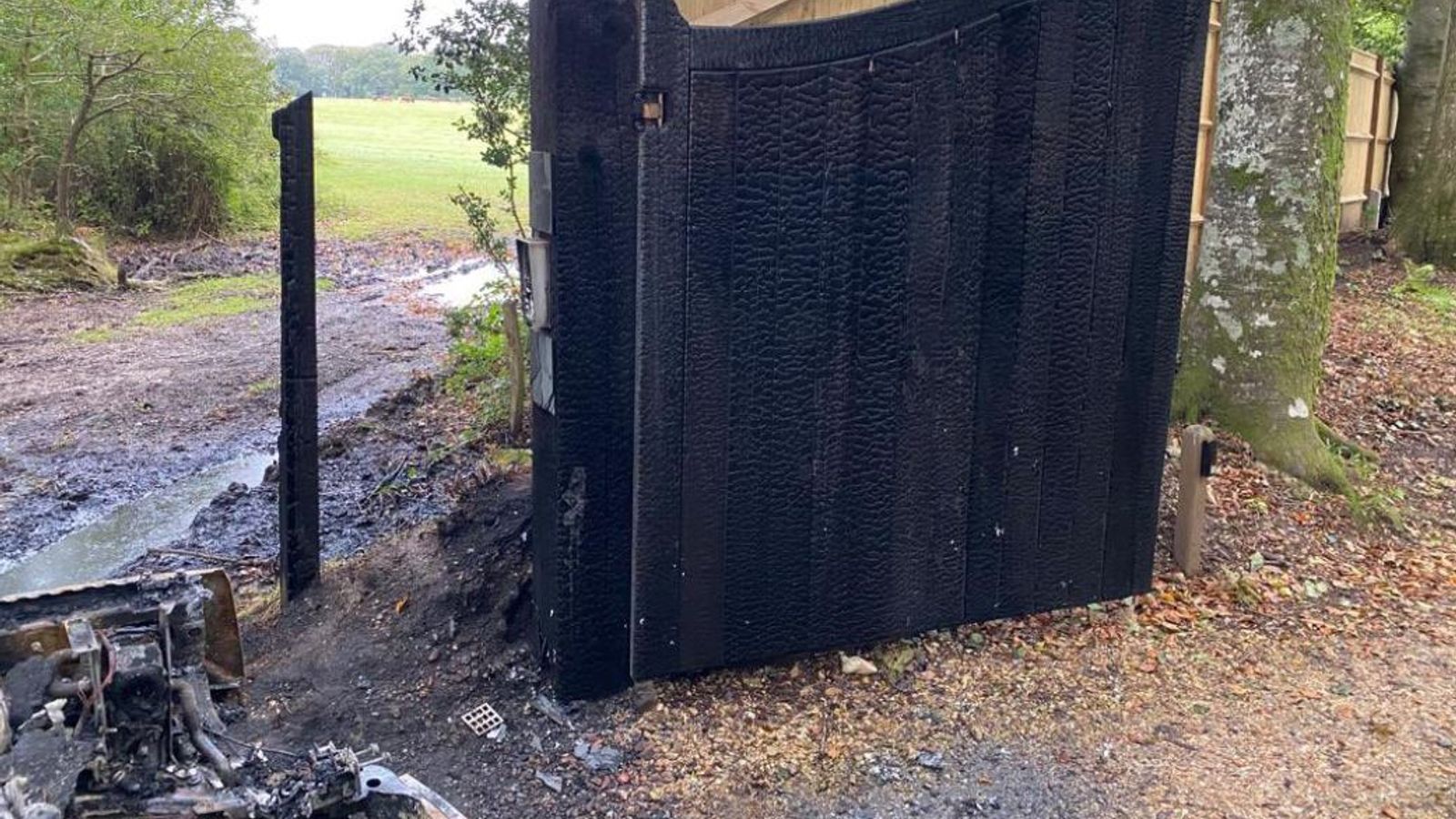 BBC Springwatch presenter Chris Packham has vowed to continue his advocacy for wildlife, despite an arson attack outside his home.

The 60-year-old was home alone when two hooded masked men drove up to his gate and set their vehicle on fire at about 12.30am on Friday.

The vehicle – a Land Rover – exploded and the front gate of Packham’s home in Hampshire’s New Forest caught fire and was destroyed.

Image: Chris Packham is a TV presenter and environmentalist

In a video posted on Twitter, Packham said: “All I can say is whoever you are, you burnt down the wrong gates.

“If you think that by burning down those gates, I’m suddenly going to become a supporter of unsustainable illegal shooting, the unwarranted savagery wrought upon foxes in our countryside when they’re torn to pieces by dogs, then you’re wrong.

“I will, of course, just carry on because I have no choice.

“I cannot and will not let your intimidation sway me from my cause, and that’s why I don’t really understand why you would do it.”

Packham told his 486,000 followers that the arsonists “took great pains to hide themselves” as they fled in a getaway car, adding that they were “fully aware of the CCTV that was in place”.

Firefighters arrived and were able to put out the fire, but not before it caused “extensive damage”, Packham said.

He said that “internet trolls” were among those suspected of being behind the attack, adding that they regularly “fill my timeline with hate, defamatory comments, libellous comments, but lots of hate calculated to damage myself and my interests”.

“I wonder about the internet trolls because they get away with it.

“Despite working effectively with the police, the law as it stands means that I’m unable to take any action against this form of harassment, but it is hate crime – there’s no ambiguity about that.

My own private Thermopylae . On Friday morning I was the victim of an arson attack on my home . I would like to thank @Lyndhurst48 & @HantsPolice for their work . We have CCTV images of two hooded and masked men . If anyone has any information please call 101 quoting 44210403698 pic.twitter.com/o9rOIEuBp7

“It’s a little unfair that when black footballers receive unwanted and appalling hate crime, the issue can be dealt with – that’s great of course, and I support that fully.

“But I am surprised that when environmentalists like myself receive similarly hateful torrents of relentless abuse, nothing can be done about it.

“Because ultimately, of course, it does come at a cost – perhaps the cost is having my gate burnt down, causing thousands of pounds worth of damage.”

Packham has been targeted before – he has had dead birds, dead foxes and dead badgers left at his gate.

He has also received death threats, and had barbed wire left on his driveway to puncture his tyres.

Only hours after Friday’s attack, the environmentalist led a march to Buckingham Palace, calling on the Royal Family to re-wild their estates.

He encouraged his fans and followers to write to organisations such as the National Trust and the National Parks Authority to ask them to ban trail hunting on their properties.

As for his next move, he said: “I’m going to buy some new gates and carry on.”

Revealed: The top 20 most played female artists of the 21st century