Wildlife Photographer Of The Year: The best animal and nature images of 2021 revealed as competition winner is announced 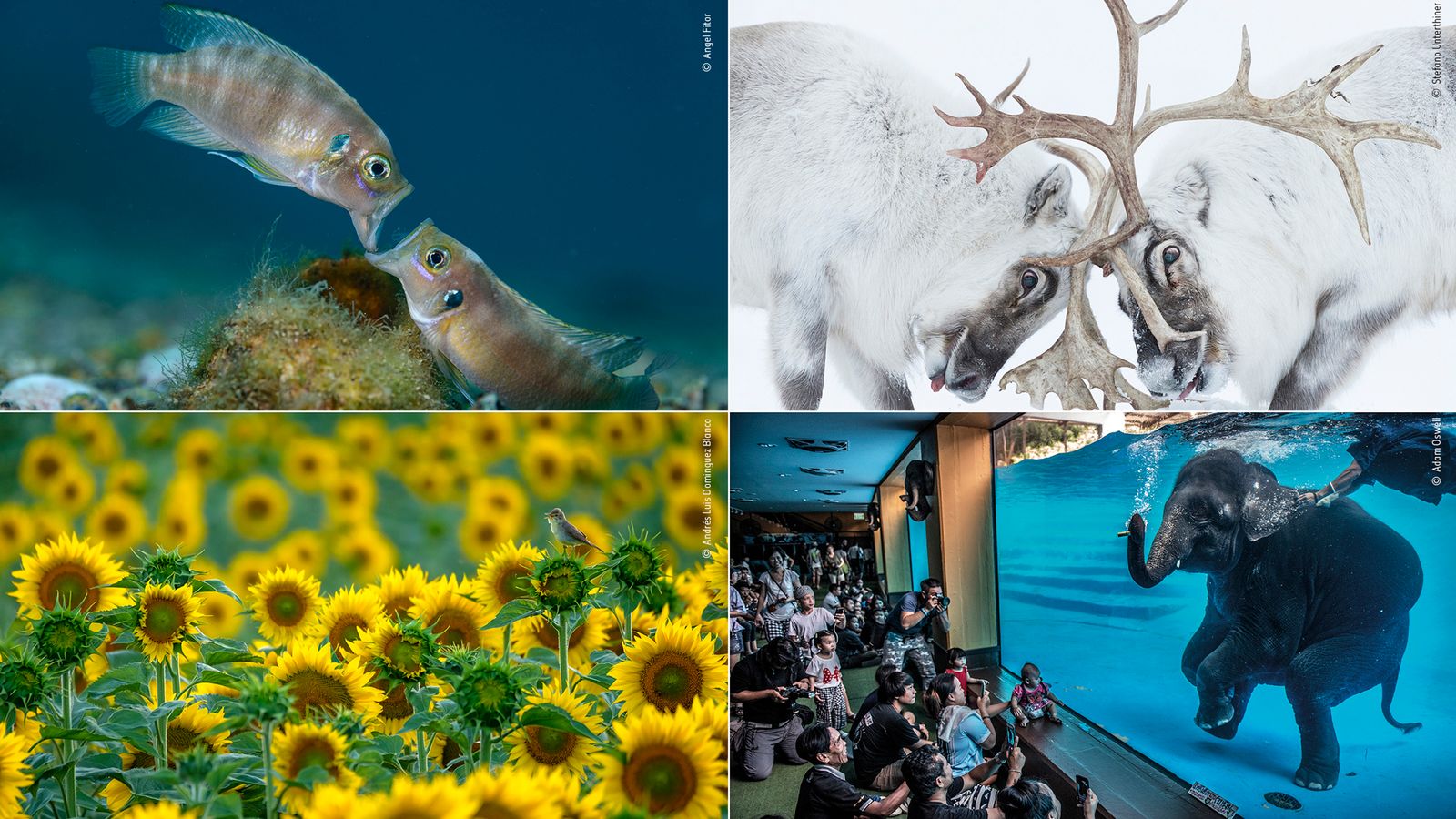 A shot of a rare underwater spawning that only takes place around a full moon once a year has been named as the winner of this year’s Wildlife Photographer Of The Year competition.

It has been selected as the winner of the Natural History Museum’s prestigious annual competition, now in its 57th year, from more than 50,000 entries from 95 countries.

Ballesta’s photograph captures camouflage groupers darting away from a milky cloud of eggs and sperm in Fakarava, French Polynesia. It was the result of returning to the lagoon every year for five years, diving day and night so as not to miss the annual spawning.

Writer and editor Rosamund Kidman Cox, chair of the judging panel, described the image as “surprising, energetic and intriguing” with “an otherworldly beauty”.

She added: “It also captures a magical moment – a truly explosive creation of life – leaving the tail-end of the exodus of eggs hanging for a moment like a symbolic question mark.”

Camouflage groupers are a vulnerable species threatened by overfishing, but in this area they are protected within a special biosphere reserve.

Natural History Museum director Dr Doug Gurr described Ballesta’s image as a “compelling reminder of what we stand to lose if we do not address humanity’s impact on our planet”, and said that “the protection provided to this endangered species by the biosphere reserve highlights the positive difference we can make”.

Elsewhere, 10-year old Vidyun R Hebbar was awarded the Young Wildlife Photographer of the Year 2021 award for Dome Home, a colourful image of a tent spider pictured near his home in the city of Bengaluru, in India, as a tuk-tuk passes by in the background.

Dr Natalie Cooper, a Natural History Museum researcher, said it was “a great reminder to look more closely at the small animals we live with every day, and to take your camera with you everywhere”.

The two overall winners were selected from 19 category winners, showcasing everything from stunning animal portraits to interesting behaviour, as well as photojournalism images and portfolios. Here are the 17 other category winners.

Grizzly Leftovers by Zack Clothier – Animals In Their Environment winner

US photographer Zack Clothier decided the remains of a bull elk in Montana provided the perfect spot to set up a camera trap to capture any interested animals passing by. But melted snow and fallen trees meant a challenging journey back to the scene, and when the photographer did return his set-up had been ruined. However, this surprising shot of a grizzly bear turned out to be his last frame.

Majed Ali, from Kuwait, trekked for hours to find Kibande, an almost-40-year-old mountain gorilla, but it was worth it to get this snap of the ape closing its eyes in the rain, seemingly enjoying the shower. Mountain gorillas are found at altitudes of over 1,400 metres in two isolated populations – at the Virunga volcanoes in Rwanda and in Bwindi, Uganda – and are endangered due to habitat loss, disease, poaching and disruption caused by human activity.

UK photographer Alex Mustard’s image is of a juvenile ghost pipefish hiding among the arms of a feather star – its loud colours signify that it had not long landed on the reef; its colour pattern would later have changed, enabling it to blend in.

Gil Wizen (Israel/ Canada) discovered this fishing spider under some loose bark in a forest near his home in southern Ontario, and managed to capture it stretching out silk to weave into its egg sac. “The action of the spinnerets reminded me of the movement of human fingers when weaving,” Wizen said.

This picture by Canadian photographer Shane Kalyn shows a raven courtship display captured in midwinter, the start of their breeding season. Lying on the frozen ground, he watched as the couple exchanged gifts – moss, twigs and small stones – and preened and serenaded each other before coming together for the perfect picture.

Stefano Unterthiner, from Italy, followed these Svalbard reindeer during rutting season and caught these two battling for control of a harem, clashing antlers until the dominant male chased his rival away. Reindeer populations in the Arctic are affected by climate change, as increased rainfall can freeze on the ground and prevent access to plants that would otherwise sit under soft snow.

Where The Giant Newts Breed by Joao Rodrigues – Behaviour: Amphibians and Reptiles winner

Joao Rodrigues, from Portugal, came across a pair of courting sharp-ribbed salamanders in a flooded forest – his first chance in five years to dive into the lake, which only emerges in winters of exceptionally heavy rainfall. He said he had a split second to adjust his camera settings and capture the moment before the newts swam away.

Following a storm, it took hours of searching by helicopter for US photographer Jennifer Hayes to find this fractured sea ice used as a birthing platform by harp seals. “It was a pulse of life that took your breath away,” she said of her image. Every autumn, harp seals migrate south from the Arctic to their breeding grounds, delaying births until the sea ice forms. But they depend on the ice – which means that future population numbers are likely to be affected by climate change.

Justin Gilligan, from Australia, created the reflection of a marine ranger among the seaweed for this striking photograph, taken at the world’s southernmost tropical reef. He said he wanted to show how careful human management helps preserve a vibrant seaweed jungle – and had just 40 minutes in which tide conditions were right to get his image.

A second winning spider shot for Wizen, who found this venomous Brazilian wandering spider hiding under his bed after noticing tiny spiders all over the room. Yikes. Rather than run away, he grabbed his camera to capture what is one of the world’s most venomous spiders, which is the size of a human hand.

Using a drone, Javier Lafuente, from Spain, captures the stark line of a road slicing through a wetland landscape, which is home to more than a hundred species of birds.

Elephant In The Room by Adam Oswell – Photojournalism winner

Adam Oswell, from Australia, said he was disturbed by this scene of zoo visitors watching a young elephant perform under water. Elephant tourism has increased across Asia and in Thailand there are now said to be more elephants in captivity than in the wild.

Brent Stirton, from South Africa, profiled a rehabilitation centre caring for chimpanzees orphaned by the bushmeat trade in the Democratic Republic of the Congo. This image shows the director of the centre sitting with a newly rescued chimp she is slowly introducing to the others.

This image by Martin Gregus (Canada/Slovakia) shows two female polar bears cooling off and playing in shallow waters around Hudson Bay in Canada. Captured with a drone, he said he felt the heart shape symbolises the apparent affection between the two animals and “the love we as people owe to the natural world”.

These cichlid fish might look like they’re having a kiss, but they’re actually fighting over a snail shell. Angel Fitor, from Spain, captured the pair in Lake Tanganyika, which is spread across Tanzania, the Democratic Republic of the Congo, Burundi and Zambia in Africa. Fitor monitored the lake bed for three weeks – and while this struggle was over in seconds, it was just long enough to get a winning shot.

Enjoying itself sitting in the sunflowers on a warm afternoon is a melodious warbler bird. Andres Luis Dominguez Blanco, from Spain, managed to shoot “the king of its territory” from his hide set up in his father’s car.

Lasse Kurkela, from Finland, used pieces of cheese to get Siberian jays accustomed to his remotely controlled camera and to encourage them to follow a particular flight path so he could get the exact shot he wanted – one of the birds high in the sky, tiny against the forest trees.