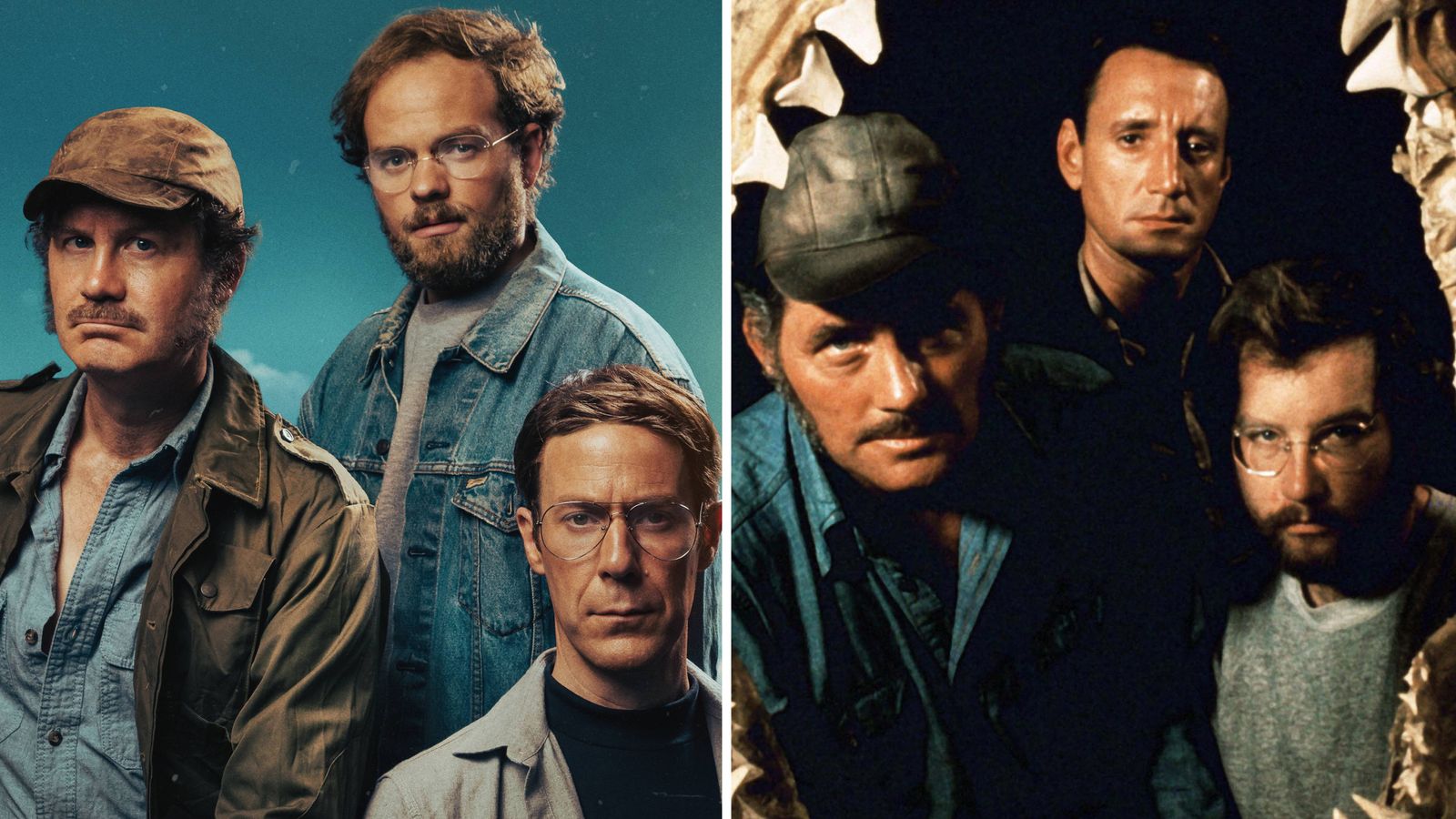 Jaws is one of the cinematic greats.

And while things looked great on the screen, behind the scenes, the lead actors were trapped in an infamous feud – the subject of a new West End play.

For the uninitiated, Jaws is set in the beach town of Amity Island, and kicks off when a young woman heads out for a swim in the ocean.

But chaos ensues when she is brutally attacked and her remains are dumped on the shore.

After lengthy discussions (and another death in plain view of the beach), the blame is placed at the fins of a huge shark, and a bounty is placed on it.

It was on this boat, The Orca, that the actors, who weren’t exactly the best of friends, were forced into close quarters during a pause in shooting due to the lousy weather out at sea and a mechanical, toothy co-star that refused to play ball.

Image: Like father like son – Robert Shaw is being played by his son, Ian. Pics: Universal/Kobal/Shutterstock & Helen Maybanks

It’s also where play The Shark Is Broken begins.

“It’s kind of gone into legend really, because the difficulties they had with the mechanical shark were extensive,” Ian Shaw told Sky News – the show’s co-writer who also stars as his father, Robert.

“These three actors, with very distinctive personalities and at different stages in their careers, were kind of stuck together.

“We all know what it’s like to be in confined spaces, you know? And with different personalities, there can be quite a clash, and there certainly was between Richard Dreyfuss and Robert Shaw.

“My father was an established actor, had seen it all and was also a distinguished writer – I think that him and Richard just didn’t get on, but Richard does say that on occasion, in private, that they did.

“So then it’s interesting as to whether my father was doing it partly to get a better performance out of Richard.”

The warring on set is almost as famous as the film itself, and added to the production’s woes – it was had gone way over budget and filming took three times longer than scheduled.

“I think there was a little bit of edge in real life between Robert and Richard, and that does show on the screen,” Shaw added.

So what is it like having a combination of your father, a block-busting classic film, and a legendary actors’ feud as source material?

“I didn’t want to do it initially,” Shaw admitted.

“When I first mooted the idea, which I thought was possibly a good idea, I thought ‘I’m studiously trying to avoid association with my father in the first place’, and then to write something about my dad, which might not show him in his greatest light was a concern.

“I felt very reluctant to to engage upon it. But I do think it’s a good story.

Image: Shooting was stalled in the film thanks to some problems with a mechanical co-star… Pic: Helen Maybanks

“I think that as we (Shaw, with fellow writer Joseph Nixon) were going through the process, we found that it became a bit more universal. One of the themes is fathers and sons, which they all talk about in in the play, and then it stopped being about me and my dad, and it started to become more of a conversation about fathers and sons in general – so that put me at ease.”

In The Shark Is Broken, The Orca is just as much as part of the story as the feuding thespians, with the challenge to bring the vessel to stage given to Duncan Henderson.

The boat (of “you’re gonna need a bigger boat” fame) features heavily in the latter part of Jaws, but thanks to some creative license, in the play it is the only location – and where the stars began to bare their teeth, fuelled by booze and ambition.

It’s an impressive structure sat on the stage of London’s Ambassadors Theatre, with a small cabin, a table and a collection of seafaring trash that the group would have ended up with on their travels.

Image: The Orca becomes the setting for the London play. Pic: Helen Maybanks

“We wanted the boat, we wanted more than just the cabin and we wanted to get it as rich as possible,” Henderson explained to Sky News.

“We stuff the forward cabin full of detritus from the film… they’re all questioning their self-worth in their various ways, their value to the world and their value to the film industry specifically, so if we are packing them to the gunnels with all this detritus, it’s more likely to increase this sense of claustrophobia.”

It’s important to say The Orca in the stage play, is different to The Orca in the film – which underlines a point the creative team wants to make: this isn’t Jaws on stage.

Henderson says: “Our experience at the Edinburgh Festival (where the play first ran) was that some of the people in the audience are there because they just love the film and they really want to see what we’ve done, but there are also people there that love human beings, and they want to see the nature of that playing out and everything in between.

“Film fans generally love seeing a little bit of behind the scenes of the friction between [the actors], so it caters for everyone, this particular thing and it’s not exact.”

Shaw adds: “It doesn’t require a watching of Jaws.

“It’s a comedy, first and foremost… I think it’s on occasion moving, but predominantly it is a comedy – so I think audiences will hopefully laugh and be entertained and stimulated.”

The Shark Is Broken runs until January at the Ambassadors Theatre in London, with tickets available now.