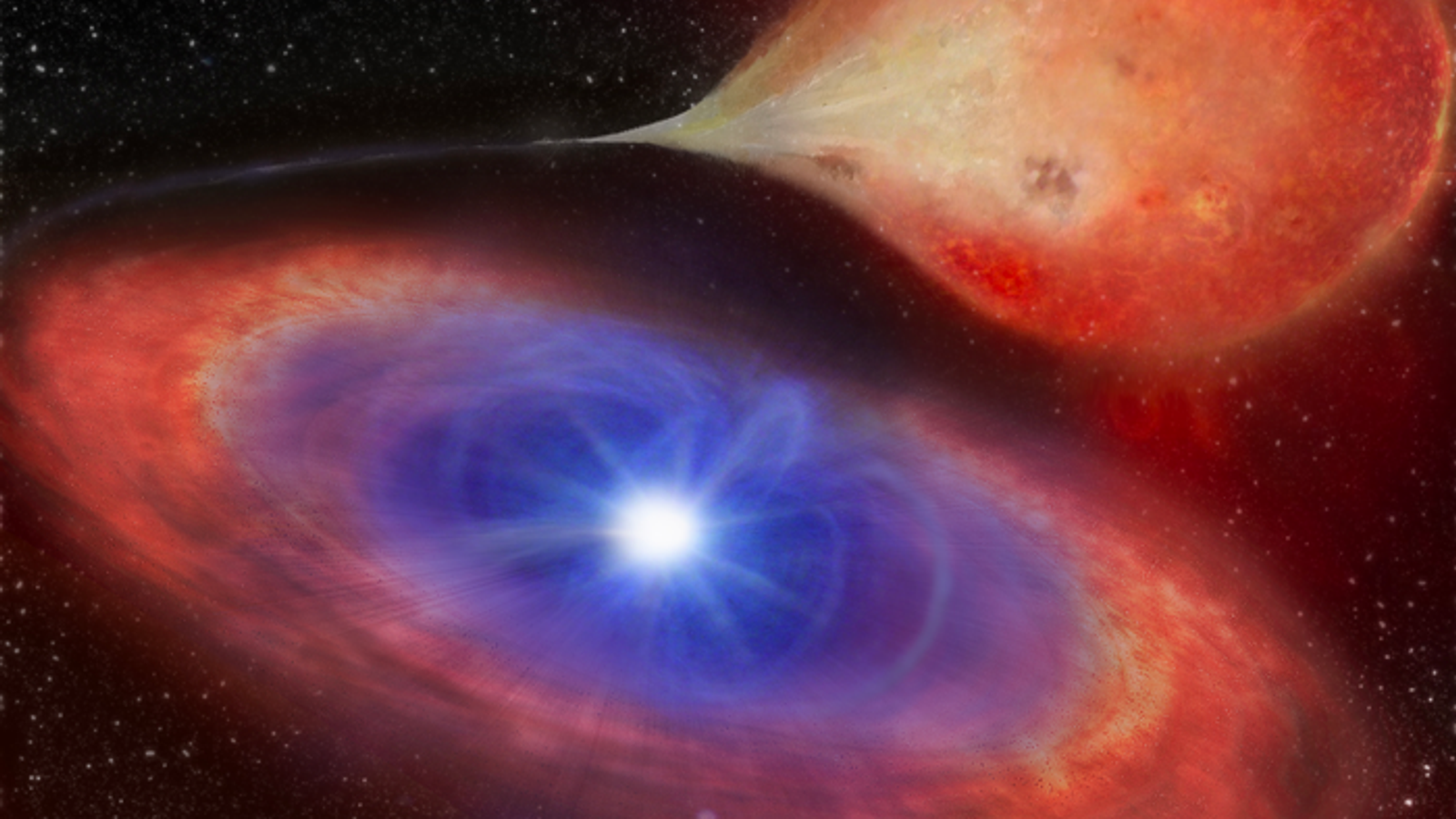 Astronomers have discovered a new cosmic phenomenon in which a white dwarf star has been switching “off and on”, with its brightness dipping and strengthening in just 30 minutes.

The discovery was based on observations from a NASA satellite searching for alien planets, and described as “extraordinary” by a team of astronomers at Durham University and their partners across the world.

Initially they believed the fluctuations were something that was interfering with the way the white dwarf, which is part of a binary system, was feeding from a companion star – but they did not expect the cause to be as unique as it turned out to be.

As the flow of material from a donor star to the main white dwarf is governed by gravity it should remain relatively constant, so there was no obvious reason why the star’s luminosity would change on such short timescales as were being seen.

The researchers realised what was happening was something that had never been seen before – repeated and rapid reconfigurations of the white dwarf’s surface magnetic field.

The binary system known as TW Pictoris is about 1,400 light years away from Earth.

Normally, when its white dwarf is “on”, the star feeds from its companion, glowing brightly into space – but sometimes this stops and the star dims, turning “off”.

This has been seen before, but it does not usually happen so quickly.

According to the research published in the journal Nature Astronomy, the reason is because the white dwarf has an unusually fast magnetic field which is spinning so rapidly that it blocks the stream of matter from reaching the main star.

“To see the brightness of TW Pictoris plummet in 30 minutes is in itself extraordinary as it has never been seen in other accreting white dwarfs,” he said.

Dr Scaringi explained to Sky News: “In general the accretion process in accreting white dwarfs is relatively smooth and does not have any short-term ‘gaps’ in brightness variations.

“What generally happens in these types of systems is that the donor star in orbit around the white dwarf keeps feeding the accretion disk.

“It is known that in some systems the donor stars stops feeding the disk,” he added, although he noted scientists have not yet figured out why this happens, but when it does the disk remains bright for a while as the star “drains” the material that was previously there.

“It then takes the disk about one to two months to drain most of the material, something we saw happen in different accreting white dwarfs,” Dr Scaringi explained.

“Once the amount of material has nearly drained out entirely, this is when so-called ‘magnetic-gating’ acts: the spinning magnetospheric barrier of the white dwarf prevents left-over disk material from simply accreting smoothly, but instead regulates the amount that lands onto the white dwarf in ‘fits and starts’.

“As it takes months to drain a disk out, seeing TW Pictoris drop in brightness in 30 mins was totally unexpected,” he added.

“What we think may be happening in TW Pictoris is that instead of the disk being drained out so fast, we are seeing some sort of reconfiguration of the white dwarf magnetic field, which promptly pushes the inner-disk edge outwards, and thus makes it fainter for some time until the disk is able to push back once again,” he explained.

“This really is a previously unrecognised phenomenon,” Dr Scaringi said.

“Because we can draw comparisons with similar behaviour in the much smaller neutron stars it could be an important step in helping us to better understand the process of how other accreting objects feed on the material that surrounds them and the important role of magnetic fields in this process.”

Gracie Spinks: Woman killed after making stalking complaint was ‘let down’ by police, her family says