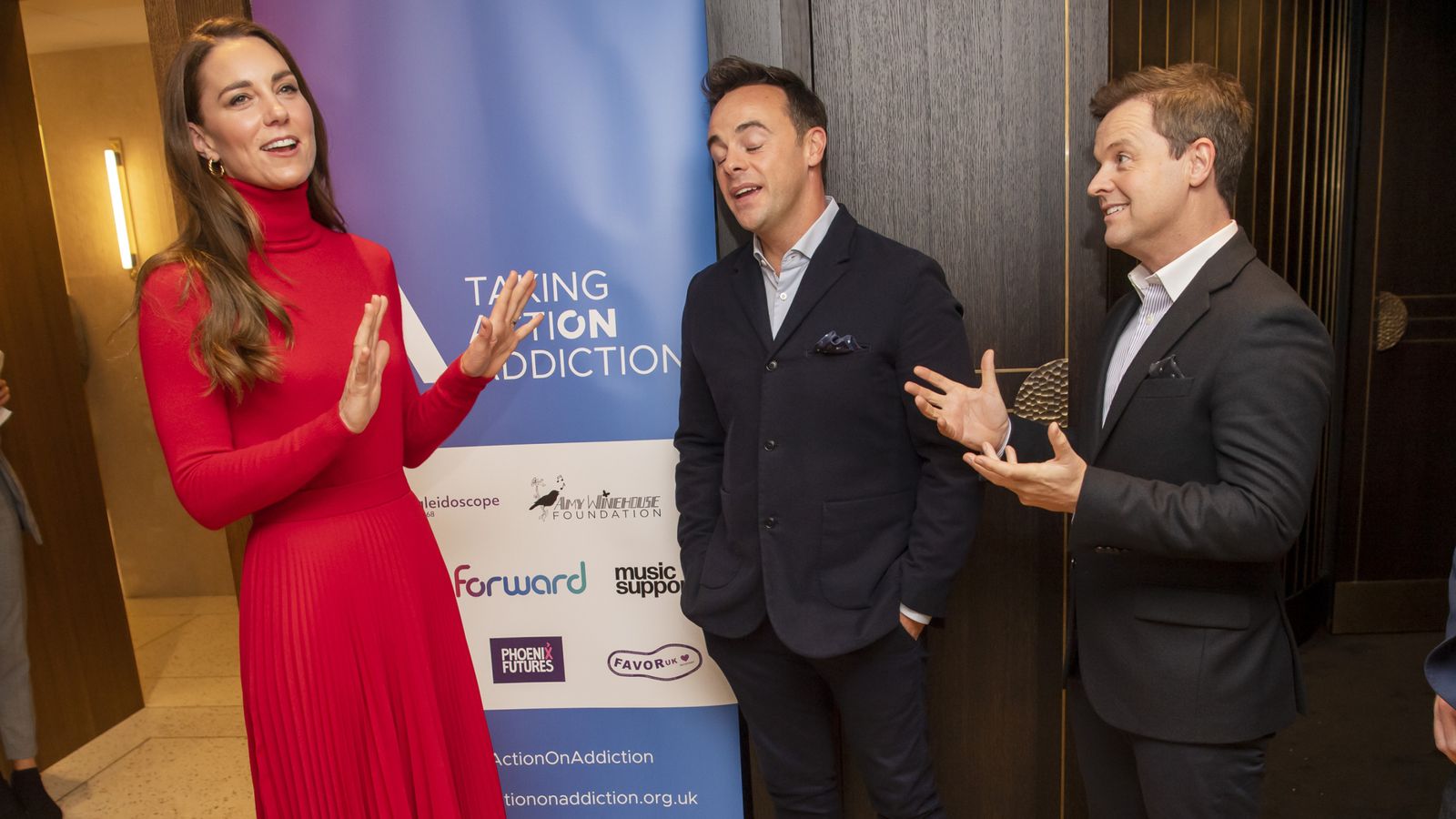 The Duchess of Cambridge has spoken to television presenters Ant and Dec about the stigma around addiction at the launch of a new campaign.

In a very frank and open conversation with Ant McPartlin and Declan Donnelly, Kate said: “Post-lockdown, looking at the stats it’s really worrying what families are going through.

“Even hearing some of the stories today, there’s that feeling that you have to carry that secret alone and actually once you start sharing your stories, people have either experienced it themselves or know someone that’s gone through addiction.”

Image: The Duchess of Cambridge is patron of the charity

McPartlin, who struggled with a two-year addiction to super-strength painkillers following a knee operation in 2015, said: “I found that myself. By the time I asked for help, it was bad, but as soon as you opened up to people, the problems start to disappear. It gets better and help is there.”

He crashed his car in 2018 while more than twice the alcohol limit, before entering rehab.

Donnelly added: “You hear from so many people that things didn’t change until they hit rock bottom, and if we can stop people hitting rock bottom, wherever that is, and get the help much earlier it would make such a difference.”

The meeting happened at an event hosted by the Forward Trust, of which Kate is patron, to launch the charity’s “Taking Action on Addiction” campaign.

Coinciding with Addiction Awareness Week, they want to improve awareness and understanding of addiction, its causes and scale in society to enable more people to ask for and receive help.

During her speech, Kate stressed the importance of tackling misunderstanding surrounding addiction and its roots in early childhood experiences.

“Addiction is not a choice,” she said. “No one chooses to become an addict. But it can happen to any one of us.

“None of us are immune. Yet it’s all too rarely discussed as a serious mental health condition. And seldom do we take the time to uncover and fully understand its fundamental root causes.

“The journey towards addiction is often multi-layered and complex. But, by recognising what lies beneath addiction, we can help remove the taboo and shame that sadly surrounds it.”

The Duchess of Cambridge has worked with addiction charities for the past 10 years. It was through that work that she wanted to learn more about the links between addiction and childhood experience.

Focusing on support for children in their early years and parents has become a main part of her charitable work.

In a lighter moment at the event Kate was slightly caught out. Walking around a corner she jumped as she was surprised to see McPartlin, Donnelly and singer Tom Walker waiting for her, before she joked that she hoped they weren’t there to make her do some kind of bushtucker trial.

During the event, Donnelly also accidentally called Kate “her majesty” before joking that he’d promoted her early.

Image: Ant talked to the royal about his own experiences of addiction

Kate became patron of the Forward Trust in June when the charity merged with Action on Addiction, which was one of her first patronages after she got married.

The two charities decided to join together because of the increased demand for help arising from lockdowns during the COVID-19 pandemic.

Over 60 cross-party MPs and members of the House of Lords have written an open letter to the Prime Minister calling for increased funding for addiction and recovery services ahead of the Comprehensive Spending Review due next week to tackle the “addiction crisis”.

Labour MP for Liverpool Walton Dan Carden, who is now in his third year of recovery from alcohol addiction, has partnered with the Forward Trust to ask Boris Johnson to guarantee the full additional investment of £1.78bn over five years, as set out by Dame Carol Black’s Independent Review of Drugs, to properly fund addiction services.