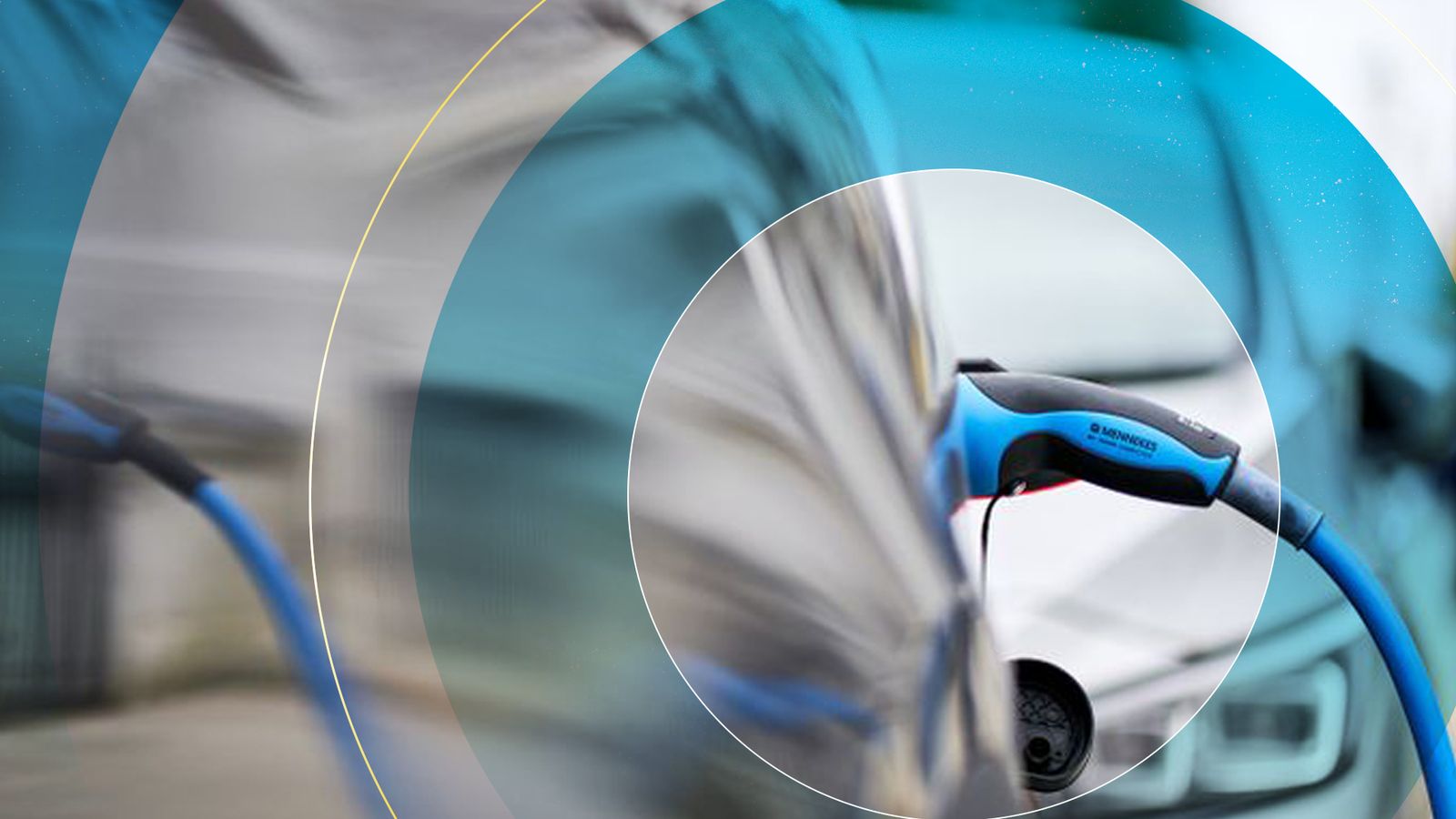 The government’s net zero strategy will “support up to 440,000 jobs” by 2030, a business minister has said – as he announced a move towards the end of the sale of new petrol and diesel cars.

The new plan, published on Tuesday, has the intention of dramatically reducing greenhouse gas emissions to reach the government’s aim of net zero by 2050.

It comes less than two weeks before world leaders will meet at the COP26 climate summit in Glasgow to discuss how to reduce the effects of climate change.

Image: It is the government’s “ambition” that no gas boilers will be sold by 2035

Making a statement on the government’s aims in the Commons, Greg Hands told MPs the strategy “is not just an environmental transition, it represents an important economic change too”.

But Greenpeace UK’s head of politics, Rebecca Newsom, described the government’s strategy as “more like a pick and mix than the substantial meal that we need to reach net zero”.

Announcements in the strategy include:

• An aim to fully decarbonise the power system by 2035

A review published by the Treasury says “the costs of global inaction significantly outweigh the costs of action” to tackle climate change.

The document, released alongside the government’s net zero strategy, says it is not possible to forecast how individual household finances will be hit over the course of a 30-year transition to net zero greenhouse gas emissions.

Image: Ministers have set a target of 40GW of offshore wind by 2030

However, the Treasury document did warn of possible new taxes to fund increased government spending – as well as to make up for a blackhole in lost revenues from levies such as fuel duty – and the possibility of entire industries being wiped out.

But the review also stated that “new, lower-carbon industries and jobs will emerge”.

And Mr Hands told the Commons the net zero strategy will see the UK government fully embracing the “green industrial revolution” and will help the UK “to level up” and “get to the front of the global race to go green”.

“We need to capitalise on this to ensure British industries and workers benefit,” he said.

“I can therefore announce that the strategy will support up to 440,000 jobs across sectors and across all parts of the UK in 2030.”

Mr Hands continued: “This strategy will harness the power of the private sector, giving businesses and industry the certainty they need to invest and grow in the UK to make the UK home to new ambitious projects.

“The policies and spending brought forward in the strategy along with regulations will leverage up to £90 billion of private investment by 2030 levelling up our former industrial heartlands.”

The business minister, who is in charge of the energy brief, told MPs that switching to cleaner sources of energy will reduce Britain’s reliance on fossil fuels and will “bring down costs down the line”.

Mr Hands added that the government “will also introduce a zero emission vehicle mandate that will deliver our 2030 commitment to end the sale of new petrol and diesel cars”.

In strategy documents released on Tuesday, the government says it will invest £620m in grants for electric vehicles and street charging points.

Ministers are also promising an additional £350m to help the automotive supply chain transition to electric.

Vehicle manufacturers will also be made to sell a proportion of clean cars every year, the plans also reveal.

And the government is also planning to consult on whether it is appropriate to prevent new-build homes from connecting to the gas grid in England from 2025.

Image: The government say they want half of journeys in towns and cities to be cycled or walked by 2030

In the foreword to the strategy, Prime Minister Boris Johnson insists the government’s targets can be achieved without giving up flying abroad or driving cars.

“In 2050, we will still be driving cars, flying planes and heating our homes, but our cars will be electric gliding silently around our cities, our planes will be zero emission allowing us to fly guilt-free, and our homes will be heated by cheap reliable power drawn from the winds of the North Sea,” he writes.

“The estate is heated by energy-efficient boilers and we are looking to introduce heat pumps to go even further as part of our net zero ambitions,” the spokesman said.

“Until the policy and funding gaps are closed, Boris Johnson’s plea to other countries to deliver on their promises at the global climate conference next month will be easy to ignore.”

Carrot and sticks in government strategy – but important details missing too

On the face of it you could easily dismiss today’s net zero strategy as being far too little, far too late.

The press release boasts of “mobilising” £26bn of government investment since last year for carbon reduction.

But according to the Committee on Climate Change – which sets the UK’s legally binding climate budgets – about a trillion pounds of investment is needed between 2030 and 2050 to get the UK economy to net zero by 2050.

Not exactly an impressive start.

But the government hopes that public money – grants for heat pumps or electric cars, for example – will generate a market for those products that gets businesses to sell us those products as cheaply as their fossil fuelled predecessors.

It worked to radically reduce the cost of solar power and offshore wind. But if the public money is carrots, the strategy contains sticks too.

Proposals for a “market mechanism” to drive down emissions and “carbon pricing” are ways of putting a cost on carbon that will make it unaffordable for businesses to continue to rely heavily on fossil fuels.

Regulations too – on boiler manufacturers and the building industry for example – are powerful levers it looks like the government is getting prepared to pull.

But important details are missing.

There’s little mention of how our diets need to change to get to net zero.

There’s nothing on how to reduce the massive carbon footprint of the tiny minority of people who take the majority of highly polluting flights – save some new money to develop green aviation fuel.

Also absent is any mention of how government will enable local authroties to manage the net zero transition.

It’s they after all, not central government, that has to organise electrified transport plans, low carbon planning decisions, and drag much of our social housing into the 21st century.

Some things are in other forthcoming strategies, others are being consulted on.

But there’s very little time left for that if we’re serious about avoiding two degrees of warming let alone the 1.5 our strategy is trying to help prevent.

Shadow energy secretary Ed Miliband said the plan “falls short on delivery” and that “there is nothing like the commitment we believe is required”.

He added: “The chancellor’s fingerprints are all over these documents and not in a good way. So we’ve waited months for the heat and buildings strategy – it is a massive let down.”

The Commons Environmental Audit Committee suggests the strategy is “yet to meet the ambition” on heat pumps.

“As yet, there is little acknowledgment that effective use of heat pumps requires buildings to be properly insulated. Our Committee’s evidence highlighted that insulation costs can double the current cost of a heat pump for many of the19 million homes that are older and have an EPC rating of less than C,” the committee’s Conservative chairman Philip Dunne said.

He added: “But we need a more ambitious response from the chancellor at the spending review to turn these promises into jobs, growth and benefits to consumers – and if the government truly wants to level up the country, we’ll need much more investment once the dust has settled on the COP26 Glasgow climate summit.”

Image: Energy minister Greg Hands said the strategy will help the UK ‘get to the front of the global race to go green’

“We’re at a critical stage in the journey where net zero is possible with the technologies and opportunities we have today and, in order to deliver on this, we have to accelerate and ramp up efforts to deploy long-term solutions at scale,” he said.

Meanwhile, Bob Ward, director of policy and communications at LSE’s Grantham Research Institute on Climate Change and the Environment, said “it remains to be seen whether the scale and ambition of the strategy is sufficient to attract the private investments necessary to realise a credible pathway to net zero by 2050”.