The Beano exhibition: Why the ‘hidden hand’ comic behind British culture is finally getting its time in the arts spotlight 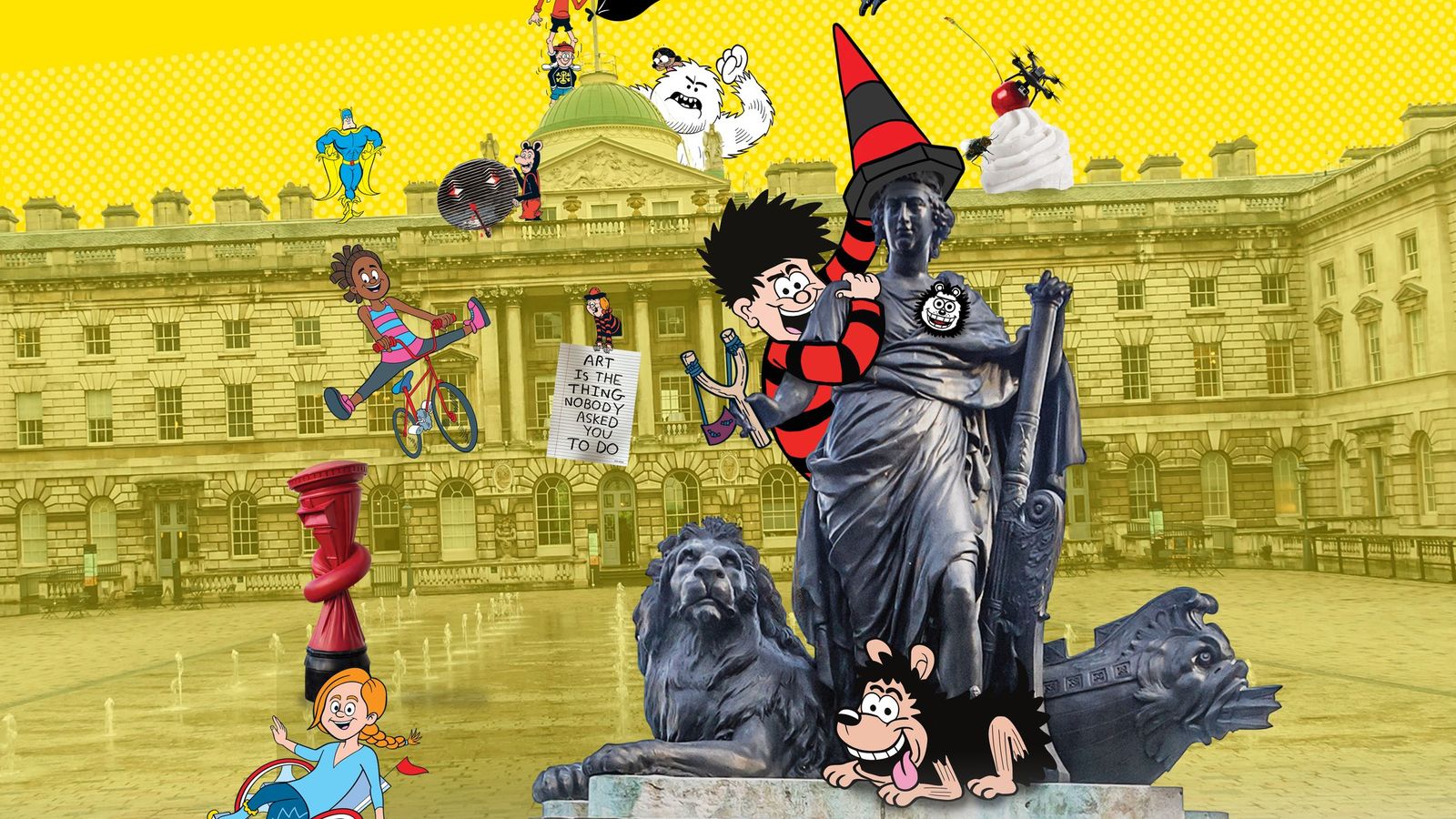 For its first major installation post-lockdown, this august building in central London celebrates something more garish – the antics of Dennis the Menace, Minnie the Minx, Roger the Dodger, Bananaman, Lord Snooty and Billy Whizz.

A few decades ago, every newsagent in the UK and Ireland was dominated by comics – including Dandy, Whizzer & Chips, Beezer, Hotspur and Victor.

They were a massive influence on the lives of children for decades… and then they were gone.

All apart from the best – the Beano – still read weekly by thousands.

The Art Of Breaking The Rules exhibition identifies what its curator Andy Holden calls Beano’s “hidden hand” behind British culture for over 80 years.

This is no nostalgia show: original artwork is side by side with later work inspired by the comic or its ideas by artists such as Gilbert and George, Steve Bell and Nick Park. Installations are immersive; you can sit at Bash Street School desks, or select sounds from a jukebox filled with music embodying a sense of anarchy selected by Bob Stanley of Saint Etienne.

It’s a warm and fascinating exhibition, and what’s interesting is how unusual it is for the arts establishment to excavate our indigenous comics’ heritage like this. Illustrators such as Leo Baxendale, Dudley Watkins and Ken Reid, all of them almost completely anonymous, week after week formed the mental furniture of generations of children.

It’s an impact almost never acknowledged (although David Bowie famously said the Beano was one of the most influential publications of his life).

Image: The Art Of Breaking The Rules, on at Somerset House, features original artwork alonside new pieces inspired by the comic

Their impact is hard to pin down. Baxendale, creator of the Bash Street Kids, was a left-wing activist who saw his characters as heroes of anarchy; the comic’s publisher DC Thomson in Dundee is sometimes associated with solid small-town conservative values, within which juvenile rebellion can be contained.

It’s a tension Holden says he has wrestled with: “It is a hard legacy to process. There are some misconceptions about identification – children don’t identify with characters so much as read it as a whole.”

Whatever the Beano’s impact, part of the secret of its longevity is adaptation to modern Britain. In the past, transgression was punished by a swinging slipper on a child’s behind. That’s now long gone – though it has a vestigial ghost in the name of Beanotown’s policeman, Sgt Slipper.

During the pandemic, some strips addressed children’s anxieties over the strangeness of lockdown. And Beanotown’s citizens are now multiracial: the exhibition is frank in addressing previous racial stereotypes – even if, as in the case of Little Plum (“your redskin chum”), the sentiments behind it were progressive. In one part of the exhibition, artist Rene Matic imagines Dennis the Menace as a black boy, always seen as trouble before he’s done anything wrong.

Like the Beano itself, this exhibition aims to be exhilarating for kids, yet has enough subtle and allusive layers to satisfy the most modish art fan.

What it hopefully will achieve is to make more mainstream a rediscovery of comics, Britain’s great unheralded working-class art form.

The Beano: The Art Of Breaking The Rules exhibition is on now at Somerset House