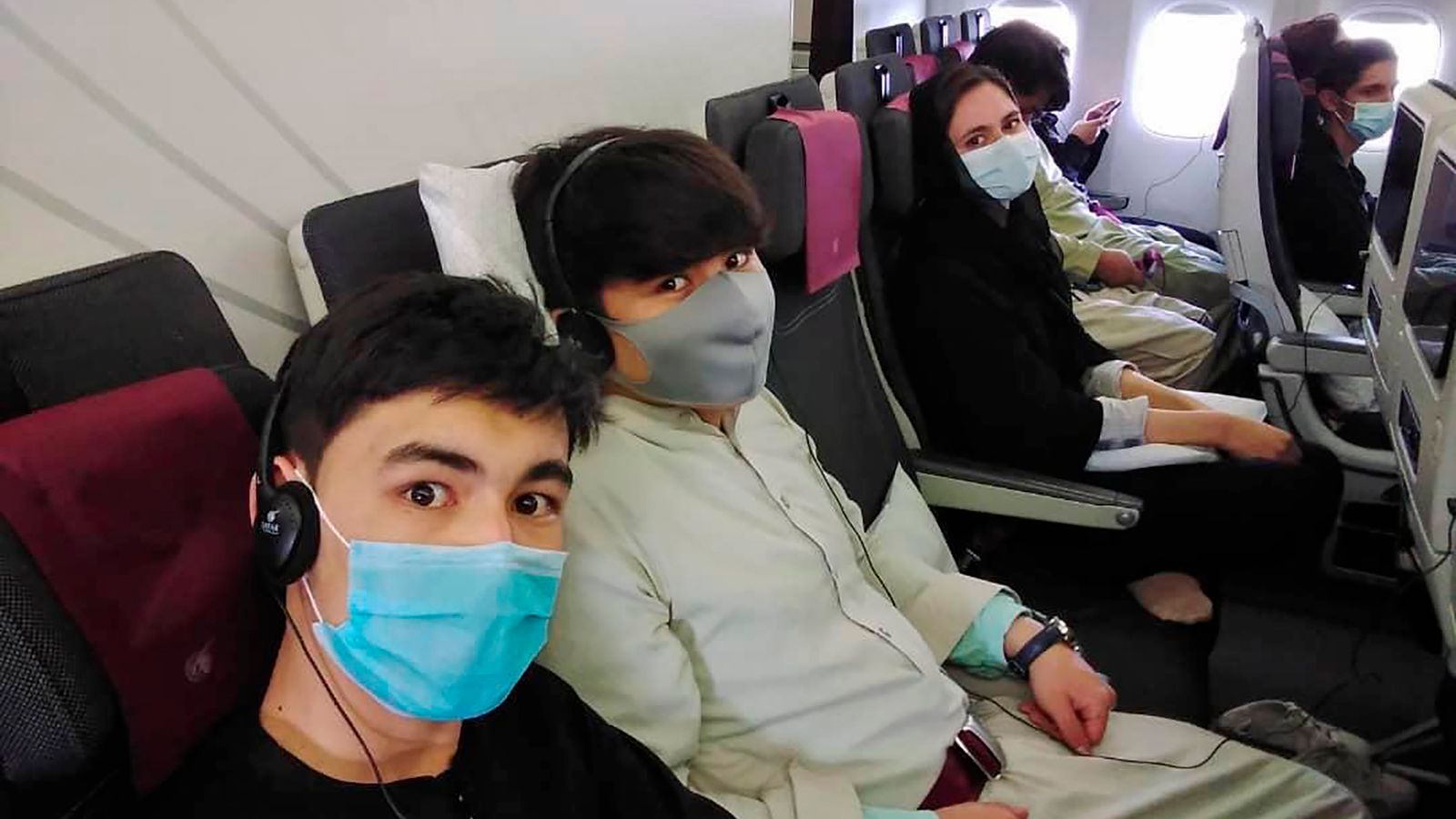 “Afghanistan was a silent country, a silenced nation,” says Ahmad Sarmast, founder and director of the country’s National Institute of Music. “And the same is happening again today.”

Having spent more than a decade encouraging and nurturing the talents of hundreds of children and young people during a period when the country’s music scene was able to flourish, Dr Sarmast can now only watch as creativity is effectively wiped out, he says, in the wake of the Taliban’s takeover.

He is now using his position to help those looking to flee the country; more than 100 students, staff and some family members were granted asylum in Portugal and evacuated earlier in October. But there are dozens more left behind, and Dr Sarmast is working to help them get the correct documentation to leave.

Image: The Afghanistan National Institute of Music campuses have been guarded since the Taliban takeover, and instruments have been locked away (pictured below). Pics: AP/September 2021

The last time the Taliban ruled Afghanistan, before the US-led invasion in response to 9/11 in 2001, music was banned outright. After 20 years, it took a matter of days for Kabul to fall to the militant group in August 2021. Two months on, while the new leaders haven’t taken that step officially yet, some Taliban fighters have been enforcing their own rules. Musicians fear a formal ban could come.

The institute (ANIM), founded by Dr Sarmast in 2010, emerged then as the face of a new Afghanistan, performing to packed audiences in the US and Europe. Now its classrooms are empty, its campuses guarded by fighters from the Haqqani network, an ally of the Taliban considered a terrorist group by the US.

What does the future for music and the arts look like under Taliban rule in Afghanistan?

“This is a terror group which exploded and destroyed the two largest Buddhas of Afghanistan, part of the cultural heritage,” Dr Sarmast tells Sky News over Zoom from Doha. “A group which in a systematic manner destroyed hundreds and thousands of artefacts in the Museum of Afghanistan. A group who have been destroying musical instruments, hanging musical instruments as a symbol of their repression on the streets of Kabul. A group under whose reign and regime the people of Afghanistan were silenced.”

Officially, the US and UK do not currently designate the Afghan Taliban a proscribed terror organisation, but attempts are under way in America to get the group banned and it is on a list of people and organisations that have had assets blocked because of their association with terrorism. However, the Haqqani network – several members of which are in the new Afghan government – is a proscribed organisation by the US, and other Taliban cabinet members have had sanctions imposed by the US and UN against them, because of their earlier involvement with al Qaeda.

Dr Sarmast paints a grim picture of what is happening at the moment and says the Taliban has not changed, despite their assurances to the rest of the world. “The situation in Afghanistan is very unpredictable,” he says. “The Taliban are beginning to show their real face and all this propaganda… it’s not true.”

Image: The institute, founded by Dr Ahmad Sarmast in 2010, emerged as the face of a new Afghanistan. Now, it stands empty. Pic: ANIM

“My students, my faculty, my staff are not allowed to go back,” he says. “And the musical instruments of my school – currently, the instrumental libraries are intact but we don’t have access to them. I don’t know how long those will be intact.

“At this time, Taliban are behaving very smartly and very strategically. They’re imposing the same restrictions, the same banning that they imposed during their first reign. But this time, instead of immediately announcing that music is banned, they are pushing it slowly.

“Musicians are in a very critical situation. They’re practically losing their living. Right now, many musicians in Afghanistan are facing starvation. Their only source of income was to make a living through live performances in weddings, on radio and TV stations, and that’s [been] taken away.”

Dr Sarmast says he has to prioritise ANIM students. “After this process is complete, I might be in a position to consider too how I can help the rest of the Afghan musicians. But some Western countries are not receiving refugees right now.

“The situation on the ground is extremely dangerous, not only for musicians, but generally for activists of civil society, artists, painters, journalists, human rights activists. The situation for the women of Afghanistan is worse. They’ve been denied rights to work, rights to education, rights to be part of social and political life of the country.”

People from ethnic minority groups such as the Hazara and Panjshiri communities are also at risk, he says, as well as those who worked for the overthrown previous government.

“There’s no national amnesty. Taliban do not have control over their forces. Everyone has their own rules and regulations and especially when it comes to outside Kabul, people are extremely in a fragile position.”

On Friday, several world-renowned classical musicians will be taking part in the Concert For Afghanistan event organised by violinist Enrico Alvares in collaboration with the International Rescue Committee (IRC), which will be live-streamed from St James’s Church in central London. It will raise funds and awareness, but also sends a message.

“The response when I contacted people was so great,” says Alvares. “There are many more who wanted to play than I could fit in. So there is solidarity between musicians here and I’m sure around the world, it is very strong.”

Dr Sarmast says he is planning to re-establish his institute outside of the country and that he does not want Afghanistan’s musicians to give up hope. “We [want to] give them an opportunity to chase their dreams. That’s what I’m doing right now when I’m working with wonderful people around the globe to get my students out of Afghanistan, it is to give them hope for the future.”

His message to the world is simple: “If we all truly believe that music is a universal language, help us today, save us today – so we can raise our voices again tomorrow.”

Concert For Afghanistan takes place at St James’s Church in Piccadilly, London, at 7.30pm on Friday. It will also be live-streamed globally at concertforafghanistan.com