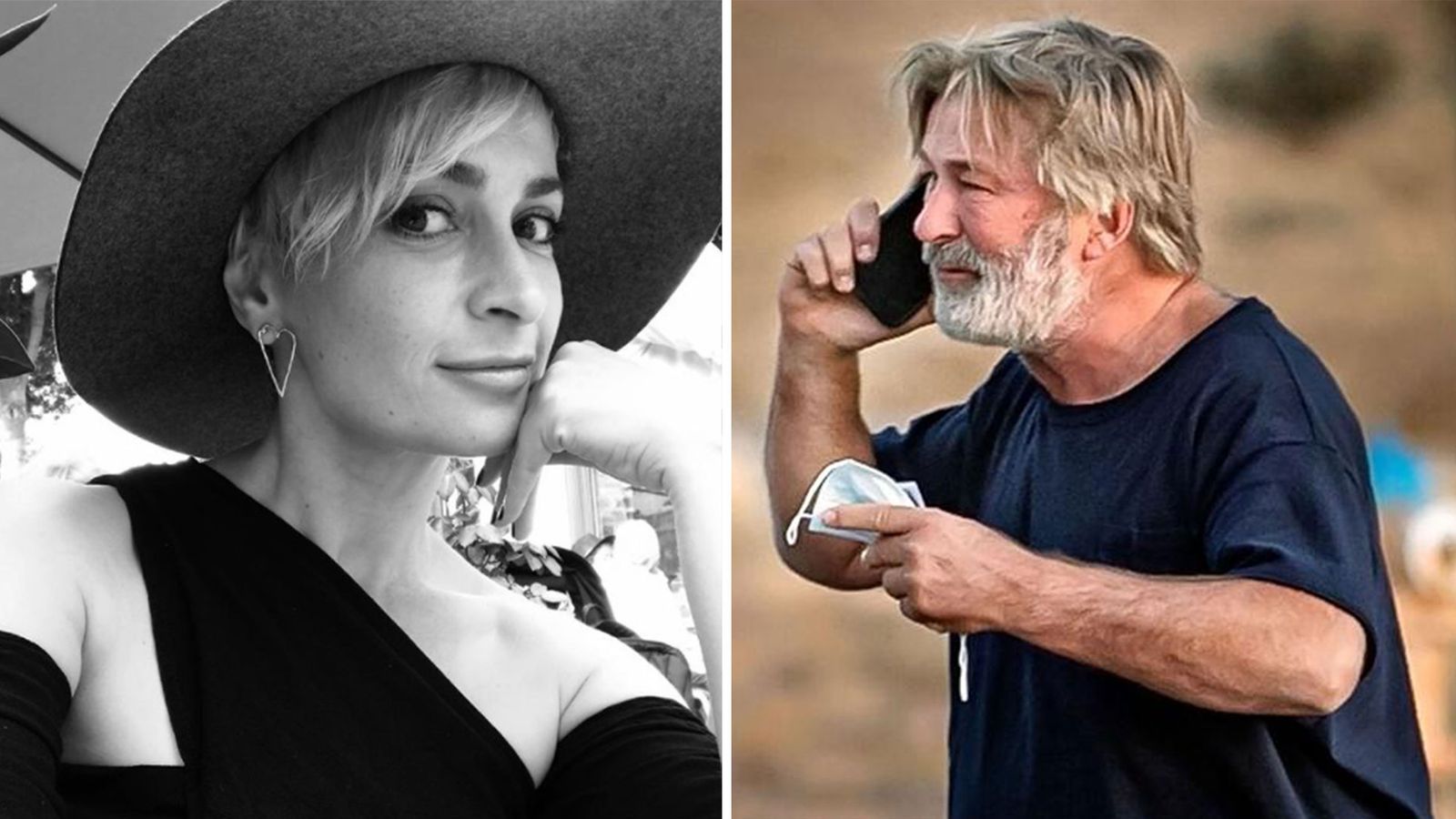 A woman has died and a man has been injured after actor Alec Baldwin discharged a prop firearm on the set of new Western movie Rust.

The woman has been named as Halyna Hutchins, a 42-year-old director of photography, and the injured man is Joel Souza, the film’s director.

Who was Halyna Hutchins? Tributes to ‘brilliant’ cinematographer killed on film set
What other fatal accidents have happened on movie sets?

Hutchins was transported via helicopter to University of New Mexico Hospital, but was later pronounced dead.

Image: Baldwin pictured outside the sheriff’s office after the shooting

Souza was taken by ambulance to Christus St. Vincent Regional Medical Center, but has since been discharged, actress Frances Fisher said.

Mr Baldwin has been questioned by police and a sheriff spokesman said he willingly provided a statement.

Image: Halyna Hutchins was shot on the set of Rust. Pic: @HalynaHutchins via Reuters Image: Writer and Director Joel Souza was treated in hospital

A spokesman for Baldwin, who is producing and starring in the film, said there was an accident involving the misfire of a prop gun with blanks.

Juan Rios, a spokesman for the sheriff’s office, said: “This investigation remains open and active. No charges have been filed in regard to this incident. Witnesses continue to be interviewed by detectives.”

He added that detectives are investigating how and what type of projectile was discharged.

Police responded to the set at the Bonanza Creek Ranch at about 2pm local time, following emergency calls of a person being shot there.

Rust’s production has been halted and the company making the film said it is providing counselling services to everyone connected with it.

Image: In a now-deleted Instagram post from Alec Baldwin, a picture, taken before the incident, shows the actor on the set of Rust

The Santa Fe New Mexican reported that Baldwin, 63, was seen Thursday outside the sheriff’s office in tears but refused to comment.

Hutchins was named a “rising star” by American Cinematographer magazine in 2019 and was director of photography on the 2020 action film Archenemy, starring Joe Manganiello.

“I’m so sad about losing Halyna,” said Archenemy director Adam Egypt Mortimer on Twitter. “And so infuriated that this could happen on a set.

I’m so sad about losing Halyna. And so infuriated that this could happen on a set. She was a brilliant talent who was absolutely committed to art and to film. ️ pic.twitter.com/vcdFqHsGA0

“She was a brilliant talent who was absolutely committed to art and to film.”

Actor Joe Manganiello, who starred in Archenemy, called her “an incredible talent” and “a great person” on his Instagram account, adding that he was lucky to have Hutchins as director of photography on the film.

Director and writer James Gunn, who worked on films such as Guardians of the Galaxy and Slither, said on Twitter: “My greatest fear is that someone will be fatally hurt on one of my sets. I pray this will never happen.

“My heart goes out to all of those affected by the tragedy today on Rust, especially Halyna Hutchins & her family.”

My greatest fear is that someone will be fatally hurt on one of my sets. I pray this will never happen. My heart goes out to all of those affected by the tragedy today on Rust, especially Halyna Hutchins & her family.

Rust, which was due to keep filming until November, is about a 13-year-old boy who is left to fend for himself and his younger brother after his parents’ death in 1800s Kansas, according to the Internet Movie Database.

The teenager is sentenced to hang for accidentally killing a local rancher and goes on the run with his long-estranged grandfather, played by Alec Baldwin.

This is not the first high-profile death involving a prop gun on set.

Brandon Lee, son of the late martial-arts star Bruce Lee, died while filming a death scene for the movie The Crow in 1993, when he was 28 years old.

The .44-caliber weapon used was supposed to fire a blank but an autopsy revealed that a bullet was lodged near his spine.

A Twitter account run by Lee’s sister Shannon said: “Our hearts go out to the family of Halyna Hutchins and to Joel Souza and all involved in the incident on ‘Rust.’ No one should ever be killed by a gun on a film set. Period.”

In 1984, actor Jon-Erik Hexum was pretending to play Russian roulette with a .44 Magnum on the set of the television series Cover Up when he shot himself in the head with a prop gun blank and died.