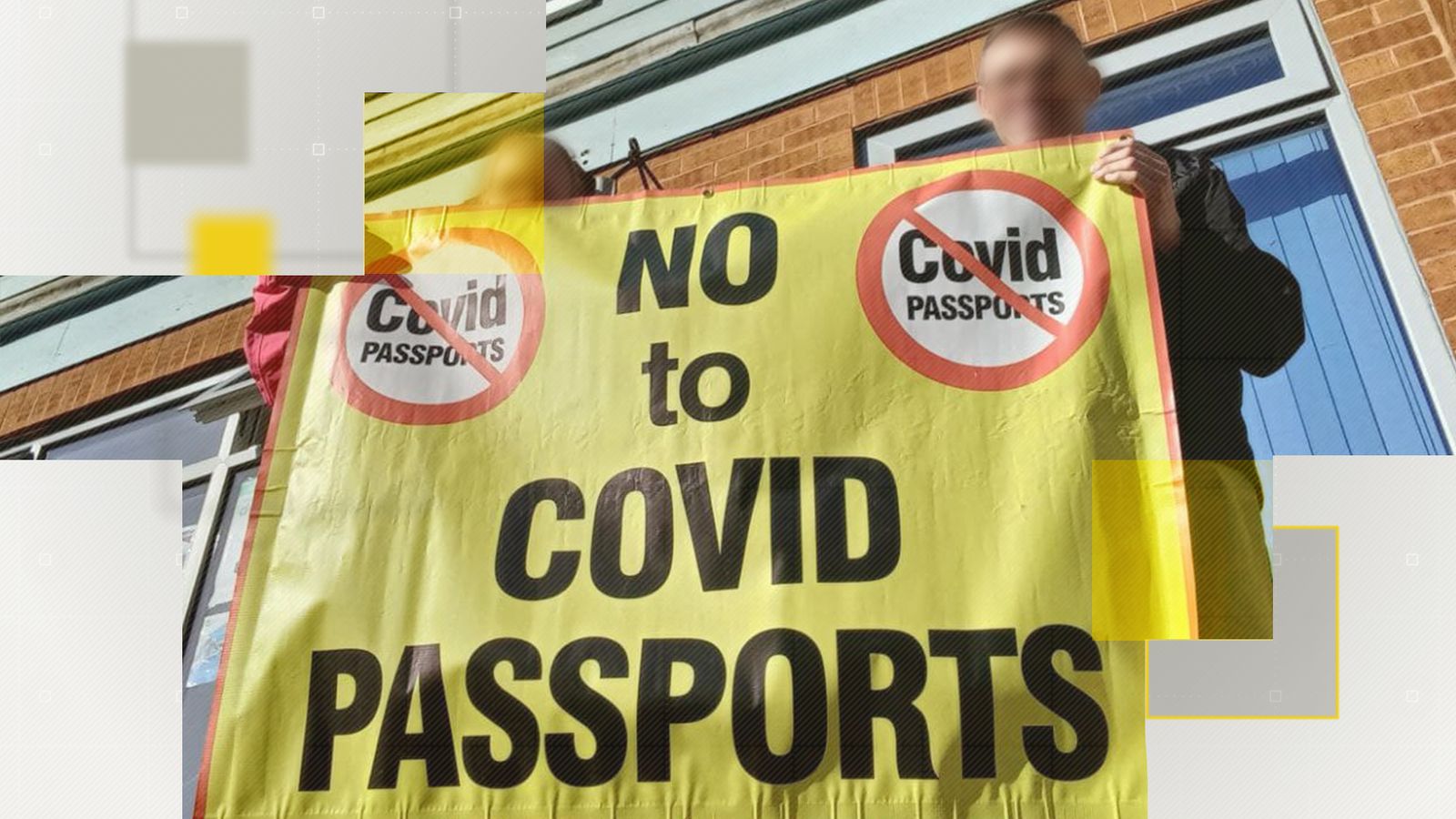 Anti-vaccination and anti-lockdown protesters are organising themselves online to confront MPs in person, Sky News has found.

One online group is going after politicians because of their “evil actions” – and shares tips on how to find constituency offices and MPs’ homes.

Photos and videos of members and other like-minded protesters approaching politicians or their offices are being widely shared on the messaging app Telegram. One video shows an MP revealing he was forced to call the police after his home was targeted by anti-vaxxers.

It comes as concerns around MPs’ safety have risen following the killing of Sir David Amess. The death of the MP for Southend West is being treated as terrorism related and is not thought to be linked to the anti-vax or anti-lockdown movements.

This week, Michael Gove was escorted by police officers after being surrounded by anti-vaccine protesters, while MPs have spoken out about receiving threats and harassment.

At least six groups discussing how to locate and confront MPs were found on Telegram during an investigation by the Sky News Data and Forensics team.

One such group that encourages members to speak in person with MPs and protest outside their offices and homes was set up five months ago. It has already built up around 2,350 members across the UK.

The Telegram channel’s description says the group is a “community outreach movement to make people aware of their MPs evil actions and to target their political seat under pressure or alternatively, replace.”

They say their intention is to confront MPs in a non-violent way.

Image: One group, with around 2,350 members, say they are pressuring MPs because of their ‘evil actions’

They want to convince them of what they believe are the dangers of the coronavirus vaccine. They also seek to prevent any further COVID-related restrictions impacting the UK, in particular lockdowns and vaccine passports.

New users are encouraged to share where they live in the UK and who their local member of parliament is. More than 100 MPs across the country are named – including Sir David.

There are frequent requests for help finding the offices and homes of politicians appearing in the chat.

One such message reads: “How do I find out where Oliver Heald MP lives?!!!”

New users are directed to a publicly accessible business directory where they claim some MPs’ addresses can be found.

Some users who join are enthusiastic but do not know who their MP is.

One user writes: “From Wakefield! Sorry don’t know who is our MP all these idiots are the sane just tell where to go and stand at 2pm please”

One of the MPs the group managed to find and speak to is Chris Heaton-Harris, who represents Daventry.

An hour-long video of around 30 people surrounding the Conservative minister was uploaded on 2 October. The MP has one female aide with him.

The conversation with the crowd has moments where voices are raised against the MP, but is largely calm.

One moment of tension happens after Mr Heaton-Harris refuses to say he would not rule out voting for vaccine passports.

The MP then describes to the group how a person or people attempted to put a large number of stickers protesting against vaccine passports on his house. However, the protesters mistook the MP’s house for his neighbour’s.

He adds: “It’s the first time I’ve ever had to call the police in my time as an MP.”

One member of the crowd responds: “It’s hardly murder.”

Image: Chris Heaton-Harris, a Conservative minister, spoke with a large crowd and asked people not to go to his family home

At the end of the meeting, Mr Heaton-Harris encourages the group to ask questions of him as their MP, but asks them to try to dissuade others from approaching his family home.

Other MPs confronted in person by the group include Labour’s Anneliese Dodds as she walked alone to her party’s conference. She is described in the Telegram group as “treasonous”.

Despite many in the group emphasising the need to keep protests peaceful, some advocate for violence and intimidation.

One user writes: “At this point I feel like ANY kind of disruption is a good thing. We have had peaceful protests for over a year and achieved nothing! I don’t agree with out right abusing people, but the fight is coming Weber you peaceful or not n I want to do my part”.

Accusations and offensive insults are thrown at MPs, from claims of accepting bribes and corruption to calling them “traitorous”.

One user posted a link to an article about how Deputy Prime Minister Dominic Raab shared that he had received violent threats. The user writes: “Scare the MPs so they vote to extend special measures and vote on the security bill.”

The group discussed the death of Sir David on 15 October.

Several conspiracies about the killing are also shared in the group.

A group member writes: “Seems a bit suspicious, now they’re talking about special protection for MPs. Quite a coincidence.”

To which another member replies: “Excalty.. that why we need to serve them all and fast.”

Partially scuppered by many MPs and their staff working from home, the group have continued to turn up at constituency offices in the hope they may run into their local representative.

In early June, the first photo showing a small group of protesters outside an MP’s office was shared in the chat. It was the office of Labour leader Sir Keir Starmer in north London.

Image: Sir Keir Starmer’s office was one of the first locations targeted by those in one of the Telegram groups

The poster wrote: “A picture outside MP Kier Starmers office when a few of us first arrived. We got a great community reception, if we stay persistent they will all know we are there every week! Not a bad start!!”

They added: “The police were good to us too as long as we don’t storm the office, leave rubbish behind, put stickers on it and are peaceful… it’s our democratic right.”

Another user shared a selfie in front of a Scottish MP’s office in Glasgow, while others wrote messages claiming to have gone to other offices.

The most recent photo was shared on 15 October.

This picture showed two people holding up a “No to COVID passports” banner with the office for Lee Rowley, MP for North East Derbyshire, clearly visible in the background.

As well as attempting to confront MPs in person, the group also write to their MPs and create leaflets to encourage others to join them.

Image: One of the Telegram groups created a leaflet to encourage others to join their efforts to ‘take the fight directly to our local MPs’

The group has created local groups, as well as operating alongside other Telegram channels which also encourage people to physically approach MPs.

Videos showing confrontations with MPs – including with the Leader of the House of Commons Jacob Rees-Mogg – are shared in these Telegram groups.

Many of these videos are uploaded to a video hosting site popular with the anti-vaccine community.

Videos shared in the groups or on the video site show MPs Lee Anderson, Chris Grayling and Sir Desmond Swayne also being targeted, as well as the Prime Minister’s father Stanley Johnson. These videos appear to be filmed during the Conservative Party conference.

A number of different videos of Michael Gove being harassed in Westminster this week are also on the site.

The videos are uploaded with comments such as “Throw him to the lions! String him up!”

One comment makes a direct reference to the killing of Sir David, saying: “Whers the boogyman terrorsit now to stab up c***s like GOVE, how they have the brass face to walk the streets is beyond me.”

One short clip of Matt Hancock running in a marathon is also shared on the video site. It is uploaded with the caption: “WHERES THE GUY WITH THE GUN, ARRRRR DAM.”