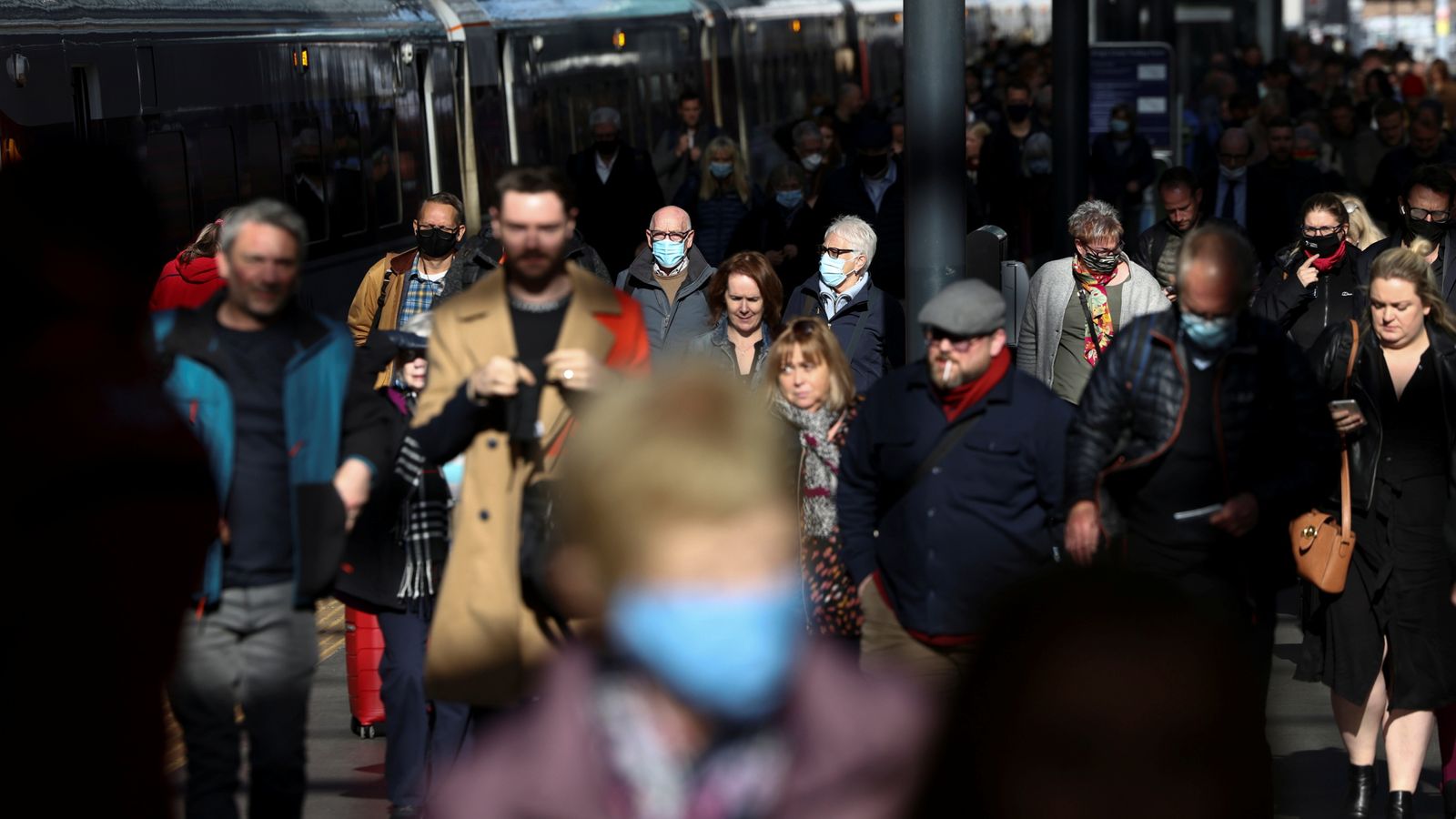 Boris Johnson has admitted the level of COVID cases is “high” and he is “watching the numbers very carefully every day” – but insisted he is “sticking with our plan”.

The government has so far resisted calls to move to Plan B of its autumn and winter COVID response for easing pressures on the NHS.

But a spokesman for the World Health Organisation has warned it’s “not a healthy situation in the UK right now” – and a lecturer in intensive care medicine has told Sky News that waiting for the situation to get worse is no way to handle an emergency.

Javid: No need for ‘Plan B’ yet

Any Plan B for England could include a return to mandatory mask wearing, a return to work from home guidance, or the introduction of coronavirus passports for some venues.

Some within the NHS have called for ministers to move to Plan B immediately after an eighth day in a row that the number of daily infections has been above 40,000.

Health Secretary Sajid Javid this week even predicted there could be as many as 100,000 COVID cases a day heading into winter.

But, asked what level of cases could trigger further action, Mr Johnson on Thursday said he would not yet be bringing in fresh measures.

“We’re watching the numbers very carefully every day,” the prime minister said, during a visit to Northern Ireland.

“You’re absolutely right the number of infections are high. But we’re within the parameters of what the predictions were, what SPI-M and the others said where we would be at this stage given the steps that we’ve taken.

“So we’re sticking with our plan.”

Mr Johnson said the UK was in an “incomparably better” position than 12 months ago due to the “huge level of protection” now provided by COVID vaccines, which mean 90% of the adult population currently have coronavirus antibodies.

But he added the UK needed to “fortify ourselves further” ahead of this winter.

“The numbers are high, we can see what’s happening, we can see the increase, now is the time to get those booster jabs and also to vaccinate the 12 to 15-year-olds as well,” the prime minister said.

In a message to all those eligible for a booster vaccine, including the most vulnerable and all over-50s, Mr Johnson said: “When you get the call, get the jab.”

A media blitz has been launched by the Government encouraging people to take up COVID-19 booster jabs – with adverts set to appear on billboards, TV, radio and social media platforms.

Meanwhile parents can book vaccines for children aged between 12 to years old from this evening – with appointments available as early as the weekend.

Mr Johnson stressed there was “certainly no shortage of supply” of COVID jabs with “huge quantities of vaccine” in the UK.

“Come forward and get it when your time comes – it’s a demand issue and we really urge people to come and do it,” he added.

Earlier on Thursday, former Conservative health secretary Jeremy Hunt urged ministers to consider whether to shorten the time that most people have to wait for a third booster jab from six months to five months after their second dose.

And Mr Johnson did not rule out shortening the time between jabs two and three for most people who are eligible for a booster vaccine, saying it was “an extremely important point”.

“On the issue of timing, all I will say is I think we just need to keep going as fast as possible,” he said.

Labour leader Sir Keir Starmer said it was “wrong” to focus debate on whether the government should enforce Plan B.

He instead urged ministers to “get a grip” on their “failing” Plan A and a “stalling” vaccination programme.

“The government said the vaccine would be the security wall against the virus and now the government is letting that wall crumble,” Sir Keir added.

“We’ve seen those that most need it not able to get the jab they need – only, I think, 17% of children have got the vaccine.

“And the booster programme has slowed down so much that, at this rate, we’re not going to complete it until spring of next year.

“So the government needs to change, it needs to get a grip, I think it needs to drive those numbers up to at least 500,000 vaccines a day.”

Downing Street on Thursday confirmed that, should ministers decide Plan B was necessary, a House of Commons vote would be required to return to the mandatory wearing of face masks or to introduce the use of COVID certification for entry to certain venues.

And Mr Javid later said that a record 234,000 people had booked a booster jab on Wednesday through the National Booking Service.

Dr David Nabarro, the World Health Organisation’s special envoy on COVID-19, told Sky News that it was “not a healthy situation in the UK right now”.

“If I were in a responsible position I’d be asking myself how much longer before we do start to introduce proper mask-wearing mandates,” he said.

“Vaccines are fantastic lifesavers… but on their own they don’t offer what we believe to be sufficient to get this pandemic under control.

Patricia Marquis, England director at the Royal College of Nursing, told Sky News that is was “sensible for us to look at increased mask wearing, social distancing and thinking about large gatherings and whether those are right or not”.

“Further measures about work from home etc. which we know are in Plan B really need to be considered very seriously,” she added.

And Professor Charlotte Summers, a lecturer in intensive care medicine at the University of Cambridge, told Sky News she was “expecting an incredibly challenging winter if we don’t start taking some action now”.

“I’m an intensive care specialist, I deal with emergencies all the time – that’s my job,” she added.

“I’m pretty certain that there is no emergency for which waiting for it to get worse before you take any action is the best way to handle it.”

The pressure is increasing with every new infection but the government says it will not be push the button on Plan B.

The prime minister says his scientific advisors warned him that this is exactly where were we would as we approach winter.

Today we have recorded 50,000 new cases for the first time in three months. Yesterday the health secretary warned that we could see 100,000 cases a day.

But – and here’s the crucial thing as far as Boris Johnson is concerned – we are not, thankfully, seeing the same number of people dying in the way they did during the first and second waves.

The reason is because of the vaccine. And that is why the government will not introduce interventions like compulsory face masks. It wants to move forward.

But health workers say the government has not considered several crucial factors.

Yes, they agree, it is true the vaccine is working to protect people from falling very ill and dying but vaccine immunity may be starting to wane.

They point to Scotland where there is recent data to support this.

Also this winter is going to be the first where we have COVID with flu and other seasonal respiratory illnesses circulating together. A bad winter with just one of these can be devastating enough.

Then there’s the growing waiting list and urgent treatment that has to continue. All this while hospitals give up more bed space and staff to COVID patients.

No surprise then that morale is so low among NHS staff. They are understandably exhausted and dreading what the winter is threatening to bring.

So while they are looking at the bigger picture and the pressure that will bring on the health service, the prime minister may choose to focus on a narrower set of data that tells him it is not as bad right now as it has been.

He accepts this might change very suddenly. We have seen this happen before.

But what senior doctors are asking is, why wait?