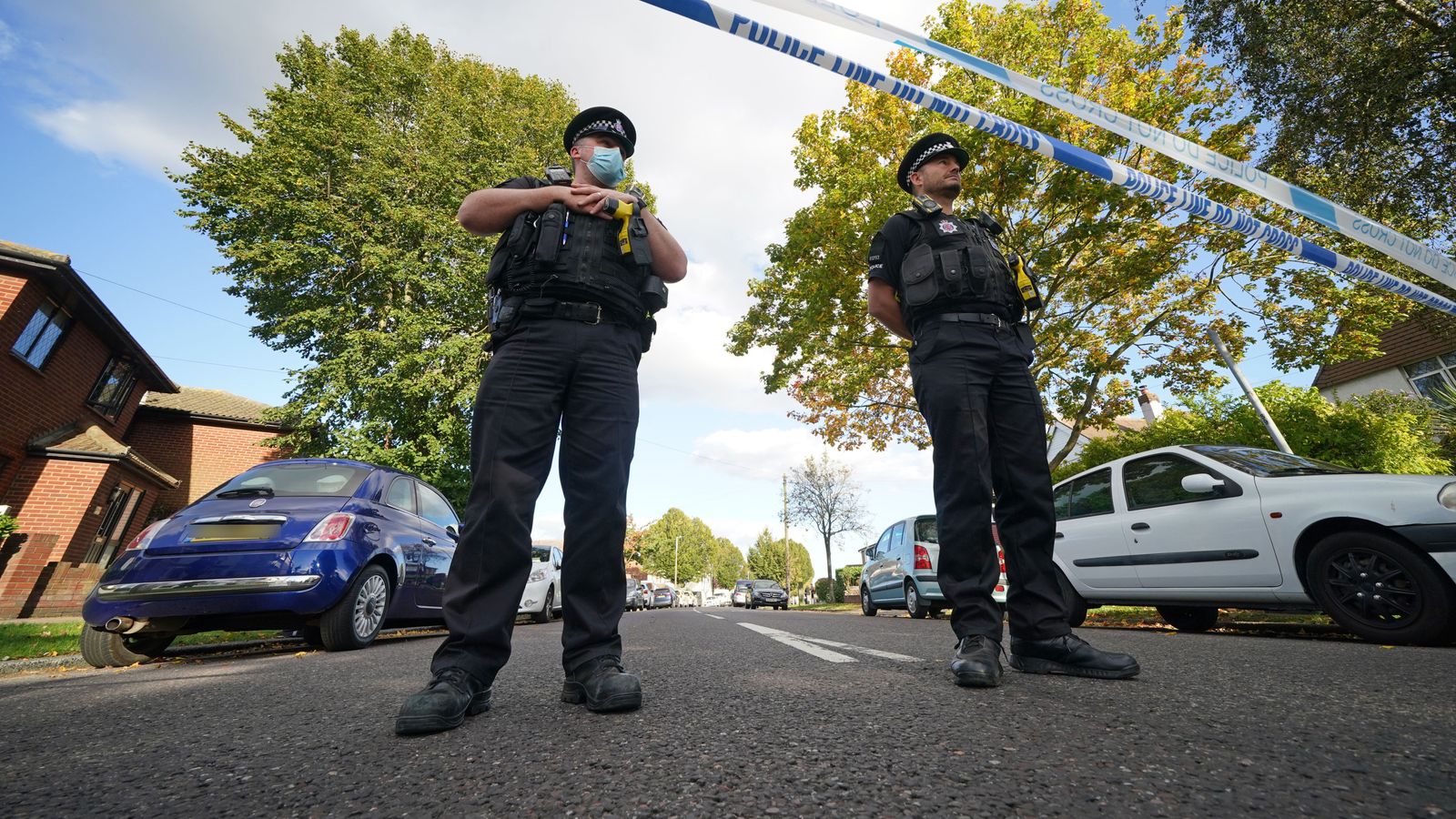 MPs are to be offered security guards to protect their constituency surgeries after the death of Conservative MP Sir David Amess last week.

The Home Office launched a review into MPs’ safety after Sir David was killed during a constituency surgery in Leigh-on-Sea, Essex, five years after Labour MP Jo Cox was murdered in similar circumstances.

A court heard that 25-year-old Ali Harbi Ali, who has been charged with the Conservative MP’s murder, purportedly first plotted to kill an MP two years ago.

Image: Sir David Amess had been an MP for 38 years

The Crown Prosecution Service (CPS) alleges the murder has a terrorist connection because of its “religious and ideological” motives.

He will appear in a crown court dock for the first time on Friday after being remanded in custody.

Sir David, who was 69, had been MP for Southend West for 38 years having first entered Parliament in 1983, and leaves behind his wife Julia and their five children.

In a letter from Home Secretary Priti Patel and Commons Speaker Sir Lindsay Hoyle to MPs, first reported by The Times newspaper, they say politicians will be “rightly concerned about their own safety and security and that of their staff” following Sir David’s killing.

Ms Patel and Sir Lindsay add that a “trained and accredited security operative” will be available to attend constituency surgeries from Friday and “urge” MPs’ to “take up this service”.

In a statement on Wednesday evening, the home secretary told the Commons that intelligence officers had upgraded the threat level for MPs to “substantial”, meaning a fresh attack is deemed likely.

Image: Sir David Amess was killed as he held a surgery at a church in his Essex constituency

Ms Patel said there had been a “change in risk” after an independent review by the Joint Terrorism Analysis Centre (JTAC) in the wake of the fatal stabbing of Sir David.

It is understood that the threat against MPs was previously deemed to be “moderate”, meaning an attack is “possible but not likely”.

“While we do not see any information or intelligence which points to any credible, specific or imminent threat, I must update the House that the threat level facing members of this House is now deemed to be substantial,” the home secretary told MPs.

“This is the same level as the current national threat to the UK as a whole.”

Ms Patel said she would ensure that security and intelligence agencies, as well as counter-terror police, would see the change “reflected in their operational posture”.

Earlier on Wednesday, police confirmed a man was arrested on suspicion of a public order offence after a mock gallows was erected by a group protesting against COVID-19 vaccines.

On Tuesday, Michael Gove had to be escorted to safety by police officers after he was surrounded by protesters on Horseferry Road in Westminster.

Video footage that emerged online showed Mr Gove, the Secretary of State for Levelling Up, Housing and Communities, being spotted by demonstrators as he walked in public.

As demonstrators ran towards the Conservative MP, he was quickly encircled by police officers who led him into a nearby office building.

Mr Gove later posted on Twitter: “Thank you to the Met for their swift reaction – I’m grateful to their officers for their thoughtfulness.”

Number 10 condemned “harassment and intimidation” of the cabinet minister by anti-lockdown demonstrators as “completely unacceptable”.

Asked about the incident involving Mr Gove on Tuesday, Prime Minister Boris Johnson’s official spokesman said: “The harassment and intimidation of anyone going about their daily business is completely unacceptable.

“We will expect the police to take this kind of behaviour seriously.

“While peaceful protest remains an important cornerstone of our democracy, threatening, intimidating or abusive language cannot be tolerated.”

The Metropolitan Police said that no arrests were made but that officers would review both video footage being shared online and their own officers’ body-worn cameras.

Accounts from the Independent Parliamentary Standards Authority showed MPs spent £2.5m on security in 2016/17 – up from £170,000 the previous year.

The murder of Jo Cox came six years after Stephen Timms was stabbed twice in the stomach at a constituency surgery in east London.

Mr Timms survived the attack and continues to serve as the Labour MP for East Ham.

And in January 2000, Andrew Pennington died while saving the life of Cheltenham MP Nigel Jones when they were attacked with a Samurai sword.

The 39-year-old, who was acting as an assistant to Mr Jones, was posthumously awarded the George Medal for bravery.

Asked if she feels enough is being done to help MPs feel safe, Foreign Secretary Liz Truss told reporters on Friday: “It is very, very important that we look properly at MPs’ security and the home secretary is determined to make sure that MPs are safe because it is a vital tenet of our democracy that MPs are able to go about their business, talk to constituents, work in the community without fear of the appalling attack we saw on Sir David Amess.”

COVID-19: Who can get a coronavirus booster jab