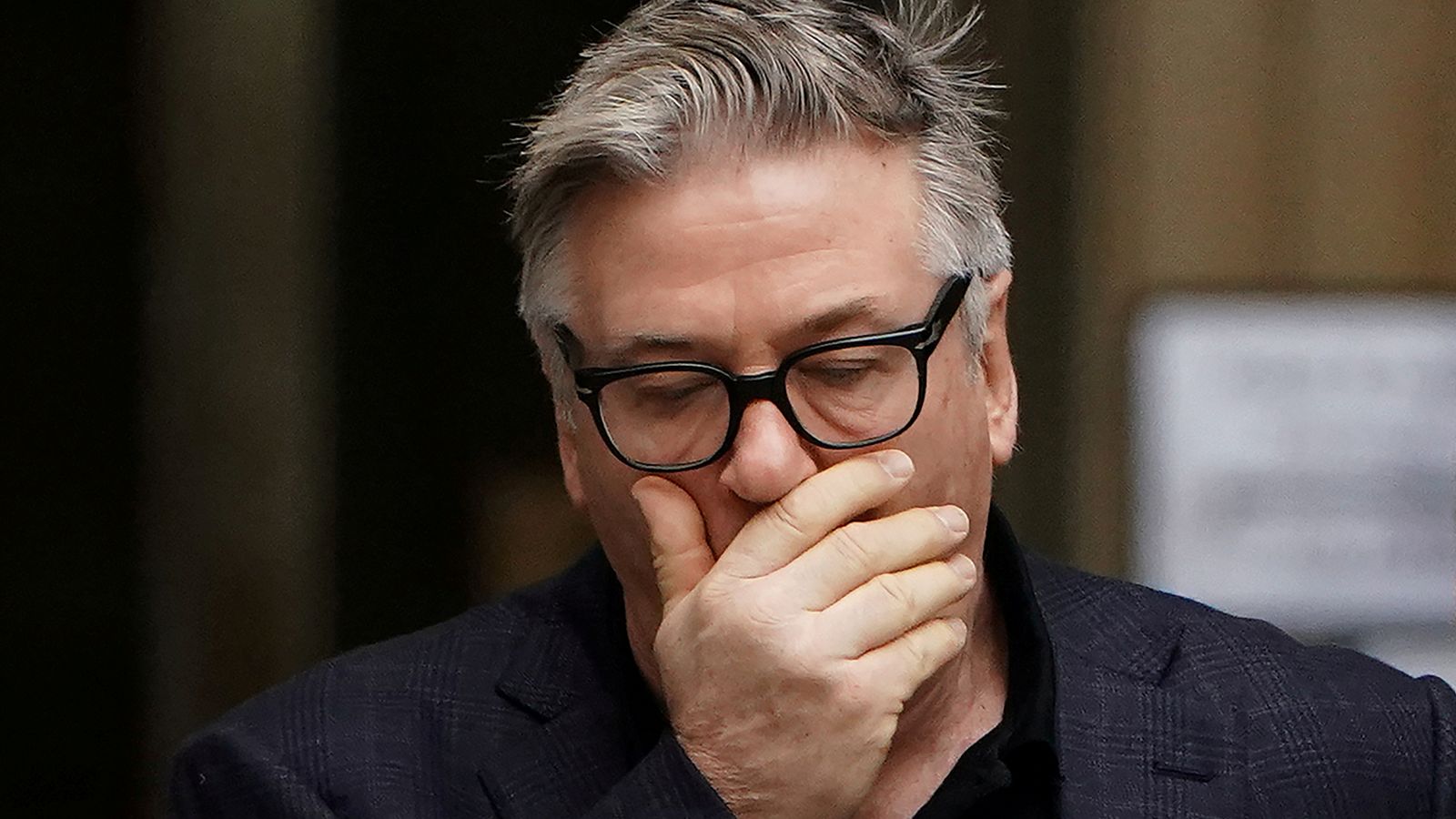 Alec Baldwin has had a long career by Hollywood standards, and comes from impeccable acting stock.

But the death of cinematographer Halyna Hutchins on set of after he fired a prop gun is not the first time the American movie star has made headlines his life off-screen.

Famed for both his Hollywood roles and personal drama the 63-year-old is the eldest of four brothers, all of whom work in the entertainment industry – and he is arguably the most well-known of the family.

Image: Alec Baldwin was seen in tears outside the sheriff’s office

He made a name for himself on the big screen in films such as Beetlejuice and The Hunt For Red October, as well as his collaborations with directors Woody Allen, in films such as Alice, and Blue Jasmine, and Martin Scorsese in The Aviator and The Departed.

He also stars opposite Tom Cruise in the Mission: Impossible films and was nominated for an Oscar for his 2003 film The Cooler.

He won two Emmys and seven Screen Actors Guild Awards for his role as Jack Donaghy on NCB sitcom 30 Rock, in which he starred opposite Tina Fey.

A woman has died and a man has been injured after Alec Baldwin discharged a prop firearm on a film set, officials have confirmed.

The actor returned to television and made a push towards a career in comedy in 2016 when he took over playing Donald Trump on Saturday Night Live, with his impressions earning him a huge fan following and the scorn of the former US president.

Mr Trump appeared to take issue, tweeting at the time: “The Baldwin impersonation just can’t get any worse”.

Baldwin, a Democrat and vocal critic of Mr Trump, said the show – which earned him his third Emmy – helped revive his comedy career.

The father-of-seven is no stranger to controversy.

In May 1990, Baldwin met actress Kim Basinger on the set of The Marrying Men. The couple were married for nine years and involved in a bitter and protracted court battle before divorcing in 2002.

In 2007, Baldwin left an angry voicemail on his 11-year-old daughter’s phone, in which he called her a “thoughtless, little pig”.

The voicemail was leaked after being included in a sealed court file regarding Baldwin and Basinger’s custody battle.

At the time of the message, Ireland lived with her mother and failed to answer a call from her father.

Image: Baldwin hit the headlines over a voicemail he left daughter Ireland in 2007

“You are a rude, thoughtless little pig. You don’t have the brains or the decency as a human being,” Baldwin said in the message.

The 59-year-old actor apologised, attributing it to the grief of being “alienated as a father” and said he had suicidal thoughts after it was made public.

He is now married to yoga teacher Hilaria Thomas, with whom he has six children.

In October 1995, Baldwin allegedly assaulted a photographer who was videotaping his ex-wife with their three-day-old daughter as they returned home from hospital.

Baldwin later had to pay damages to the celebrity snapper after he broke his glasses and nose and sprayed his truck with shaving cream.

In 2013, police were called after he was apparently involved in an altercation with a professional photographer outside his apartment in New York City.

Image: Baldwin walked out of the New York Police Department’s 10th Precinct after he was arrested over a parking space disput

It happened days after his second wife, Hilaria, had given birth to the couple’s first daughter.

“All I can say is I was doing my job asking him normal questions and he flipped. That’s all,” the man told TMZ.

His late-night talk show “Up Late with Alec Baldwin” was also axed in 2013 after he apologised for homophobic commentsmade during the confrontation.

He also pleaded guilty to harassment and agreed to take an anger management class following a dispute over a parking space in 2019.

Image: Alec Baldwin outside court in New York after he pleaded guilty to harassment over a parking row

Baldwin was thrown off a flight from Los Angeles to New York in 2011 after he refused to stop playing the game Word with Friends on his smartphone.

While waiting for take-off, Baldwin allegedly verbally assaulted the flight attendant before being removed from the plane.

He later vented his anger on Twitter, likening the attitude of staff to “retired Catholic school gym teachers from the 1950s”.