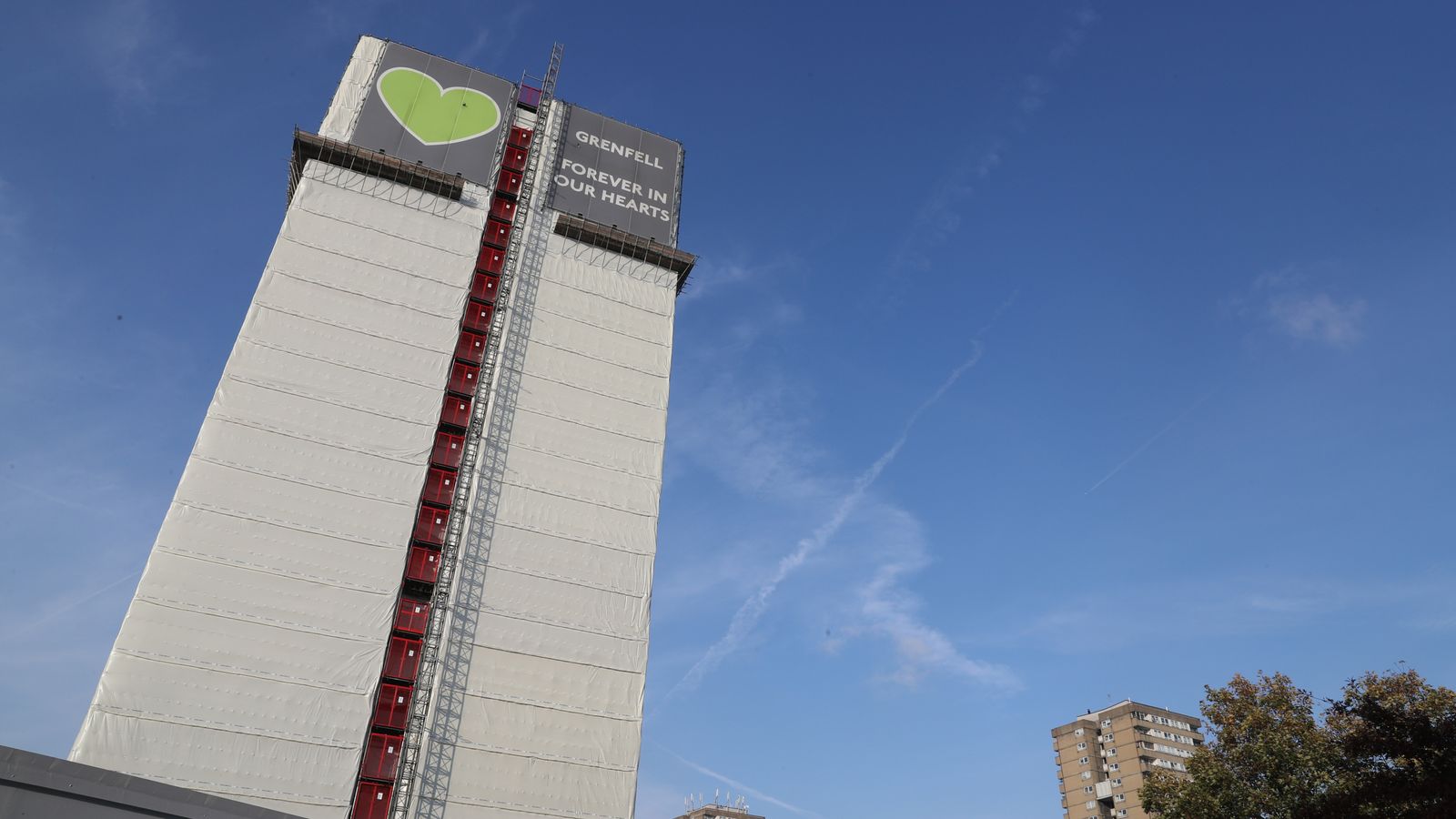 The removal of dangerous cladding from high-risk buildings is unlikely to be complete until seven-and-a-half years after the Grenfell Tower tragedy, government data suggests.

The timeframe has been projected from analysis of the latest monthly figures released by the recently renamed Department for Levelling Up, Housing and Communities (DLHC).

If work continues at the current rate, it will take several more years for the cladding to be removed from all buildings identified as being at high risk.

The Grenfell Tower fire happened in June 2017, with 72 people losing their lives.

Image: Workmen remove cladding from a block of flats in Paddington, north London

According to data from September, 168 buildings are still being worked on and 30 are not even under way. Some have had their cladding removed, but not yet been signed off.

Last December, there were 45 buildings that still had unsafe cladding and where no work had started, with some 201 buildings still undergoing work to remove ACM cladding.

Since then, 61 buildings have had cladding removed – but only £79m of the government’s £200m funding pledge to support private leaseholders with the work has been spent so far.

In February, then-housing secretary Robert Jenrick announced a further £3.5bn to “end the cladding scandal”, but the government was immediately criticised for only offering loans for the removal of cladding on smaller buildings

The government says DLCH Secretary Michael Gove is looking “afresh” at the issue to ensure work is being done as soon as possible, but critics have said the current projected timescale is unacceptable.

Labour said the government had “missed every deadline and broken every promise” regarding the pledges it made following the Grenfell tragedy.

The Liberal Democrats’ spokesperson for housing, Tim Farron, said it was an “utter disgrace” that the work could take until the end of 2024.

Mr Farron has called on Chancellor Rishi Sunak to put the removal of cladding at the heat of next week’s budget.

“People deserve to live in safe homes, yet years after an avoidable tragedy, the government is shamefully dragging its feet and turning its back on tenants and leaseholders,” he said.

Campaigner Giles Grover, from the group Manchester Cladiators, said those affected were being “betrayed by the government’s continuing warm words and vague promises that are never backed up with firm action on the ground”.

“The government completely failed to meet its initial ACM remediation target date of June 2020 and subsequently pushed this back to the end of 2021,” he said.

“Yet, at this rate, that deadline will have to be pushed back once again, meaning thousands of people in those buildings are still trapped in limbo.”

February: ‘Leaseholders will face no cost’ for cladding removal

A DLHC spokesperson said: “We will not compromise on building safety, and building owners must take swift action to fix dangerous cladding. The government will fund every eligible application to the Building Safety Fund.

“So far we’ve processed over 600 building applications, with estimated remediation costs of £2.5bn, and we are progressing the remainder as quickly as possible.

“Of high-rise residential buildings identified as having unsafe ACM cladding at the beginning of 2020, 97% have been fully fixed or have works under way, backed by over £5bn.

“The new secretary of state is looking afresh at work in this area to ensure we are doing everything we can to protect and support leaseholders, and he will not hesitate to take further action if necessary.”