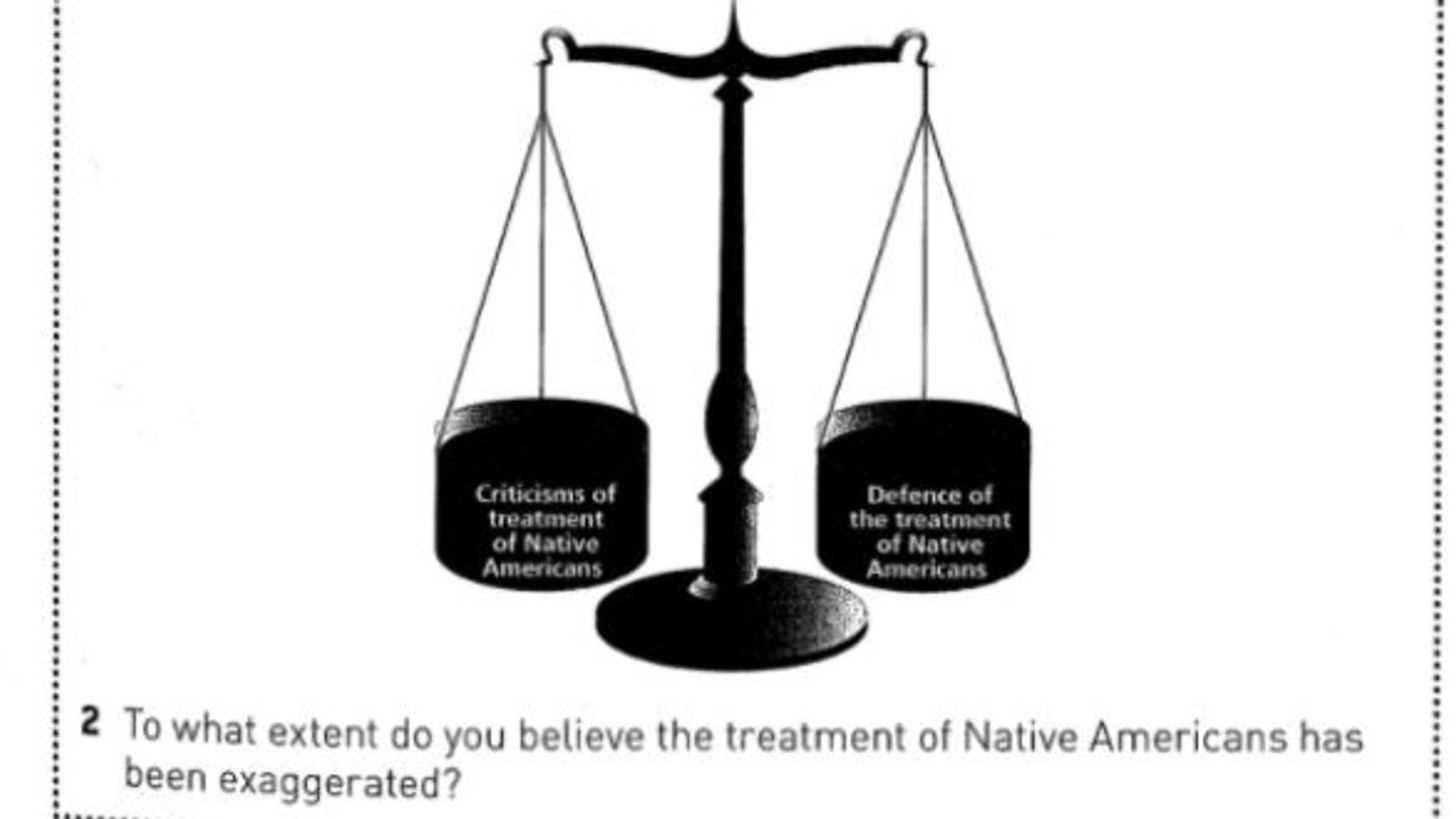 Racial injustice is “baked into our curriculum”, a teacher who complained about a history textbook has said.

Hannah Wilkinson, who mentors A-level pupils in Durham, objected to a question about Native Americans, which asked if their “treatment” had been “exaggerated”.

She told Sky News it was “problematic” because the “starting premise” was an “assumption” of over-exaggeration.

The Cambridge history graduate said she was “horrified” by the question and that Native Americans had been subjected to genocide.

There was also a suggestion that jobs were a suitable replacement for lost lives and land, she added.

In a tweet, she included a picture from the book of a set of scales, which pupils were told to balance.

Two captions asked them to consider criticism of the treatment of Native Americans – versus a defence of that treatment.

A question asked: “To what extent do you believe the treatment of Native Americans has been exaggerated?”

Ms Wilkinson said to the AQA regulator: “In what world is this is an acceptable question/exercise to ask students to complete on the history of Native Americans in late 1800s US?”

The book, which is called USA 1865-1975: The Making Of A Superpower, has been withdrawn and the AQA said its content is being reviewed.

I do some history mentoring and while prepping for tomorrow’s session i have some questions for you @AQA.

In what world is this is an acceptable question/exercise to ask students to complete on the history of Native Americans in late 1800s US? Actually horrified. pic.twitter.com/zQRoDWy4DD

Ms Wilkinson said that during the westward expansion of the United States, Native Americans were “pushed off their land, a lot of them were killed, and they were really seen as a secondary consequence to this great American project of expansion and domination”.

They were also given blankets deliberately infested with smallpox, she added.

“The problem with the history textbook is that it’s assuming (the above) is over-exaggerated,” she continued.

There have been accusations on social media that Ms Wilkinson dislikes critical thinking, but she denied that.

“Next to the balance scale, which is already pretty telling in itself, with the implications that this is a 50/50 thing that we can look at from both angles, they’ve cited ‘while some Native Americans were given jobs’.

“So even though maybe their families were killed, or they had land taken from them, they were employed.

“The assumption that that is an equal scale I think is incredibly problematic.”

Her objection goes a long way beyond how the textbook’s content is phrased, she said, adding: “I think it shows a blind spot in the way that we perceive history, and I think it shows gross racial injustice that’s baked into our curriculum.”

In a reply to Ms Wilkinson, the AQA said it had spoken to the book’s publisher, Hodder Schools, adding: “They’ll remove this book from sale and review its content.

“We’re also working together with publishers to ensure that new and updated editions of AQA approved textbooks meet our commitment to EDI (equality, diversity and inclusion).”

In response, Hodder Education tweeted: “Thank you for bringing this to our attention. We agree that this content is inappropriate and are going to remove this book from sale.

“We will conduct a thorough review of the content with subject experts.”