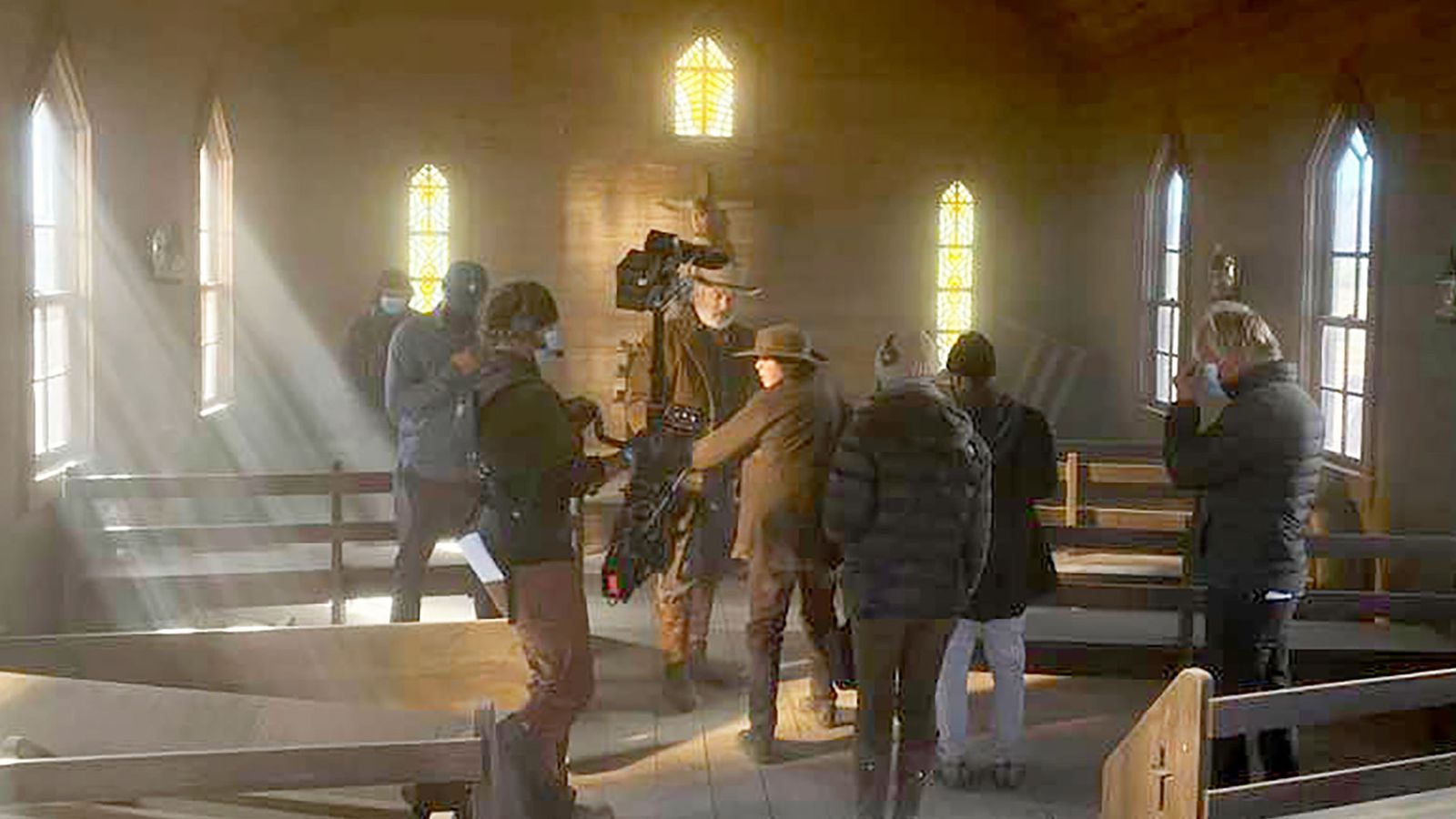 What is thought to be the final image of Halyna Hutchins on the set of the film Rust shows her standing in front of Alec Baldwin before the actor accidentally shot and killed her.

The 42-year-old cinematographer can be seen dressed in a beanie with headphones on and her back to the camera, while Baldwin can be seen in costume.

The image was shared by the film’s chief electrician, Serge Svetnoy, who had worked with Ms Hutchins on several films before.

Image: Halyna Hutchins, 42, was killed in the shooting

Mr Svetnoy said “her blood was on my hands” as he held her in his arms while she was dying.

In a charged post on Facebook on Sunday, he blamed producers for her death and called out “negligence and unprofessionalism” among those handling the weapons.

He said the picture was “the last photo with Halyna on set”.

It comes as the local district attorney said criminal charges in the case have not been ruled out.

Santa Fe County District Attorney Mary Carmack-Altwies told the New York Times an “enormous amount of bullets” had been found on the set and an investigation was needed into the nature of that ammunition.

She also said it was incorrect to refer to the firearm used in the accident on the set of a western film as a “prop gun”.

“It was a legit gun,” Ms Carmack-Altwies said. “It was an antique-era appropriate gun.”

The gun used by Baldwin was one of three that a firearms specialist, or “armourer” had set on a cart outside the building where the scene was being rehearsed, court records said.

Assistant director Dave Halls had taken a gun off the cart and handed it to Baldwin, shouting “cold gun” to indicate the gun was safe.

But court records say it was loaded with live rounds.

Director Joel Souza was also wounded in the shooting.

Image: Alec Baldwin has described the killing as a ‘tragic accident’

A prop maker and licenced pyrotechnician who worked with Mr Halls on another production said she had raised safety concerns about him in the past.

In a statement on Sunday, Maggie Goll said she filed an internal complaint with the executive producers of Hulu’s Into the Dark series in 2019 over concerns about his behaviour on set.

And The Los Angeles Times has cited two unnamed Rust crew members who said five days before the shooting, Baldwin’s stunt double accidentally fired two live rounds after being told the gun did not have any ammunition.

According to the paper, a concerned crew member told a unit production manager in a text message: “We’ve now had 3 accidental discharges. This is super unsafe.”

Baldwin, known for his roles in 30 Rock and The Hunt for Red October, as well as his impressions of former US president Donald Trump on Saturday Night Live, described the killing as a “tragic accident”.