Budget 2021: What we already know, what could be announced 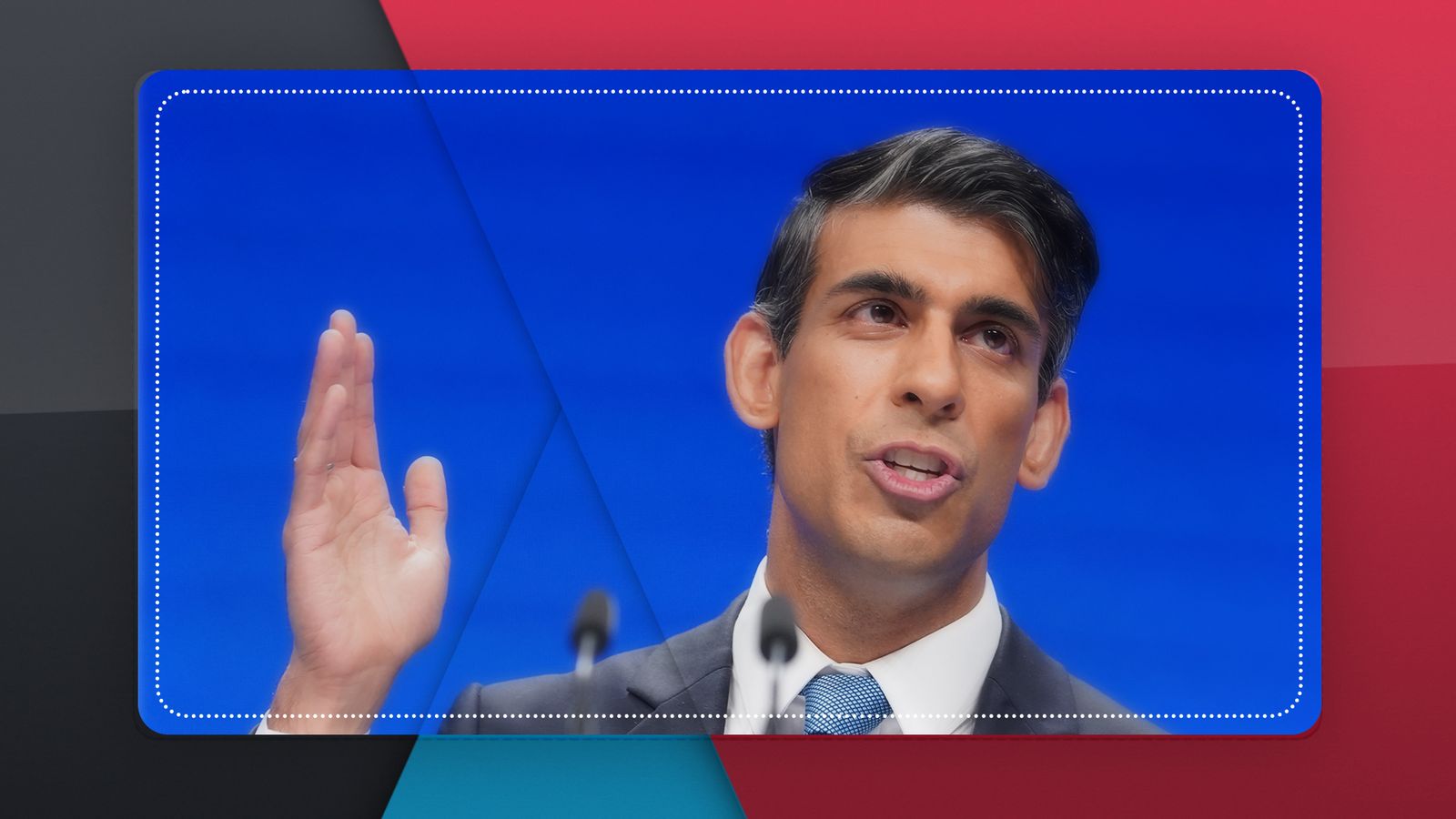 Rishi Sunak will deliver his autumn budget and spending review to MPs in the Commons today, setting out the government’s financial strategy.

It should take place at around 12.30pm, just after the conclusion of Prime Minister’s Questions.

Update: The budget has now been unveiled – here are the key announcements

The chancellor’s address usually lasts around an hour – although in 1853 William Gladstone spoke for an impressive four hours and 45 minutes.

Image: Rishi Sunak is likely to focus his statement on the country’s recovery from COVID-19

It will be Mr Sunak’s second budget of the year as he delivered a statement on 3 March after the previous autumn’s address was delayed due to the coronavirus pandemic.

It is expected that much of the chancellor’s statement today will focus on the next steps in the UK’s economic recovery from COVID-19.

Mr Sunak has pledged to “drive growth while keeping the public finances on a sustainable path”.

Alongside the budget, the chancellor will also set out the resource and capital budgets of the UK government departments for 2022-23 and 2024-25, as well as the devolved administrations’ grants for the same period.

What has already been announced?

The Treasury has already released a flurry of announcements in the lead up to the budget, including in areas such as health, wages, transport, housing and education.

Speaker of the House of Commons Sir Lindsay Hoyle made his disproval at the situation known in the Commons on Monday, telling ministers it was “not acceptable” for departments to be briefing the media ahead of MPs.

Image: Commons Speaker Sir Lindsay Hoyle has given MPs many warnings about briefing announcements to the media before they have been made to MPs. Pic: Jessica Taylor/UK Parliament

Sir Lindsay also reminded the Commons that in 1947, then-chancellor Hugh Dalton resigned after leaking some of the contents of his budget to a journalist.

Here’s what we already know:

Image: NHS England will receive £5.9m to reduce the backlog of people waiting for scans

• NHS England will receive £5.9bn to tackle the backlog of people waiting for tests and scans.

• The sum incudes £1.5bn for more beds, equipment and new “surgical hubs”, £2.3bn on diagnostic tests including the creation of ‘one-stop-shop’ centres for scans and £2.1bn to improve IT in hospitals.

• £5bn for the health department to fund research and development over the next three years.

Image: The National Living Wage will rise to £9.50 per hour from next April

• millions of nurses, teachers and members of the armed forces will receive a pay rise due to the end of a one-year public sector pay freeze.

Image: The city regions will be given money to improve their transport networks

• England’s city regions – including Greater Manchester, the West Midlands and West Yorkshire – will receive a share of £6.9bn to spend on rail, bus and cycle projects in their areas.

• However, on Sunday, Mr Sunak admitted to Sky News that only £1.5bn of this is new money, as the government is including £4.2bn that was promised in 2019 alongside funding for buses announced by Boris Johnson in 2020.

Image: The government is investing in building more houses on brownfield sites

• £9m on “pocket parks” the size of a tennis court across the UK, which it is hoped will create more green spaces.

Image: Around 30,000 more school placed will be created for pupils with special educational needs

• £2.6bn on 30,000 new places for children with special educational needs and disabilities.

Image: The Treasury has pledged money to support new parents with their mental health and breastfeeding

• The government has pledged £500m to support parents and young children.

• This includes £82m to fund advice centres for parents, £100m for mental health support, £50m for breastfeeding support and £200m to support families with complex issues.

• Labour has said the new centres are similar to Sure Start children’s centres which the government previously closed, but Mr Sunak insisted this initiative is “broader”.

• £435m for crime prevention and the Crown Prosecution Service – some focused on improving the response to rape and sexual assault cases.

What else is expected to be announced?

While the Treasury has released a deluge of funding announcements in the days before Wednesday’s budget, there are likely to be a few other issues which could be addressed:

Image: The capital gains tax may be hiked in the Budget

Due to the government’s high borrowing record during the pandemic, taxes are unlikely to be cut in the autumn budget.

However, it has been pre-empted that Mr Sunak may hike capital gains tax – the tax on the profit when someone sells or disposes of an asset that has increased in value.

It has been suggested that the sum could be brought more into line with income tax. In his last budget, the chancellor froze capital gains tax until 2026.

Image: It is rumoured that the government may lower the student loans repayment threshold

It has been rumoured that the chancellor may lower the threshold at which people start repaying their student loans, which it is predicted could save the Treasury about £2bn a year.

The government is considering recommendations set out in the 2019 Augar review, which said deductions for student loan repayments should be applied once an individual earns £23,000 rather than the current rate of £27,295.

But Conservative former education secretaries are divided on the proposal.

But Justine Greening told Sky News that introducing such a policy would entrench the equality gaps in education “even further”.

Ms Greening, who stood down as an MP in 2019, said such a change could result in students from poorer backgrounds viewing university as unaffordable.

Image: The duty on spirits such as whisky could be increased

There has been suggestion that Treasury officials are wanting to change the current system of alcohol duties as they perceive it as too complicated.

But this could also see the duty on spirits such as gin and whisky hiked.

The Small Breweries’ Relief (SBR) could also be reduced, which has left craft and independent brewers concerned that their recovery after the pandemic will be hampered.

Image: Air Passenger Duty could be hiked for long haul flights such as the UK to Australia

It has been suggested a third band could be created for distances over 6,000 miles.

This move would increase the levy for longer journeys which would impact the cost of plane tickets to countries including Australia, South Africa and Japan.

With Glasgow hosting the COP 26 climate summit from 31 October, Mr Sunak has the potential opportunity in his budget to show how the government is progressing the country’s economy towards carbon neutrality.

This could mean a return to fuel duty increases in the future.

However, the average forecourt price per litre hit a record high of 142.94p on Sunday, and it is suggested this may have forced the chancellor to discount such a proposal.

What could be missing from the Budget?

Reports emerged last month that the chancellor was considering cutting the current 5% VAT rate on household energy bills amid fears of a winter crisis.

However, such a move could frustrate the government’s green ambitions ahead of the COP 26 climate summit in Glasgow next week.

Announcement on the eastern leg of HS2:

Image: The government is yet to reaffirm its commitment to the eastern leg of HS2

Speculation is mounting that the government will abandon plans to build the eastern leg of High Speed Rail 2 to Leeds.

Deflecting a question on the matter on Sky’s Trevor Phillips on Sunday, the chancellor refused to be drawn on the future of the eastern leg and also failed to confirm whether a new Northern Powerhouse Rail link from Leeds to Manchester via Bradford would be built.

HS2 is a planned high-speed rail network between London, the West Midlands, Manchester and Leeds. The project has been beset by delays and rising costs since its announcement.

The Spending Review could be seen as a good time to confirm the future of the project.

However, a government source told Sky News not to expect an announcement on HS2 in the budget as the matter will be dealt with afterwards when the Integrated Rail Plan is published.

On Sunday, Mr Sunak told Sky News the plan would be published “shortly”.

Responding to Mr Sunak’s comments, Labour’s shadow chancellor Rachel Reeves told Sky News there is a “huge gaping chasm” between the government’s rhetoric and delivery on transport infrastructure in the north.

Image: The temporary £20 uplift to Universal Credit was removed earlier in October

Earlier this month, the government removed the £20 temporary uplift to Universal Credit which was implemented during the pandemic.

To ease the blow of the cut for claimants, some have been lobbying the Treasury to raise the base figure for in-work recipients to help working families keep more of their money.

This could be done by cutting the taper rate – the amount of Universal Credit withdrawn for every pound someone earns.

However, the taper rate has not been amended for five years.

Image: High Street shop owners are calling for business rates to be reduced

In March 2020, a few weeks before the country was placed into lockdown due to the coronavirus, the Treasury promised a fundamental review of how business rates work.

High street shops say they are heavily disadvantaged compared to large Ecommerce stores such as Amazon due to the high sums they must pay for their shop fronts.

However, it is thought that no large-scale reform will be announced in Wednesday’s budget while the economy continues to recover from the pandemic.

Why is the budget important?

The budget sets out how the government is going to spend the nation’s money so affects us all.

However, it is arguably even more important this year because of the economic impact of the coronavirus pandemic.

The government is still under pressure to use this budget to outline plans for dealing with how the UK will pay off the huge debts built up during COVID-19 and how the government will continue to support those people and businesses who were disproportionately economically impacted by the pandemic.

Image: The chancellor is the only member of the House of Commons allowed to drink alcohol in the chamber, according to a historic ritual

• A chancellor can take an alcoholic drink into the Commons to have when they are delivering their budget. It is the only time an MP is allowed to do so

Follow budget coverage live on Sky News with the chancellor’s announcement from 12.30pm