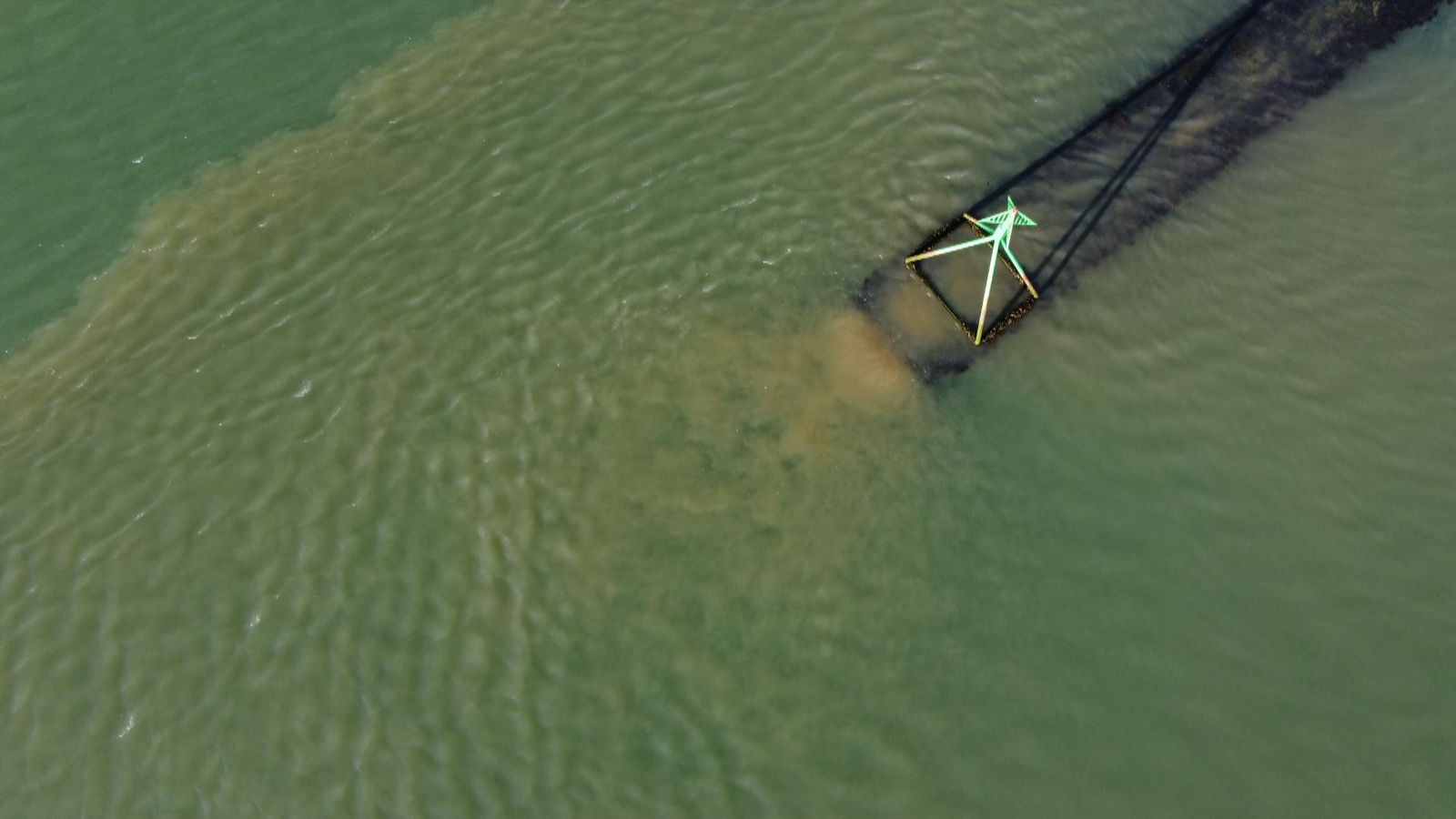 The government has U-turned by deciding to put legal controls on water firms dumping raw sewage in the sea and rivers across the country despite recently forcing Tory MPs to vote down similar proposals.

The Department for Environment, Food and Rural Affairs (Defra) announced on Tuesday that the Environment Bill “will be further strengthened with an amendment that will see a duty enshrined in law to ensure water companies secure a progressive reduction in the adverse impacts of discharges from storm overflows”.

It comes after several Tory MPs faced a huge backlash from constituents and campaign groups after they voted down an amendment tabled by the Lords last week.

Image: Surfers Against Sewage unveiled this installation at Watergate Bay in Newquay in the summer

Environment Secretary George Eustice said: “Earlier this summer, the government published a new strategy for Ofwat mandating them to progressively reduce the discharge of sewage from storm overflows in the next pricing review.

“Following a debate in the House of Commons last week during the final stages of the Environment Bill, today we are announcing that we will put that commitment on a statutory footing with a new clause.”

During periods of heavy rain or storms, wastewater is released into rivers and coastal areas as a way to prevent sewers from becoming overloaded by sewage and rain then backing up into homes and businesses.

But the UK’s water infrastructure has been struggling to keep pace as climate change causes greater rainfall and the population continues to grow, meaning water firms are resorting to sewage outfalls more and more frequently.

Earlier on Tuesday, a Downing Street spokesman said the government agrees that “the current failure of water companies to adequately reduce sewage discharges is unacceptable”.

But he defended the government’s position to force MPs to vote down the original amendment as it remained “un-costed” and the initial assessments to fix the UK’s water infrastructure “are over £150bn”, resulting in taxpayers footing potentially thousands of pounds each.

However, Tory MPs have continued to face criticism from activists and campaign groups, which even prompted several to release statements defending their decision.

Raymond Simonds, a resident of Seaview on the Isle of Wight who has been campaigning for Southern Water to fix infrastructure causing increasingly frequent sewage dumps in the Solent, has welcomed the government U-turn.

He told Sky News that sewage outfalls near beaches and bathing water have become a concern for the local Isle of Wight economy, which heavily relies on tourism.

“In July, we had a particularly bad sewage dump,” added Mr Simonds, whose local MP Bob Sealy was among the Tory members who voted down the amendment.

“We have a sailing school and some of the mothers were so concerned about what they could see coming out of the pipes on the beach that they took their children out of the school.

“Especially in this day and age it is not acceptable and looking to the future we can’t allow this to continue.”

Mr Simonds said he was “delighted” by the government U-turn, adding that Southern Water has also now agreed to meet local residents and officials to address their concerns and priorities.

Luke Pollard MP, Labour’s shadow environment secretary, responded to the U-turn saying: “It should not have taken a public outcry for this government to take the scandal of raw sewage being discharged into our rivers seriously.

“Having spent the past few days defending their position, this screeching U-turn will do little to convince the public that the health of our rivers, rather than the health of Conservative polling, is at the forefront of ministers’ minds.

“The government still has no clear plan and no grip on the issue of raw sewage being pumped into our seas and rivers.”

Budget 2021: What we already know, what could be announced