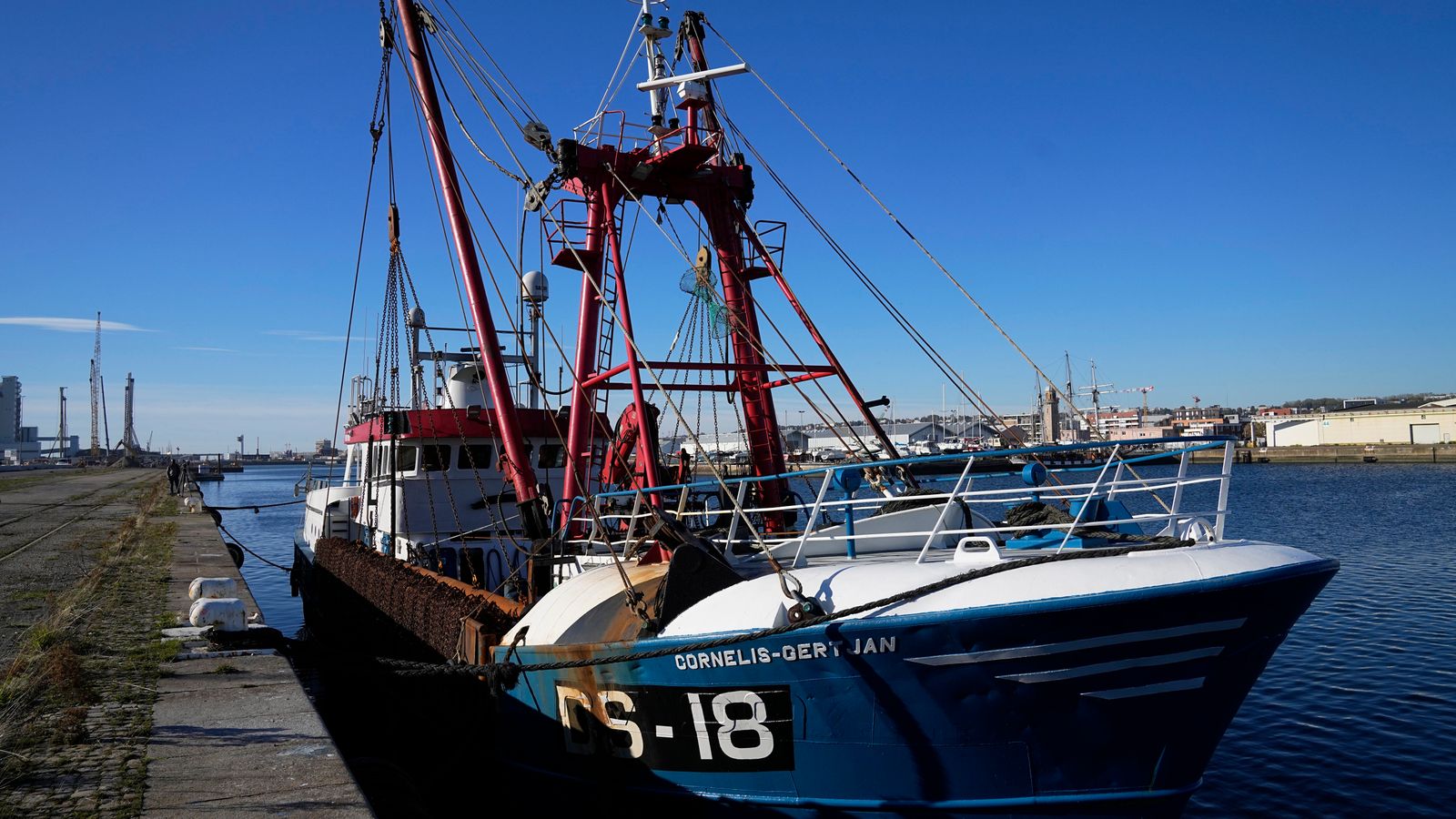 The environment minister has said “two can play at that game” after France made “unacceptable” threats over the UK not issuing licences to some French boats.

George Eustice told Sky News the UK has issued post-Brexit licences to 1,700 vessels, including 750 French fishing boats, which amounts to 98% of applicants.

He said the remaining 55 vessels, despite the UK trying to help them with the data, could not prove they had fished in Jersey’s waters previously so could not get a licence under the trade and co-operation agreement with the EU.

France has detained a British scallop trawler and fined two other UK fishing vessels over the row.

Paris has also threatened to block French ports, carry out security checks on British vessels, reinforce controls of lorries to and from the UK, reinforce customs and hygiene controls and raise tariffs.

Mr Eustice told Sky News’ Vanessa Baffoe: “We don’t know what we’ll do, they said they wouldn’t introduce these measures until Tuesday at the earliest, we’ll see what they do.

“But if they do bring these measures into place, well, two can play at that game and we obviously reserve the ability to respond in a proportionate way.”

Moments after Mr Eustice spoke to Sky News, the prosecutor in the French port of Le Havre said the captain of the detained scallop trawler Cornelis will be called to appear in court in August next year.

The prosecutor’s office said the trawler did not have the required licences to operate in France’s “exclusive economic zone” – something the captain denies.

The environment secretary hinted Boris Johnson could speak to French President Emmanuel Macron about the row as they will be at the COP26 climate summit in Glasgow together from Sunday.

Image: Macduff’s scallop vessel Cornelis was boarded by the French authorities and ordered into the French port of Le Harve. Pic:AP

Mr Eustice added that the comments made by France are “completely disproportionate, they’re unacceptable”.

“The things they’re suggesting doing, start to make things difficult at borders, close ports, this is a clear breach not only of the trade and co-operation agreement that we’ve got with them but also of EU law, the official control regime,” he said.

“It’s not justified at all, it’s a very small number of vessels that just don’t qualify under the terms of the agreement reached.

“We’re asking France to try to calm this down, remove these threats, they’re not acceptable.”

Mr Eustice said the UK will be talking to the European Commission and they need to step in and sort the issue out, but me insisted the UK is correct.

French Minister: ‘It is a fight’ with UK

Labour’s shadow environment secretary Luke Pollard told Sky News the seized scallop vessel did have the proper licence but he believes it was not included on a list handed to the French authorities so it could be an “administrative error”.

He said if that is the case then UK ministers “need to own up to that”.

Last night, Brexit minister Lord Frost held a meeting of UK ministers, and the French ambassador to the UK is meeting Foreign Secretary Liz Truss later today about the issue after she was summoned yesterday.