COP26: Greta Thunberg mobbed as she arrives in Glasgow ahead of climate summit 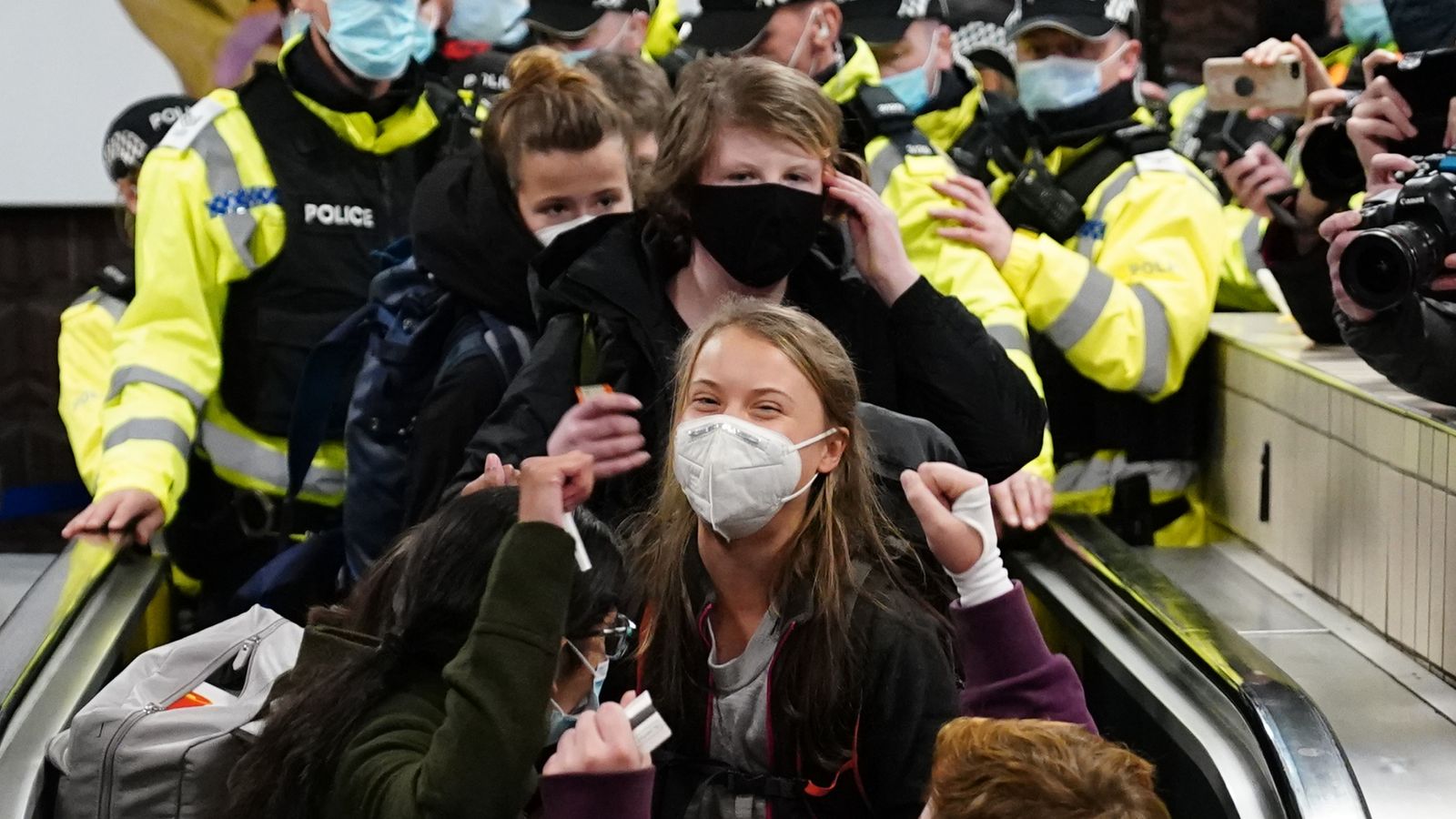 Greta Thunberg has arrived in Glasgow ahead of the COP26 summit, where world leaders are set to discuss how to tackle the climate crisis.

The 18-year-old Swede gave the cameras a thumbs-up as she made her way through Glasgow Central Station on Saturday evening after travelling from London Euston by train.

It comes after Ms Thunberg revealed she had not been “officially” invited to the summit.

Image: The Swedish activist was surrounded by police and fellow activists upon arrival in Glasgow

Despite being surrounded by police and other environmental activists upon leaving the train, she appeared in high spirits.

The international conference officially kicks off on Sunday, with a summit of 120 dignitaries and heads of state commencing the following day.

Ms Thunberg’s arrival in Glasgow comes after she took part in a demonstration outside a bank in London on Friday.

Image: Ms Thunberg has accused the British government of being ‘climate villains’

She was mobbed by fellow activists at the protest outside the Standard Chartered headquarters, as thousands of people attended Day of Action protests across 26 countries against the financing of fossil fuel projects.

Earlier this week, Ms Thunberg accused the British government of being “climate villains”.

She said that the UK, like many other countries, engages in what she called “creative carbon accounting”, where emissions from exported fossil fuels or international shipping and aviation are not currently counted.

Image: Ms Thunberg attended a protest in London ahead of the UN Climate Conference

“I find it very strange that they’re like, they are the ones who we’re supposed to look up to now, but they are objectively one of the biggest climate villains, which I find very strange,” Ms Thunberg told Sky News.

But a government spokesperson said: “Given the UK has cut emissions faster than any other major economy over the past three decades, and that we are the first country to legislate to reach net zero by 2050, we stand by our assertion that we are leading the way in the fight against climate change.”

Ms Thunberg is expected to participate in other climate change rallies during the two-week summit in Glasgow, and is due to speak at a protest taking place on Saturday hosted by the COP26 Coalition.

Despite being one of the world’s most prominent climate activists, Ms Thunberg previously said she had not received an official invite to the key summit.

Image: Greta Thunberg gives a thumbs up after arriving in Scotland

In a preview clip where she spoke to the BBC’s Andrew Marr, she was asked whether she had been asked to join.

“I don’t know. It’s very unclear. Not officially,” she said.

She added: “I think that many people might be scared that if they invite too many radical young people, then that might make them look bad.”