Insulate Britain: 10 arrested on M25 after protesters walk between lanes of oncoming traffic 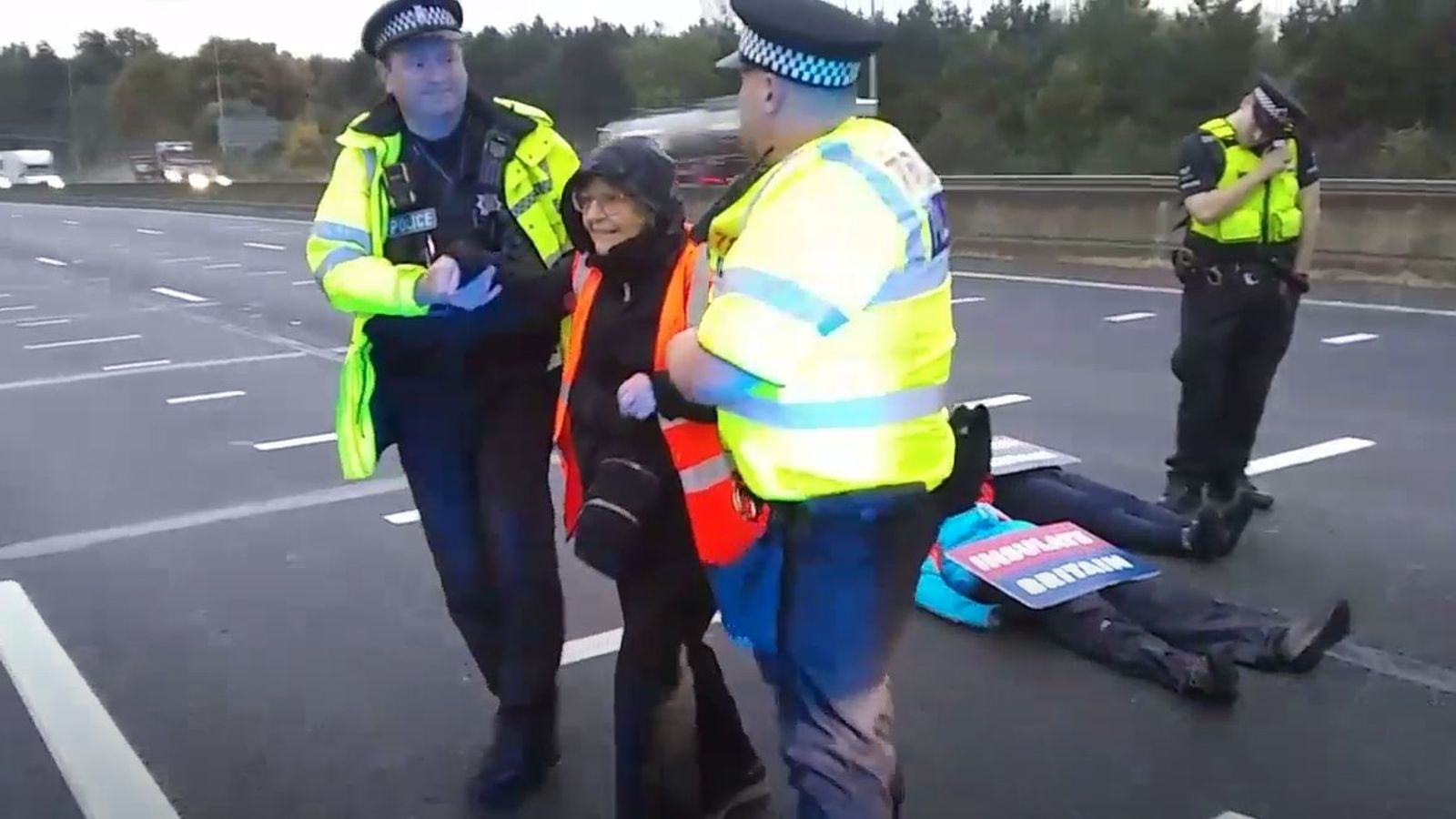 Ten people have been arrested after Insulate Britain protesters went on to the carriageway of the M25 and walked between lanes of oncoming traffic.

On Friday morning, 14 people went on to the main carriageway between junction 28 and 29 of the motorway in Essex.

Hours later, two further groups of protesters walked along the white lines of the motorway at junctions 21 and 22.

Image: The group returned to the M25 again on Friday morning

It is the 17th time in six weeks the group has caused disruption on the roads.

The group said the decision to stop sitting in the middle of roads to block vehicles had been made following “feedback” that many drivers were frustrated by their actions.

Essex Police confirmed 10 people had been arrested on Friday morning.

In a statement, the force said: “We were called around 8am this morning with reports that a number of people had been seen walking into the traffic to block both carriageways between junctions 28 and 29.”

Chief Inspector Lee Devall added: “Not only will incidents of this nature be frustrating for road users trying to reach their destination, walking into fast moving traffic is extremely dangerous.

“I’d like to thank road users today for their patience and understanding.

“Our teams are experienced at dealing with incidents which cause significant disruption and are well prepared for them.”

“We will continue to deal with these incidents robustly.”

A spokesperson for the group, who gave his name as Biff, said safety was “paramount” and the protests would not have proceeded if cars did not slow down sufficiently.

“The intention is to enter the carriageway and walk towards the oncoming traffic along the white lines,” he said.

“If cars don’t slow down and are hurtling along at full speed then we will be on the hard shoulder wearing our hi-vis with the banners.

“We would hope that it slows down anyway.

Image: Essex Police were on the scene

He added: “We’ve had feedback that people are frustrated that they spent time in traffic queues.

“This is like a rolling traffic queue, so we’ll move, and once they get to the front they will be able to move on.

“We’re not planning to stop traffic but it could slow down to five miles an hour.

Image: The group walked into oncoming traffic to block the motorway

On Wednesday, Insulate Britain asked motorists to avoid the M25 or reduce their speed to 20mph to minimise the risk of accidents.

It comes after a nationwide injunction was granted against protesters, covering the “entire strategic road network”.

An offshoot of Extinction Rebellion, the group wants the government to insulate all UK homes by 2030 to cut carbon emissions.