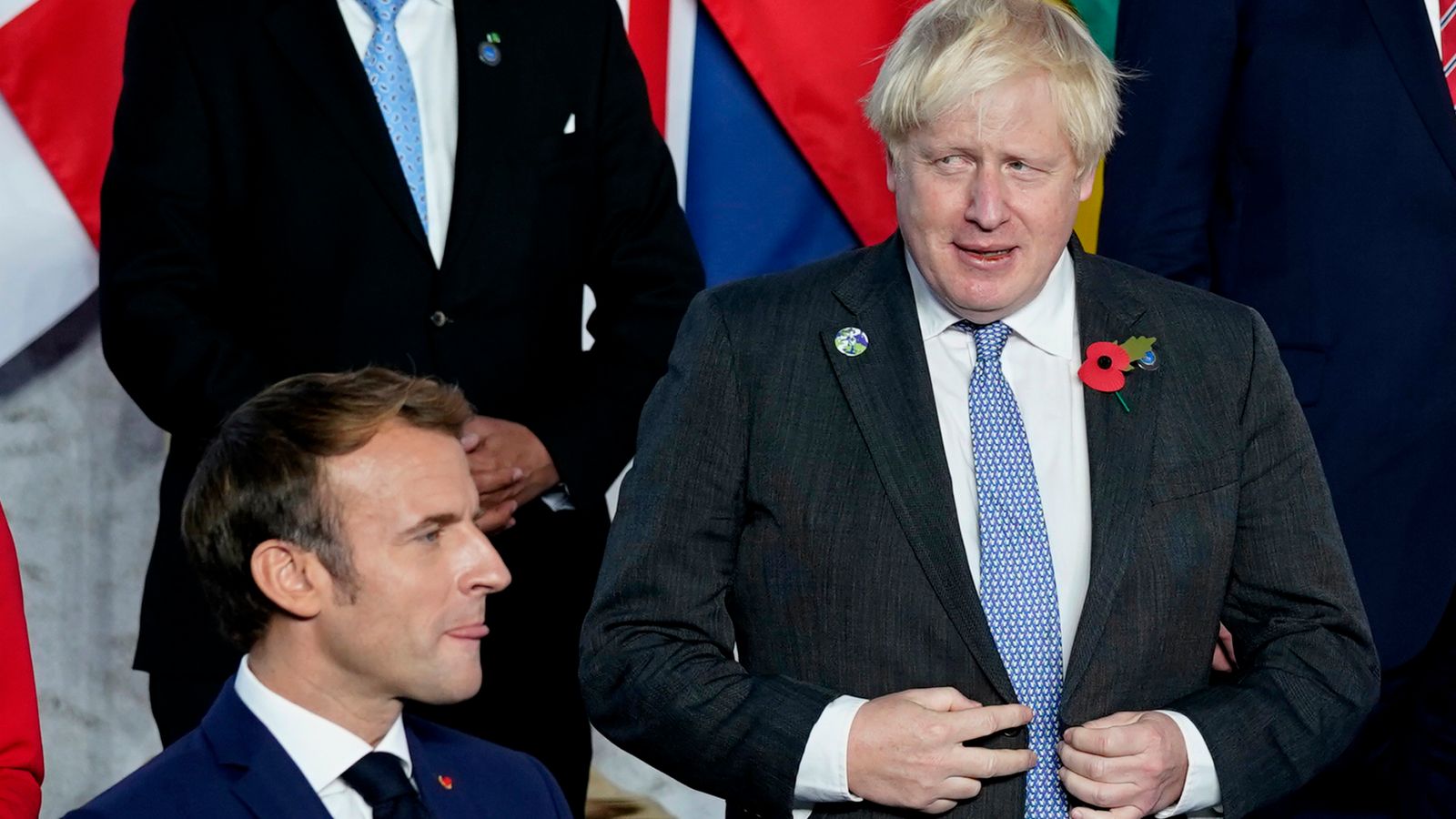 The UK government is “actively considering” taking legal action against France as a row between the two nations over post-Brexit fishing rights continues to escalate.

Boris Johnson suggested to Sky News’ Beth Rigby that France could have breached a Brexit treaty and that he will “do whatever is necessary to protect British interests” if UK ministers believe the UK-EU trade agreement has been violated.

Tensions over post-Brexit fishing rights escalated on Thursday when France seized a British scallop trawler and threatened to block ports and increase checks on boats and lorries over the UK denying some boats a licence to fish in Jersey’s waters.

Image: Boris Johnson and Emmanuel Macron meet at the G20 summit in Rome

Relations between the two nations were frayed further on Friday when French President Emmanuel Macron told the Financial Times that the UK is risking its “credibility” after going back on commitments made to the EU with regards to fishing.

Meanwhile, a letter seen by Sky News shows the French Prime Minister Jean Castex urging the bloc to prove that there is “more damage to leaving the EU than to remaining there”.

In the correspondence to European Commission President Ursula von der Leyen, dated 28 October, Mr Castex states: “It’s essential to clearly show to European public opinion that respecting commitments isn’t negotiable and that it’s more damaging to leave the European Union than to stay in it.”

Mr Castex adds that the EU must demonstrate its “total determination” to force the UK to stick to the agreements it has made on fishing.

Image: Boris Johnson and Emmanuel Macron at the G20 summit in Rome

Responding to the letter on Saturday afternoon, Brexit minister Lord Frost said he was “concerned and surprised” by Mr Castex’s comments, adding: “I hope this opinion is not held more widely across the EU.

“To see it expressed in this way is clearly very troubling and very problematic in the current context when we are trying to solve many highly sensitive issues, including on the Northern Ireland Protocol.”

Also addressing the diplomatic dispute on Saturday ahead of the G20 summit in Rome, Mr Johnson admitted to Sky News that he is “worried” that the French may have broken the Brexit treaty with regards to fishing.

Pressed on whether he could rule out triggering the dispute mechanism against the French next week, the prime minister added: “No, of course not, I do not rule that out.”

In a post on social media, Lord Frost later added: “As I set out yesterday to Maros Sefcovic, these threats, if implemented on 2 November, would put the EU in breach of its obligations under our trade agreement.

“So we are actively considering launching dispute settlement proceedings as set out in Article 738 of the TCA.”

A Downing Street spokesperson said: “If France were to proceed with the threats that they have set out, we will act in a calibrated manner.”

The dispute process would see a consultation period started, after which, if there is no solution found, an arbitration panel would be formed with compensation demanded or even the treaty suspended as punishment, according to the Commons Library.

The row erupted after the UK authorities refused to give licences to 55 French fishing vessels to fish in UK waters because they believed they did not meet the requirements.

But the French claim the British are in the wrong and had threatened to make it difficult for UK fishers and lorry drivers in France.

Tensions escalated further after a British scallop trawler – named the Cornelis Gert Jan – was detained in Le Havre on Thursday.

Image: French President Emmanuel Macron came face-to-face with Boris Johnson at the G20 summit and will again at the upcoming COP26 climate conference

Andrew Brown, head of public affairs for Macduff Shellfish, which owns the boat, said the charge “relates to fishing in French waters without a licence and that’s the bone of contention”.

“We believe we were fishing with a valid licence and the French authorities don’t,” he said.

As well as detaining the scallop trawler, France has also fined two other fishing vessels over the row.

Mr Johnson said: “If another European country wants to break the TCA – the Trade and Cooperation Agreement – then obviously we will have to take steps to protect UK interests.”

“We are very keen to work with our friends and partners on all these issues,” he told Beth Rigby.

Image: Fishing boats moored in the port of Boulogne, France

Asked if he believes there has been a rule-break, Mr Johnson said: “I am worried that there might be – and I am looking at what is going on at the moment, and I think that we need to sort it out.”

Mr Johnson said the UK government “want to see that treaty observed”, but added that “the much more important issue” before world leaders today is climate change.

The prime minister and President Macron came face-to-face at the G20 summit in Rome this weekend and will do again at the COP26 climate conference in Glasgow.

The prime minister’s official spokesperson said: “We have been working with the French government to issue more licences. We stand ready to continue that work.

“We have seen a number of comments from the French government at varying levels in recent days and weeks that we don’t think are justified.”

France says the decision from the UK and Jersey in September to deny fishing licences to French boats was a breach of the Brexit deal.

Brexit: ‘These threats are not acceptable’

French officials have warned that they will prevent British boats from landing their catches in some French ports next week unless the row is resolved by Tuesday.

“The prime minister also raised his concerns about the rhetoric from the French government in recent days over the issue of fishing licences,” the spokesperson said.

“The prime minister stressed that the French threats are completely unjustified and do not appear to be compatible with the UK-EU Trade and Cooperation Agreement or wider international law.

“The prime minister reiterated that the UK has granted 98% of licence applications from EU vessels to fish in the UK’s waters and is happy to consider any further evidence for the remaining 2%.”

Meeting with @BorisJohnson in the margins of #G20.

We talked about #COP26, as well as the negotiations on the Ireland/Northern Ireland Protocol and licensing for fishing boats. @EU_Commission is intensively engaging for finding solutions.

Speaking to Sky News on Friday, Environment Secretary George Eustice said the UK has issued post-Brexit licences to 1,700 vessels, including 750 French fishing boats, which amounts to 98% of applicants.

He said the remaining 55 vessels, despite the UK trying to help them with the data, could not prove they had fished in Jersey’s waters previously so could not get a licence under the trade and cooperation agreement with the EU.

What is the dispute settlement process?

Both the UK and France are currently accusing each other of breaching the agreement, which was formed last Christmas Eve, over licences to fish in UK waters following the country’s exit from the European Union.

The TCA offers both the UK and a member of the EU to trigger a dispute settlement process against another signatory if they are unhappy.

They can request arbitration, a consultation and a tribunal ruling.

The PM warned on Saturday that France may be in breach of the TCA over its threat to block British fishing boats from ports and to carry out tougher checks in the Channel.

Triggering the dispute settlement process clause in the TCA allows the opportunity for the UK to respond to these threats with proportionate sanctions on the French – which could affect boats that do not have permits enabling them to be cleared to operate in UK waters.

If launched, a consultation period would be started, after which, if there is no solution found, an arbitration panel would be formed with compensation demanded or even the treaty suspended as punishment.

Mr Eustice said: “We don’t know what we’ll do, they said they wouldn’t introduce these measures until Tuesday at the earliest, we’ll see what they do.

“But if they do bring these measures into place, well, two can play at that game and we obviously reserve the ability to respond in a proportionate way.”

The French ambassador to the UK was summoned to Downing Street on Thursday over the issue.